This may seem strange, but at 40, and having lived all my life* in the UK, I’ve never lived north of the Thames river.  Sure I’ve BEEN north of the Thames, but I’ve never lived above it.  I once flat-sat in Wilesden Green** for a couple of weeks, and I’ve been camping in the Lake District for a long weekends – but that’s about it.  Is that strange, or is that normal?  What percentage of people move around the country?  For sure lots of people in the UK gravitate to London (as I did) but having come from the South East it wasn’t far for me to travel.  I wonder how many southerners move north? 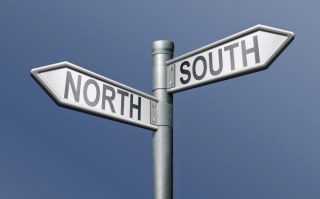 For me, having spent my first two decades in Sussex, and my second two in London, I’m quite excited to move north of the Thames.  But where is it I am going? And once I get there; what am I getting myself into!

Right now, that’s about all I can tell you.  I’ve got a job that’s based in South Normanton which is pretty much on junction 8 of the M1.  This is spitting distance (an hour) from Nottingham, Sheffield and Derby but is very close to the peak district which is dotted with lovely picturesque villages and towns.

So the question is Urban or Rural? City or Town? Bars and restaurants, or pubs and markets.  House or cottage?  Radiators or wood burners?  Electricity or Oil lamps?

OK, so maybe that’s going a little far – but you get where I’m coming from, right?  For me its an easy choice.  I’ve just bought a car and I know where I’ll be working so its small village and a cottage with a wood burner or Fireplace somewhere near the peaks – that would be perfect!  However I also have to take into account that Kate will one day soon (hopefully) come back to the UK and move north with me.  What will she want? Where will she work? This makes it slightly more complicated.  That said, with a short term let (6 months) nowhere will be a disaster!

So the questions I have are:

Does anyone out there have a (positive) recommendation for a village for me to live in?

What is the cost of a pint up there?

Where is good for a flat run? And what about a hilly run?

And lastly – Where are the good boardgames shops up north?


*Apart from the last year whilst I have been travelling – did I mention this at all recently?
** North London
*** Or just leave a comment here

One thought on “Moving North”