Having roused ourselves from slumber early enough to catch the boats, we set out for the spiritual home of the Incas. Don’t ask me why it is, we never found out, but it was something to do with the sun rising from the lake or island. Sometimes not speaking Spanish well sucks. Still, regardless of what the Incan’s thought of the island, it is very beautiful. The boat trip there could have taken 20 minutes but due to either lake boating regulations or the desire to use as little fuel as possible, it took 2 hours. I guess there are days when this is wonderful; a two hour cruise across a lake with paneramic views from above decks, but alas this day wasn’t one of them and although it was bright, it was cold, which left a slight dread for the 5 hours of hiking ahead of us. 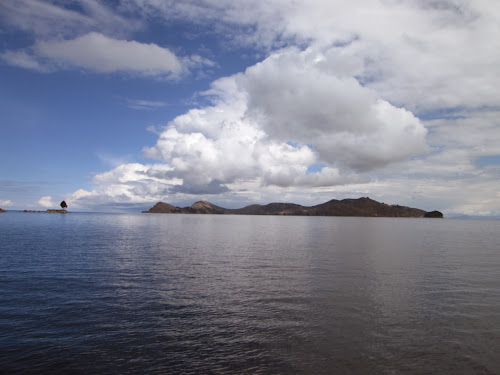 Luckily the sun’s warmth finally broke through once out of the breeze that blows across the lake so the day (litterally) warmed up for us and we got off the boat with much gladder hearts than in the two hour crossing. 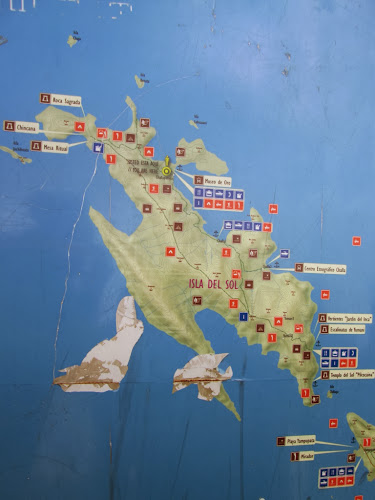 The island. We got dropped in the north (by the yellow man) walked further north (to the blue marker) before heading South across the tops of the mountains all the way to the South Eastern port

The island is actually ‘hills’ however as the lake is at 3800 Meters the hills classify as mountains. An easy way to bag a few 4000+ Summits if you are keeping lists. (Which if course, I am not). The day turned into a scorcher and rather than describe it, here are a few pictures. Of cause, they never do it really justice, but Kate’s very sunburnt nose over the following few weeks of pictures was a much better daily reminder of the day. 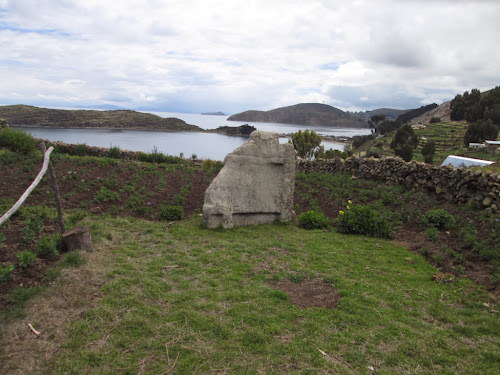 One of the few (supposed) Incan ruins. Criminals were sacrificed here 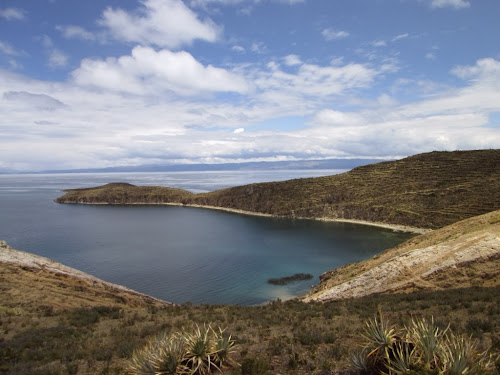 One of many beautiful bays 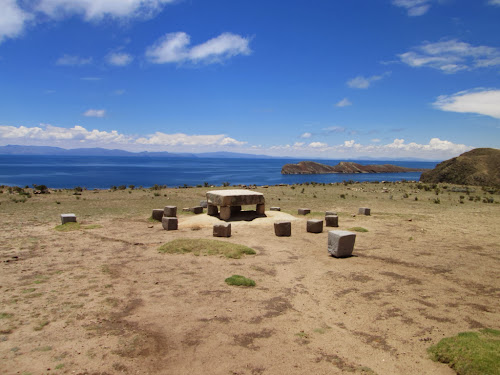 One of the ‘other’ ruins. This one for virgins (and llamas). I suppose if you are going to sacrifice virgins you should at least give them the prettiest view 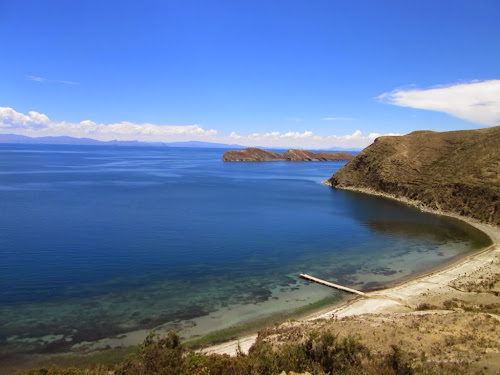 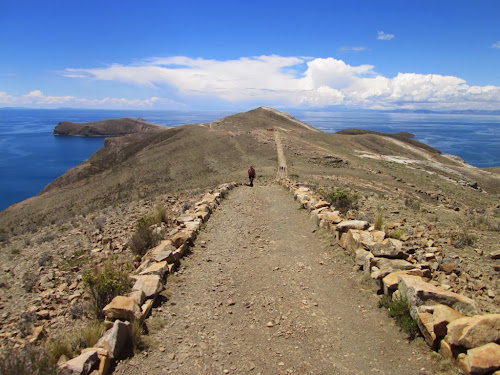 Those Icans loved to build roads 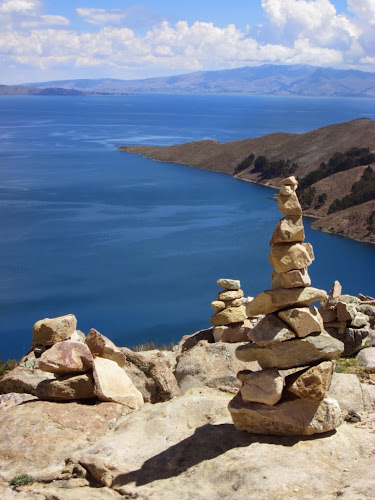 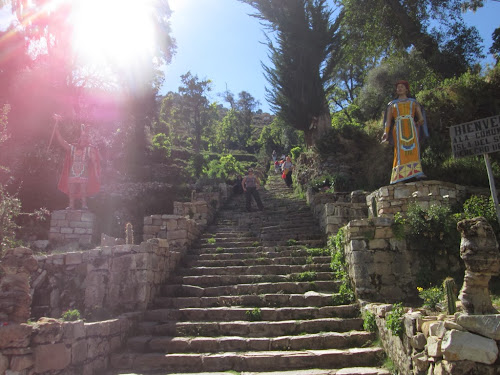 Our return to Copacabana was just as long but our exertions and the sun made it infinitely more enjoyable (plus we had inside seats with cushions instead of being on top of the boat). The next day, after a suitable lay-in we caught a local bus (very smelly bus) to La Paz.

What a shit hole. It’s one if those places you either love or hate. Our journey into La Paz took us through what is definitely the biggest, shittiest, construction site of a suburb that I’ve had the displeasure of ‘passing through’. We only had plans of spending two nights here; we arrived on Saturday and had flights to Sucre on Monday. We were here for DEATH ROAD.

However. Two other awesome (I may over use this word a little now-a-days) things happened. Firstly, out of blind chance, we ended up in a hostel on San Pedro Square directly Oposite the prison, and secondly, thanks to a lonely planet suggestion, we went to ‘Diesel Nacional’; a very cool bar.

If you haven’t read ‘Marching Powder’ by Rusty Young, then it won’t mean a great deal to you. If you have, you’ll in some degrees empathise with my child like excitement of being nearby. For those in the dark; it’s a story of a guilty as hell drug British smuggler sent here for obvious crimes and his struggle for survival in a system so currupt that prisoners have to buy their cells from the guards and pay for their food. Oh, and at the time of his tenur, it had the best Cocaine labs in Bolivia! It’s a great read. I insisted (much to Kate’s amusement) we walk all round it (and take lots of touristy photos)! 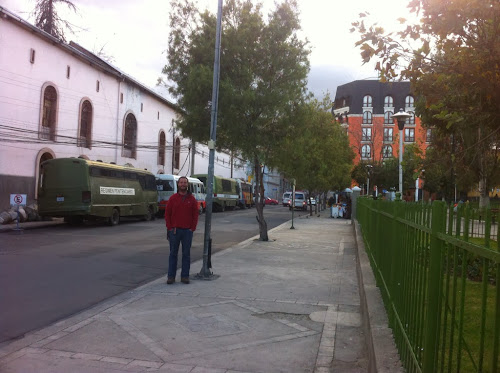 Its not often on my travels that I have been to bar and thought ‘this wouldn’t be out of place in London’. In fact this place would put a lot of London joints to shame. I don’t have any pictures, and I shan’t harp on about it, but it was a cool bar playing cool music and decked out in ‘diesel head’ parifinallia (engine parts, rotors, jet engines, and nuts and bolts for the main part, along with some brass instruments (trumpets etc.) hanging from the ceiling!). If you are ever in La Paz be sure it look it up.

A very menancing accolade. It’s a road just outside La Paz that traverses the mountain side down from near 4000 meters to around 2000. It’s got sharp turns with vertical drop offs and once held all traffic heading to La Paz from the South and in its hay day with big lorries heading in both directions it surely was dicing with death. Now-a-days it’s a tourist cycle road with a few cars. It still has sharp turns and vertical drops, but unless you are a moron you should be able to cope with these. It’s a sad fact that people still kill themselves on this road each year through stupidity. Talking of which, a chap in the group in front of us tried to win a Darwin Award; having stopped to take in the ‘grand views and vertical drop on the side of the road’ he promptly tripped and fell over the side. He lived to tell the tell, having fell 40+ meters, and so I feel I can add the photo his rescue here: 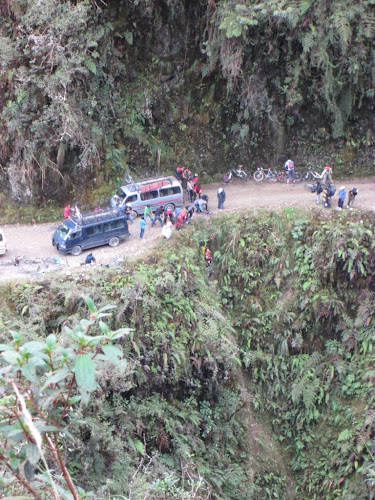 Needless to say he caused a traffic jam

Our Death Road adventure was far more sedate with no (major) accidents or falls. Riding down hill may be easier cardio, but it does take its toll on on the wrists/hands and nerves. Few beers at the end of an excursion have been so welcoming. 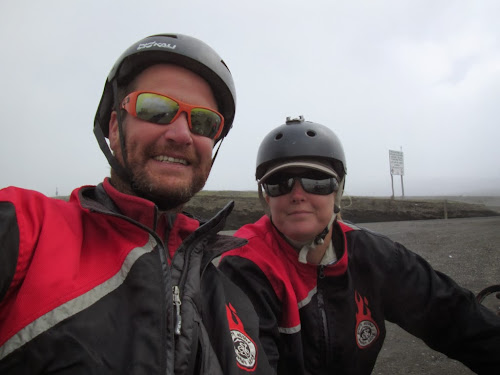 At the start; geared up and ready! 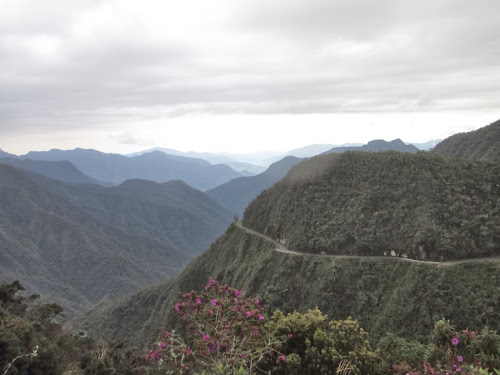 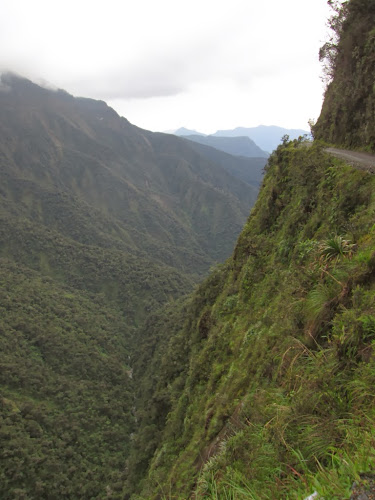 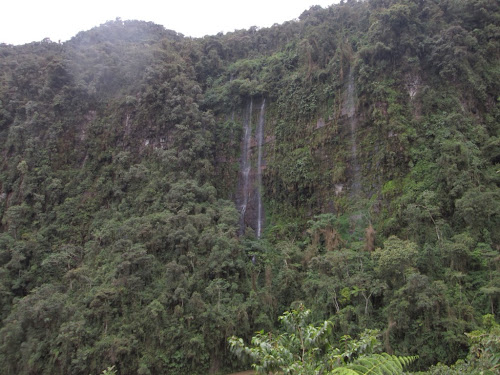 Lots of waterfalls along the way

At the bottom of the ‘hill’ there was a series if zip lines (3) which had been built as part of a sustainable tourism project to encourage tourists doing Death Road to spend a little money locally rather than just getting into the awaiting vans and heading back to La Paz. Although way over budget for the day we decided to go for it.

Although not the longest, highest or fastest zip lines we have done (Hawaii wins on this) they were great! We did them with another couple from London, Rob and Lianne, and amusingly both girls had issues building up enough momentum to guarantee getting to the other end without effort. This meant that for the last (and longest) line they decided to go tandem (together). Oh the screams will ever amuse me. 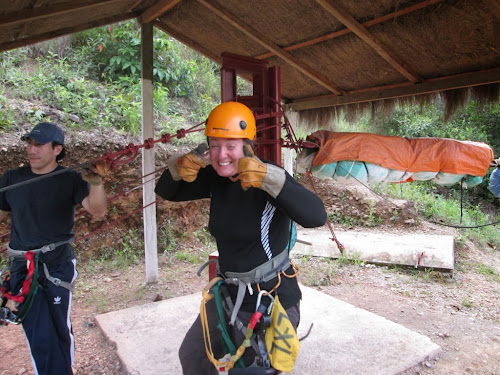 It was a nervous excitement apparently 🙂 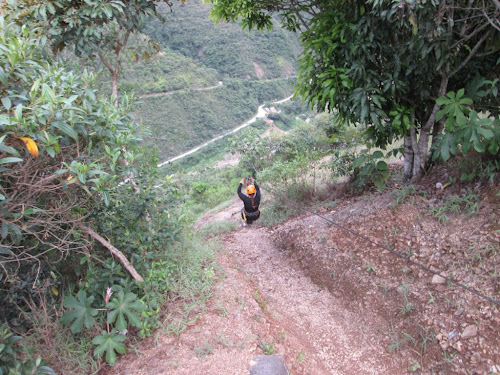 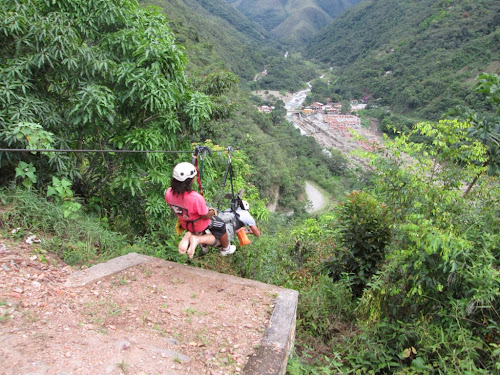 Rob does it superman stylee 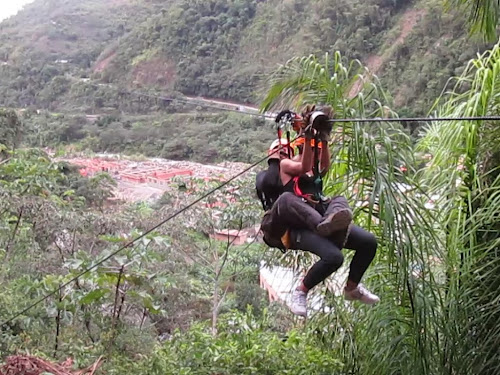 The girls arrive on the last line. Screaming all the way. Not sure exactly what Kate is trying to achieve with this ‘hold’ 😉

If Death Road and zip lining wasnt enough excitement for one day the to top it off we visited a monkey Sanctury. It needs no further introduction. 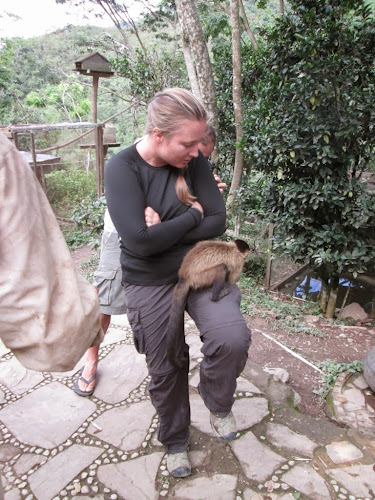 Some of them are recovered from lives of crime. This fella is an expert pick pocket 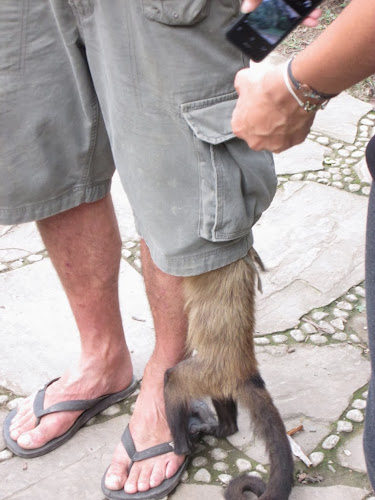 And there are various ways of getting to each pocket 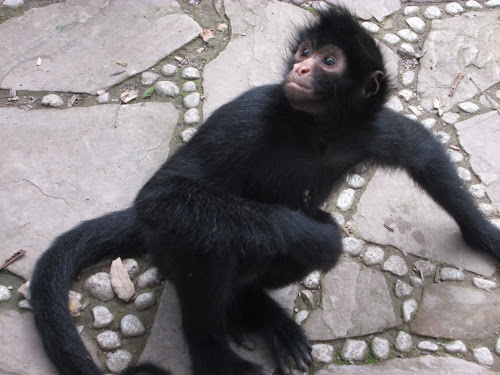 This guy couldn’t give a monkies (hahahahaha . . . Gedit?) 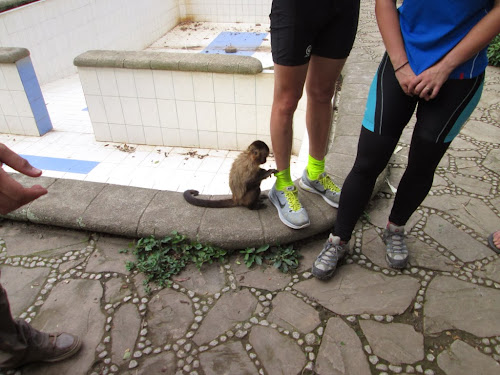 Not a pocket, but he knows tourists well

And after all that we returned (via death road) to La Paz, briefly stopping under a waterfall on the edge of a vertical drop so I could take this photo. Death Road is certainly more dangerous for vehicles than it us for bikes. 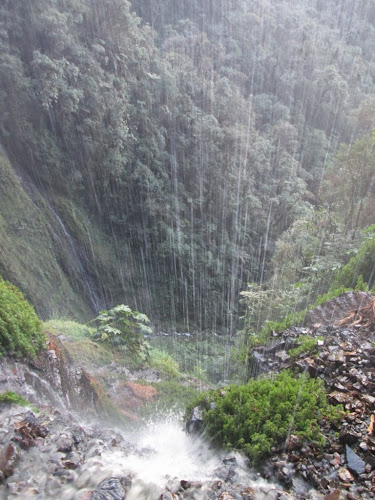 Next blog; Sucre for Christmas!!!