Leaving Hauraz we take an overnight bus to Lima. Want to make the most of our one day in lima we opt for a THE MOST EXPENSIVE seats we can get and I have to say it was worth it. Busses in Peru aren’t fantastic, but this was splendid. Fully reclining seats, nice plump bed pillow and a blanket. I was asleep almost before we pulled out of the bus terminal.

We got to lima around 5am and had prebooked our night with a hostel called the Condor who were fine with us turning up early. As it happend, when we arrived half the hostel were up doing Yoga, and a few of them hadn’t been back from the clubs long! (Ooooh to be young). The most out of it chap there happened to be the manager, an extremely likeable chap, either drunk or high, or both, but very amusing. Kate immediately crashed out but I decided to have a coffee and some breakfast (hastily prepared early just for us) before taking a shower and then heading to the BRITISH embassy. New Passport here I come!!!

After a short walk to the embassy, and a painful and embarrasing (but luckily short) telling off by the embassy staff (we are not a parcel delivery service) I finally got my hands on my new passport! 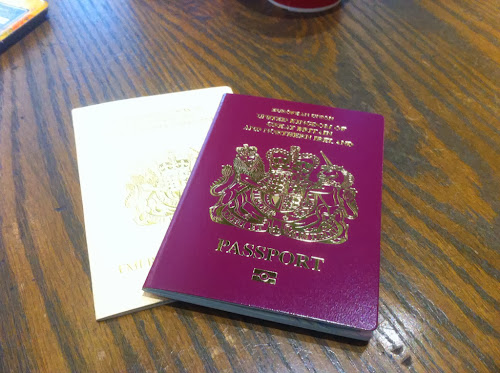 New passport with the Emergency one. I am a man with two passports!

“Why did you get told off?” I hear you ask. Well, it’s turns our Kate had conspired with mother to get some new M&S underwear sent over and mum had decided to do a family collection of Christmas cards so as well as receiving the *essential* documention I required to live, a parcel had arrived containing all sorts. Let’s hope the govement aren’t keeping records of this shit as I don’t want to have face accusations of being a cross dressing consular time waster. Still, it didn’t come to violence and they didn’t charge me for it so all is well, and I have to admit it was quite nice having all the cards come Christmas Day. I celebrated by having a Star Bucks (which was next to the embassy) which left me feel a little dirty but it was jolly nice too.

I return to the hostel, wake up Kate, and then we proceed to hit the city. We don’t do too many big city touriesty days but by god we hit Lima like professionals. 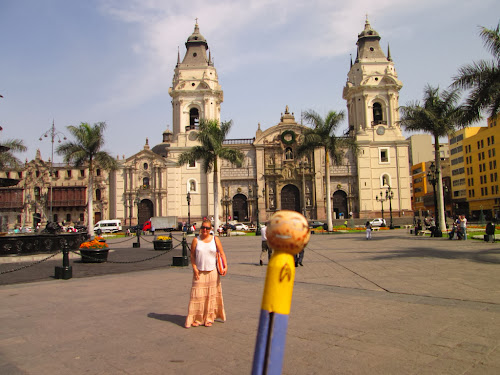 Kate and Stevepeg in the Plaza De Armas 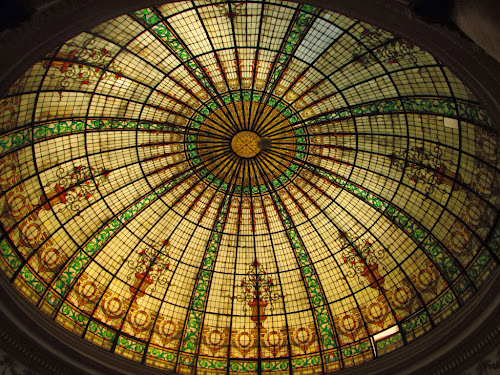 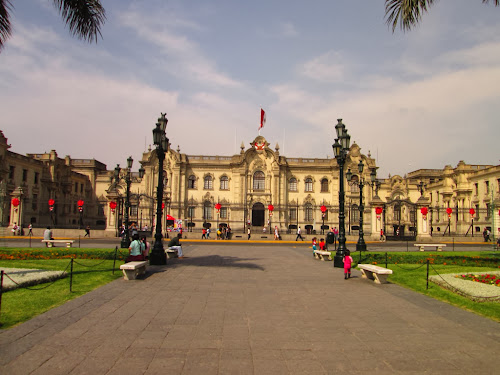 The presidential Palace complete with guards in silly uniforms 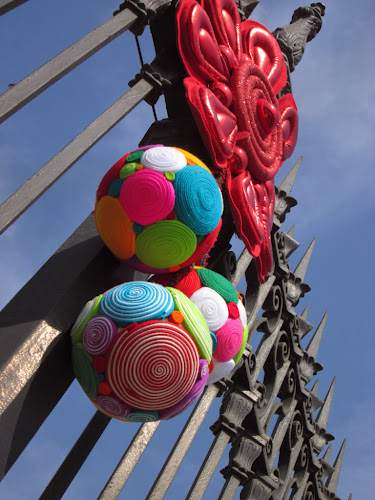 Some balls hanging on the presidential gate. No signs to indicate whose. 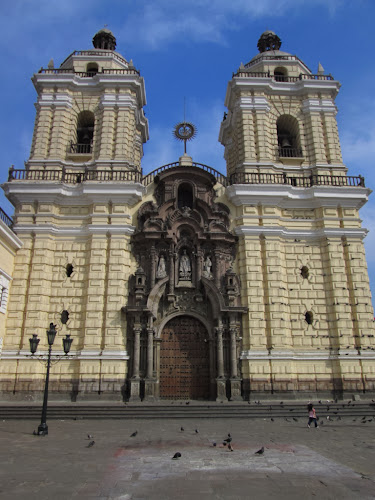 A church with catacombs! Lots of bones under here but no cameras allowed! 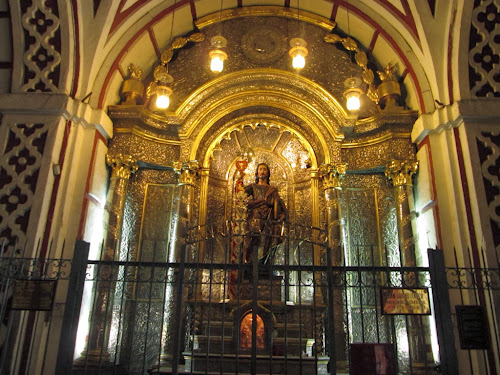 Some chap with an ego 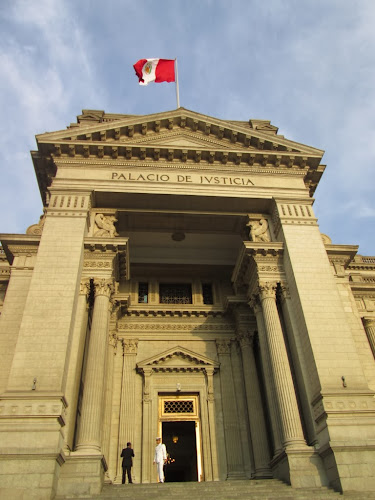 The palace of Justice. No expense spared – it’s MASSIVE. 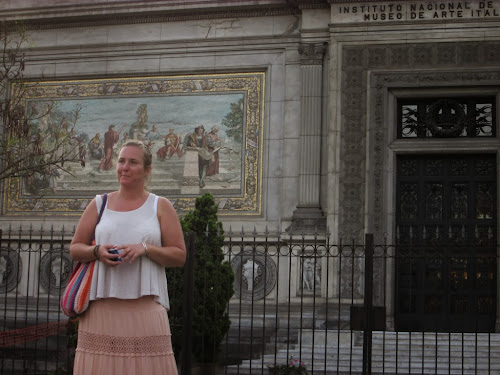 An Italian art museum. Closed but pretty from the outside. 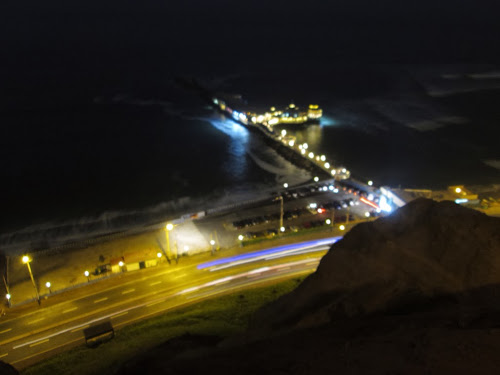 One of the city peers by night. I played around with the camera settings to achieve my first ever blurry lights effect. *proud moment*. 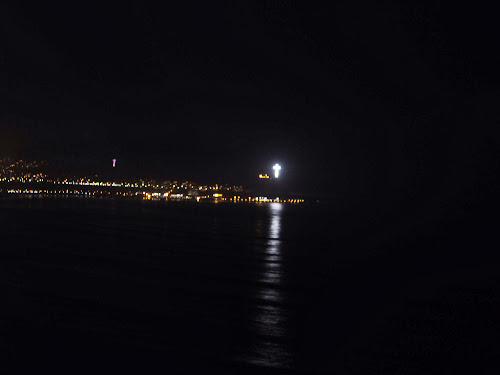 A bright cross at night. They love these over here and you’ll find them on most major hills near a city.

Having sprinted round Lima we flew out the next day to Juliaca, a small town near the city of Puno on the shores of lake Titicaca. We had no intention of staying in Juliaca, it was simply the closest airport to Puno and the border with Bolivia. Our plan was to jump on a coach to Puno, stay the night, explore the lake area and then move on into Bolivia the next day. We arrived at Puno around midday and on the way in I am reminded how run down the place is (I visited in 2006) and some friends who had visited recently also said it wasn’t much fun, so during lunch we decided to change our plans and instead head directly for Bolivia. Lunch done, beer drunk, and photo/Facebook update completed, we jump on another coach and headed for the border. 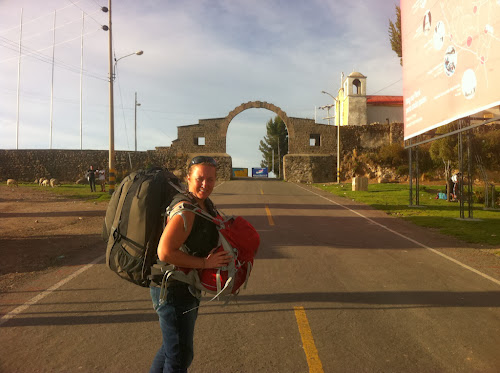 Would you believe I couldn’t use my new passport? When crossing between land borders they are very hot on making sure you have ‘stamped out’ of the previous country. Because my new passport was blank they wouldn’t let me use it! I tried to explain this wasn’t logical (in very broken, child like Spanglish) but to no avail! A wait of 10 minutes to speak to the supervisor got me nowhere and they ended up agreeing to stamp my emergency passport. FFS! this would not be the end of my passport woes!

Once finally across, a three Bolivianos taxi (30p) saw us delivered into the Plaza Major of Copacabana. Not the one from the song. This is a small town nestled between two hills on the shores of Lake Titicaca (the Bolivian side, obviously) and the famous(?) Isla del Sol; spiritual home of the incas.

whilst I sat and watched the bags (and drank very refreshing dark beer) Kate jogged around town looking for somewhere to stay and I have to say; the girl did good! For B$200 (£20) we got a massive room, with a bathroom the size of some rooms we have stayed in, plus our own private garden accessed by double doors in the room – all right by the lake! What an awesome find! It even had internet which always pleases me greatly.

The next day we had planned to visit top the afore mentioned Isla del Sol however we managed to sleep in and missed the boats. Many boats head over to the island each day, but they all leave at 08:30. All of them. Without fail. I got up around 08:40 to go and find out about our day trip only to discover the bad news.

We wandered around town a little but that really doesn’t take long, so after a very leisurely morning and lunch I decided to get my running stuff out and go for a run. You can read about that HERE if you haven’t already and I can thank that little army of mini Santas mentioned in my last post for the inspiration. Thank you Santas.

Next blog; Isla del Sol and onwards to La Paz!