Hauraz is high in the Andes in the centre or Peru and I convinced Kate to go there to do some mountain trekking. Nothing too hard core, just a few high Altitude (4000m+) non strenuous walks. And I am so glad we did as it was absolutely beautiful.

I like hiking. I like it a lot. For some reason I get a really kick out of hiking up things; hills, mountains, volcanoes, valleys and canyons (although they all generally involve walking down too – it’s just I prefer the up sections). I realised when we got to Huaraz that I am much more of a mountain man than I am a jungle man. For all that there is less oxygen and just breathing can become tiresome, there are also less mosquitoes. Give me a view over hundreds of miles, looking down on clouds, rather than the heat, closeness and encompassing press of vast jungles.

To say I was happy as a pig in shit would be an understatement. I could (time permitting) happily have stayed and hiked for weeks in this area. Alas we don’t have that kind of time left and as mentioned before, I promised Kate nothing to tough, so we booked ourselves on a couple of hikes and in-between those had a day riding some fantastic horses at The Lazy Dog Inn – a small farm just outside of town run by some lovely Americans.

Hauraz itself isn’t a particularly a pretty town, but it’s nice enough and contains enough bars and restaurants to keep you occupied on any visit. Your won’t be here to ooh and ahh at the colonial architecture or pretty plazas – you’ll be here to see the mountains!

Our first trek took us a long a fairly flat valley floor ending in a Laguna under a glacier. We caught a taxi to the valley entrance which starts a 3950m above sea level and then walked 7km along the valley to the Laguna which is at 4200m. 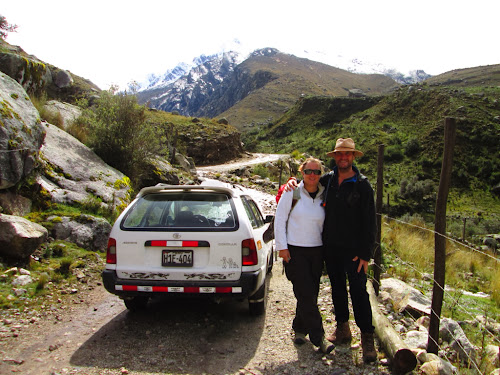 At the start. Dropped off by a taxi. Looking ready!

It was a beautiful fresh mountain day. Blue skies, fresh crisp air, no noise pollution. Just us, some llamas, donkeys, birds and occasional ferrel dog (South America as a whole has issues with dogs). We set out for a beautiful walk. 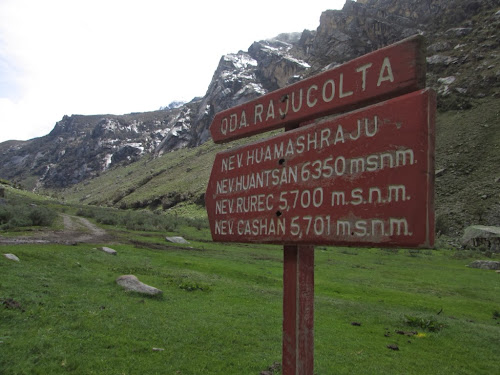 The mountains in the distance – names and summit altitudes 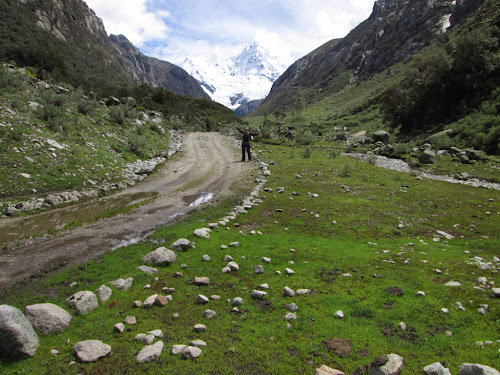 Kate showing us the way 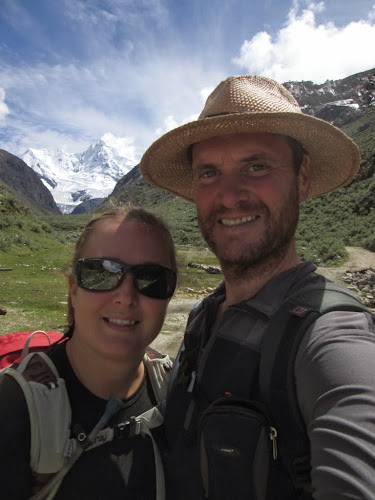 A selfie. It’s the COOOL thing to do, right?

We’re feeling so cocky on the way up, we make ta short video explaining our delight; VIDEO

We then plod on and eventually get the lake where we feast on a picnic and sit back to enjoy our accomplishment, which is about when the coulds roll down the mountains, it’s starts to hail and the wind picks up. Oh well, serves our right for being cocky – time to walk out of here! 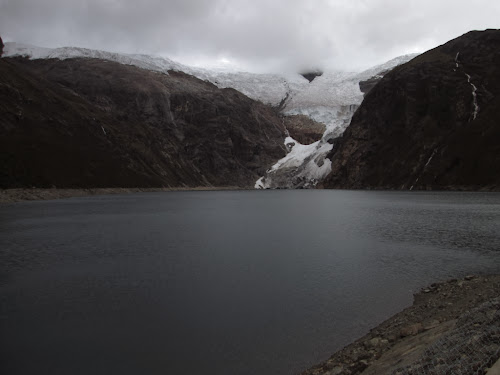 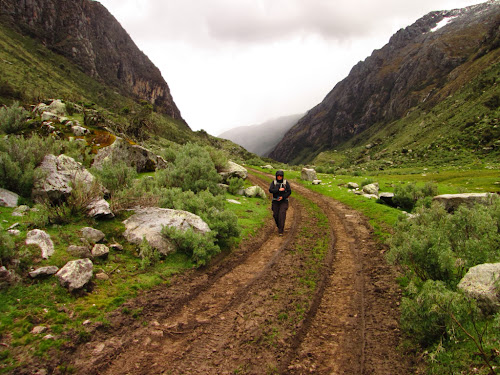 Walking out with the rain chasing us down the valley

It takes time, and my poor hands got very cold (I didn’t at this point own any gloves) but we made ute safety back to our taxi just on the edge of the rain. 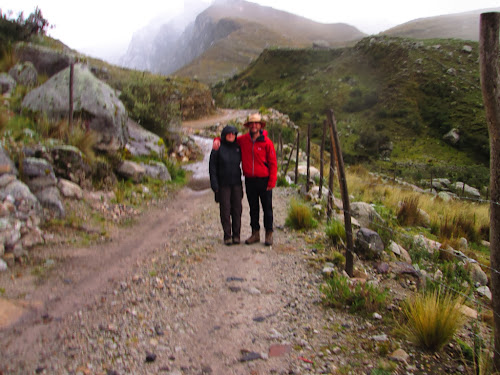 Our next hike was even easier. We caught a taxi to the starting point of a quite tough trek to Lake 69, but then walked back down the valley past two beautifully blue lakes. The hike took three hours and was again around 3800m altitude again but unlike our previous hike today the sun stayed with us all day. The walking was very easy so I’ll let pictures say the rest; 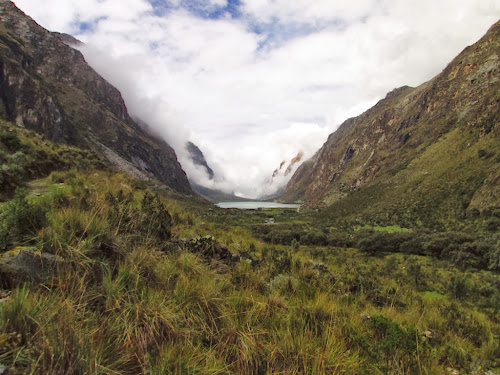 At the start looking across the valley. We’re actually above the clouds here. 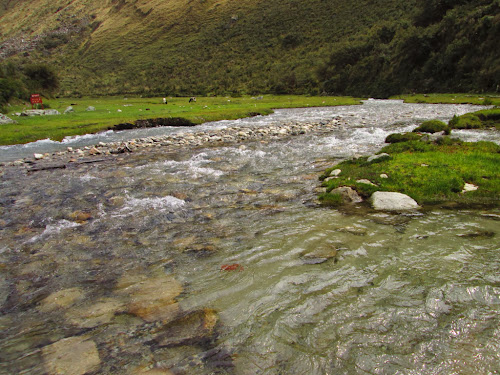 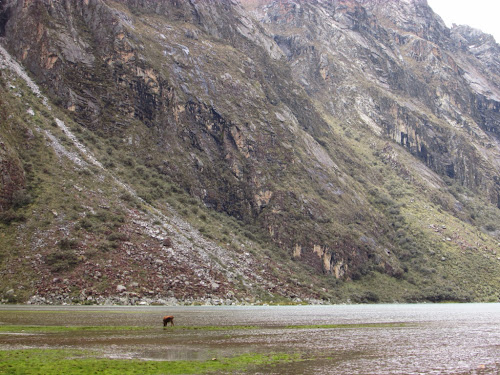 Approaching one of the lakes 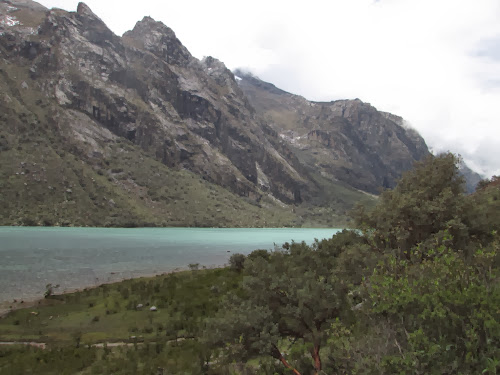 The sun starts to shine onto the lake transforming the colour 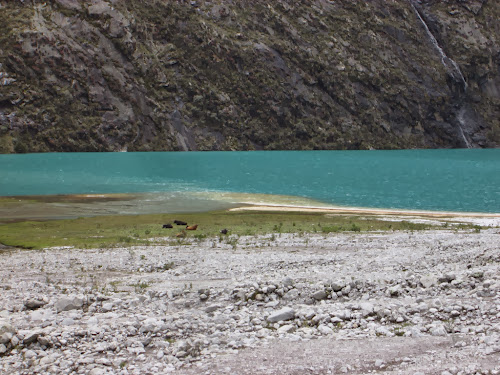 Start of the second lake, it’s getting bluer! 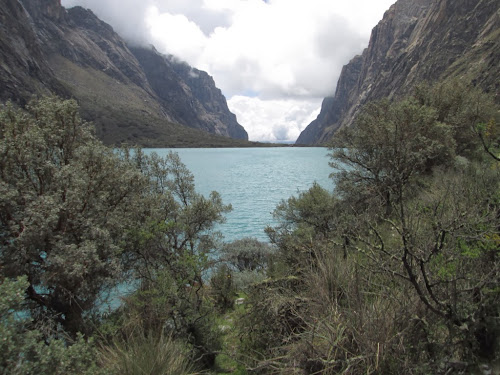 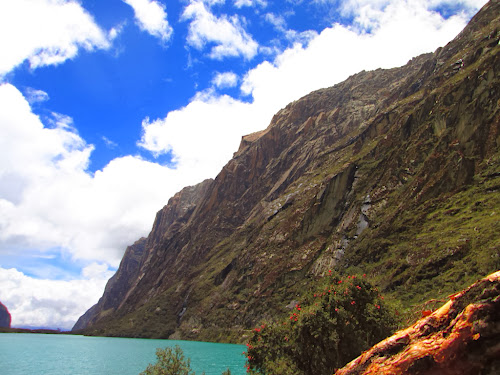 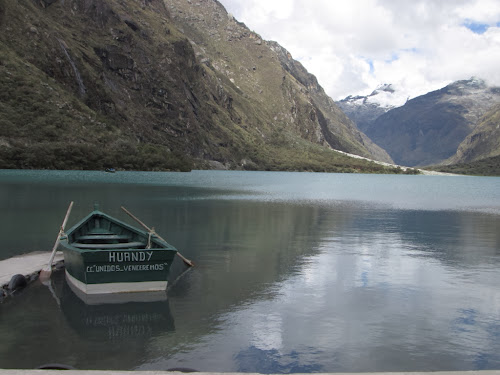 In the shade at the end of the lake.

As mentioned, we popped up to The Lazy Dog Inn to do some horse ridding which was really cool. They actually make you brush the horses down before and after the ride to build up the ‘bond’ with the horse. Personally I think this partially just so they don’t have to do it themselves but it was a cool thing to do so I forgive them if this is the case (and hope they forgive me if it’s not). 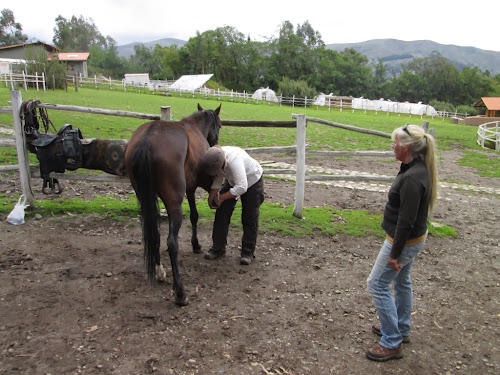 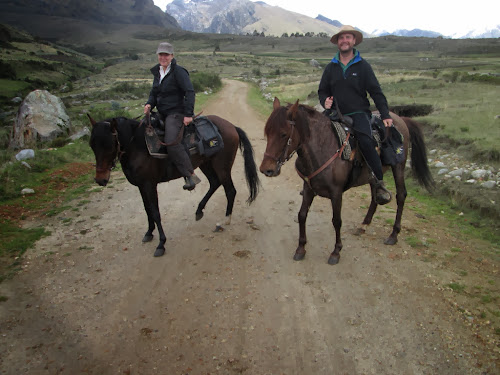 Out on the road

They also have 4 dogs, all of which happily live up to the name of the inn (Lazy Dog). One was this wolf like chap with white eyes. 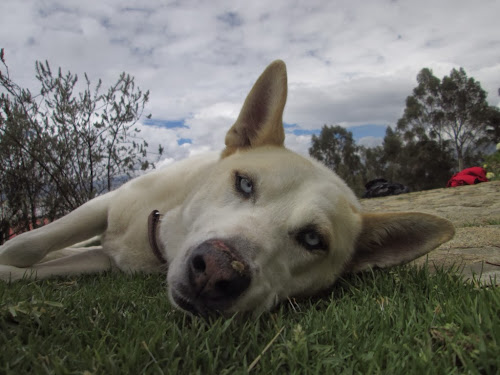 Wolfie! (Not his real name) he was very cute

Whilst we were in Hauraz there was an organised fun run – The Santa Dash. I hadn’t run for months but was tempted to sign up as it was only (ha!) a 6k. I didn’t, but we went along to the start to wave and cheer them off. It was a somewhat smaller event than I had anticipated! 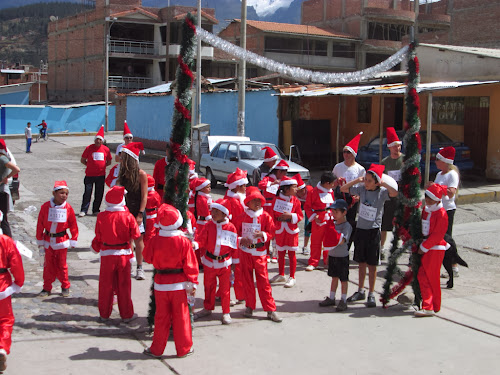 There were about 30 entires of which only 6 were adults. It’s fair to say though most even the kids would have thrashed me so it was probably for the best (for my pride) I didn’t run, however I can attribute these kids as being my inspiration to get my running shoes back on the following week and doing a 5k.