At last we have arrived in South America! 🙂


Cartagena is a fantastic city. It’s got old and new towns just like Panama has, it’s also set along the coast just like Panama, but given the choice of the two, Cartagena wins every time. An old Spanish fort dominates Cartagena from behind and impressive walls almost encompass the old town (except where they have been removed for ‘progress’). The old town has great colonial buildings and plazas and is dotted with cool restaurants and bars. There are even a couple of bars on the city walls giving great views both of the sea and the sunset but also into the narrow streets of the city below. We stayed in Getsemani, which is inside the city walls but outside of ‘central old town’. It’s where the backpackers hangout and is a little cheaper (but only 5 minutes from central) Here’s some photos; 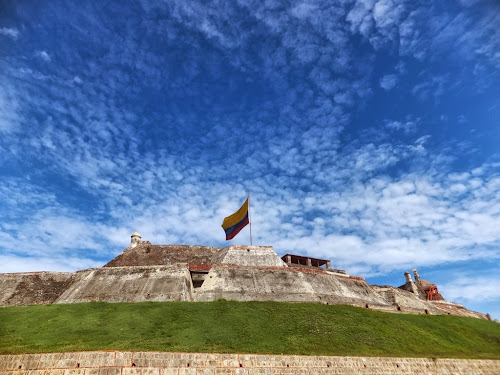 The Fort – built over a hill and with tunnels going deep within it you can explore at your peril! (Flash light a wellies required). 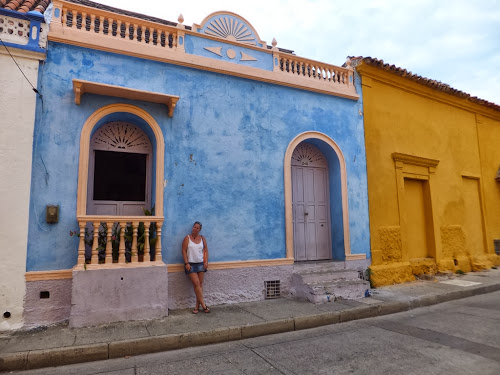 Kate blending in on a Cartagena street 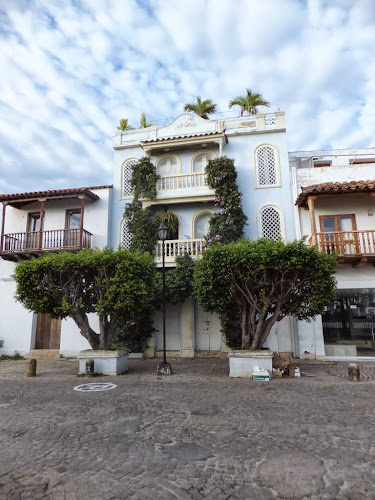 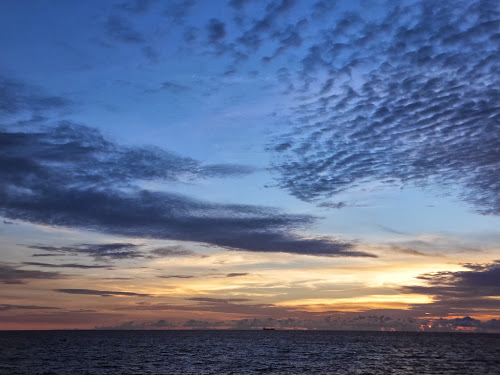 The view to sea from the city walls at sunset 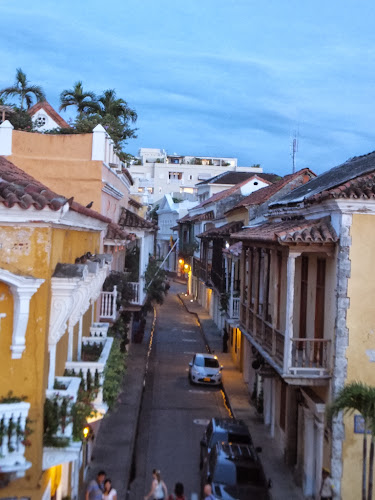 A street from the city walls at dusk 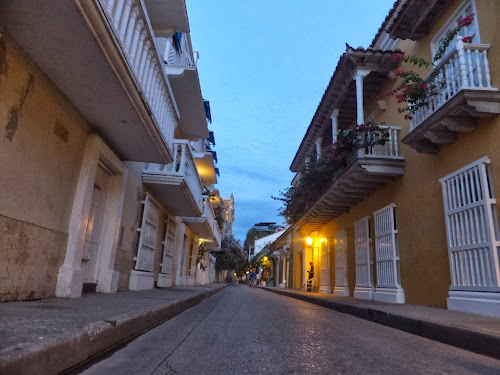 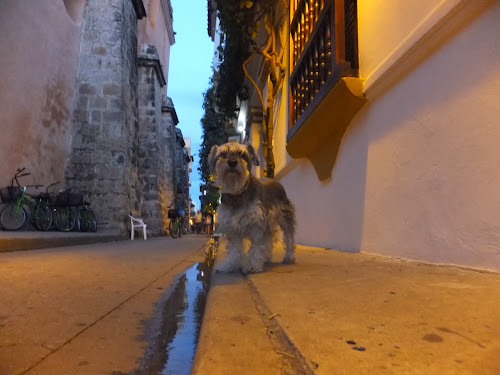 Every street has its king 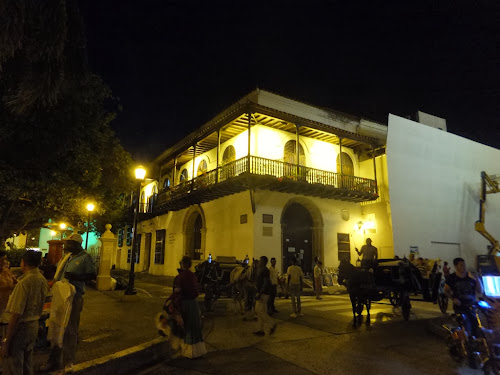 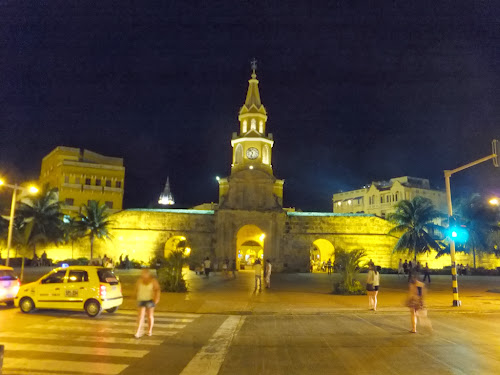 The city wall and clock tower 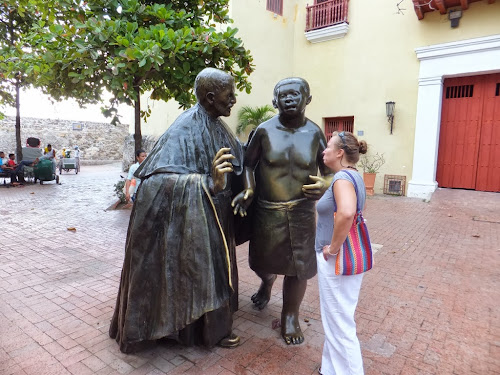 Kate chatting to some locals 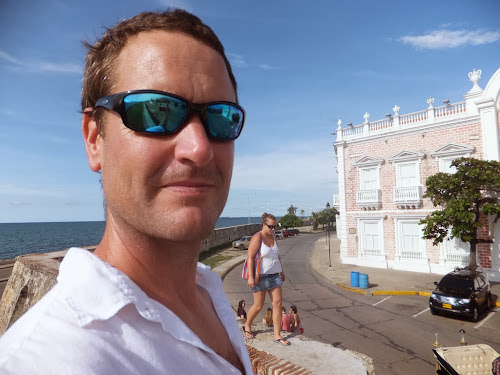 Walking the wall. It’s not so thick in some places! 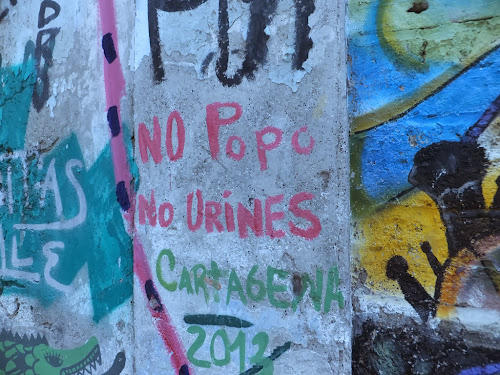 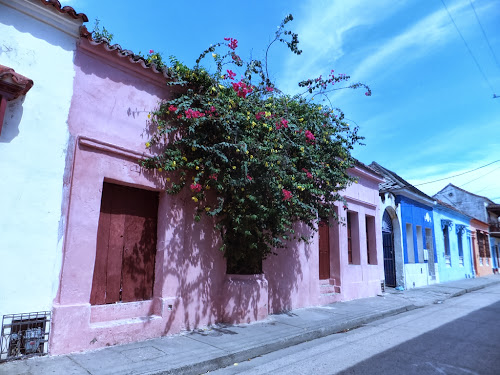 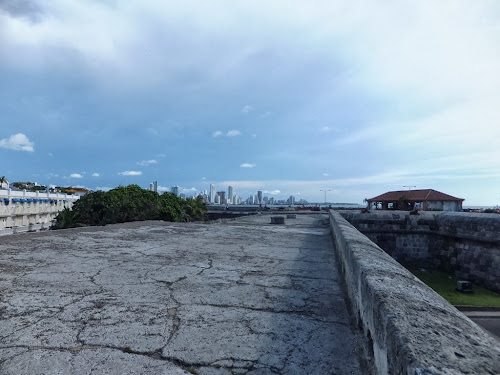 We spent about 4 days here exploring and getting used to the money (I hate 4 digit conversions!! £1 is C$2900!) and drinking. We like drinking. We also met up with young Jermey whom I met on my boat from Cartagena to Panama in May and who now lives in Cartagena with his girlfriend. We met at a local bar/restaurant where his girlfriend works as a chief and watched the Colombia vs. Ecuador World Cup qualifier. Yes, you read that right, I watched a football match. All of it! I even bought a shirt for the occasion!! (Fake, of course. £5). 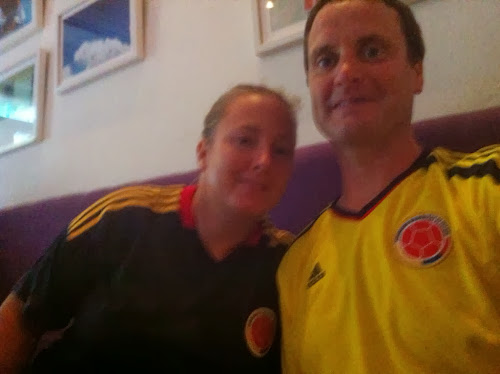 Check us out! COLOMBIAAAAAAAAA!!!!!
We also explored the fort and I was really captivated both by its design and its history. It’s massive and broad and it covers a hill. They literally covered a hill in thick brickwork which in itself is warrened with tunnels and then tunnelled into the hill itself. In the main part of the fort there is section of tunnels that is only lit half way down up until the point where water seeps into the tunnel to ankle deep. You can go further and the water gets to knee high but it’s not lit and you need to let the guards know you are going down there – explore at your own risk! I do love this non H&S crazy environment that works over here.
Palomino
After two cities in a row and almost a month since we had been to the beach we decide it was way past time to get back to the sand and sea. We jumped on a bus heading east along coast aiming for Palomino. This involved a bus to Santa Marta (5 hours) and then another bus which would drop us at the village on Palomino (about 90 minutes). Without reservations we arrived at Finca Escondida at sunset in time to dump our bags in the dorm and grab a Cuba Libre and sit in the beach to watch it descend below the horizon. The sea here is pretty rough with strong currents so is not great for swimming, but jolly good fun for wave diving and body surfing – which we proceeded to do a lot of in the following days. We came to relax for a couple of days and stayed 4 doing nothing but reading, swimming, sunset watching and rum drinking.
The sand here is glorious white and the beach is very unspoilt both in terms of development and litter. Days drifted past slowly and calmly. 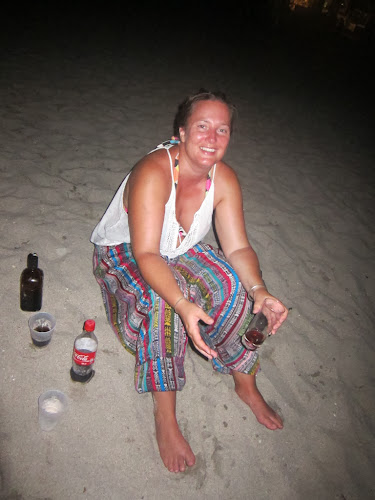 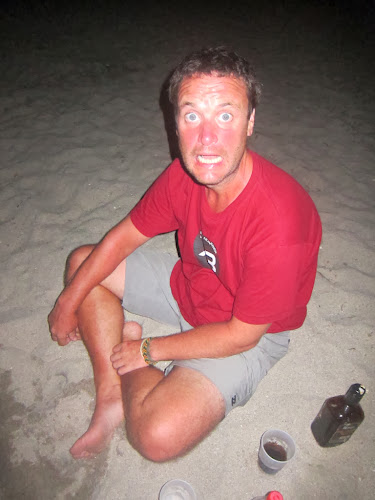 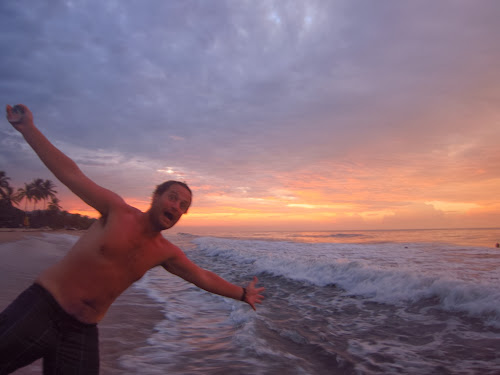 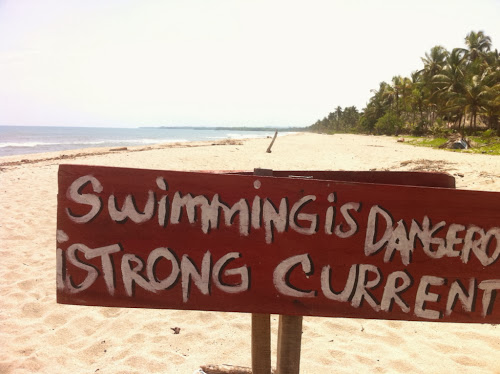 Riohache
Further along the coast from Palomino is the city of Riohache which is the jumping off point for some very remote beaches even further east. We decided to head here to check out the options and costs of going further east but also because there was a wildlife sanctuary near by where Flamingoes flock to for a few months of the year, and as it happens it was this month! The coach from Palomino was 2 hours so we took it easy and set off around midday. Arriving in Riohache we were surprised by just how developed the city was as for some reason we had expected things to get less developed the further east we went. Though not particularly a big tourist destination there was a couple of hostels here and we stayed at Hostel Mi Casa which is small and a little prison like but clean and friendly. Riohache has a long promenade which is lined with locals selling woven wares to the mainly Colombian tourists and several bars blaring out music at levels only Latin Americans could bare. We stayed for two nights, deciding not to venture further east (for reasons I still can’t quite remember but that were valid at the time I am sure) but we did go looking for the flamingoes and enjoy a fantastic sunset along the promenade. 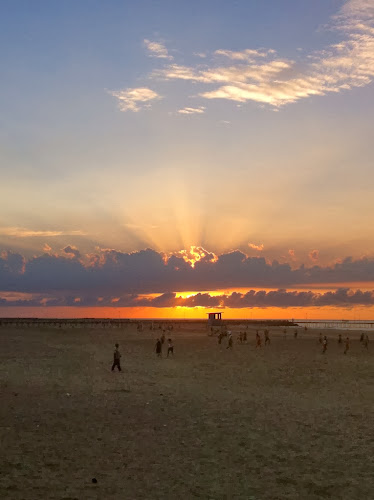 The Flamngoes; We jumped on a bus heading back west and asked/paid to be dropped at Camerons, the local village for the sanctuary which was supposedly 15km out of town. We chatted and watched the countryside go by and it wasn’t until we realised we had been on the bus for 30 minutes we wondered if perhaps we had missed it. Suddenly though we were at a road checkpoint (there are quite of few of these in Colombia, manned by the army and they do random checks of papers and luggage/cargo) and the conductor shouted for us to depart. Phew! As the bus pulled away we suddenly realised we were in the middle of nowhere. No signs. No road turnings. Nada. Just the check point.
I wandered over to to the army chaps and using my best Spanish asked where Camerons was. After repeating it a couple of times they pointed back the way we came and said “20 minutes”.

We chatted to the Army chaps explaining the situation and before we know it they stop the next bus going that way and tell the driver where to drop us – and they do! For free! Awesome. I wish we had taken a picture of these guys as they saved us a lot of trouble.
There was little information about the flamingo reserve other than it was reached via the town of Camerones so we walked through the village looking for signs. We ended up walking a very long way being touted by mototaxi’s all the way (motorbike taxis). It was a pleasant (if long) was to the beach where the visitor centre was and as it turned out, rather pointless as the centre was closed. However, we paid a local chap some cash two canoe us out into the lake so we could get a closer look at the small flock of flamingoes we could see there (like a little pink island in the middle of a lake). 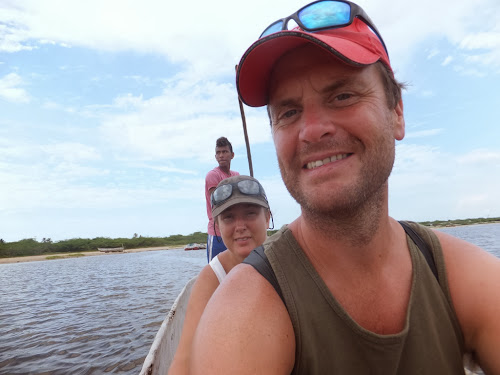 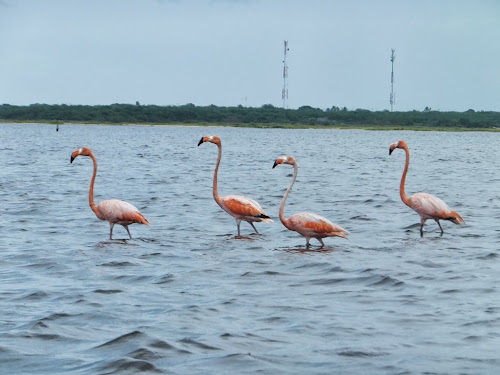 Flamingoes! Stupid birds me thinks.
Whilst we were there we also met some local fishermen back with their fresh catches. I do like a well cooked fresh fish but it always makes me a little sad to see them like this. They also had some lobsters which were very much still alive and they encouraged us to pick them up for a closer look. 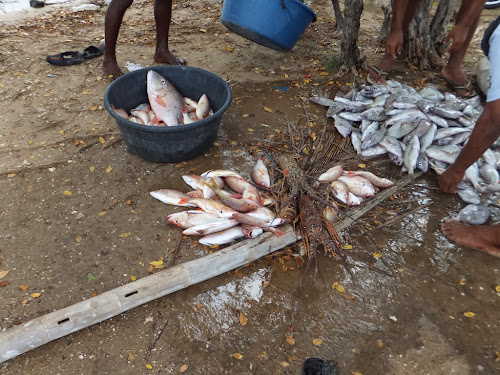 Local catch being weighed and shared out 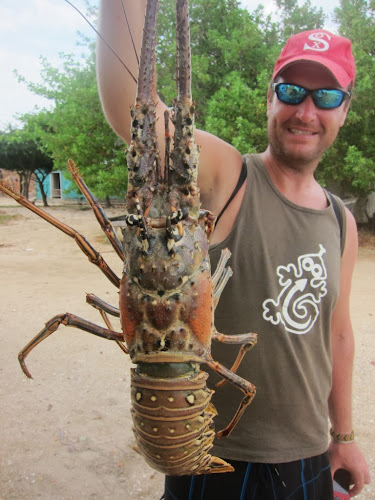 Clam exterior but inside I’m screaming like a little girl

We made it backs to Riohache without many further excitement and as mentioned we decided it to go further east but to head back to Taganga (a small village just outside the city of Santa Marta and on the edge of Tyrona National Park) with the aim of launching south from there. Which we did, but not until we spent another two weeks on the coast 😉

Next blog; Taganga, Tyrona, the mountain and the shits.