I’ve been slack. I apologise. I’ve been lazy and not written an update for two whole months.

How have you coped? Are you OK? I promise (with fingers crossed behind my screen) to write more often. I also promise to write full updates on the weeks between September and now (December 10th) at some point soon, HOWEVER, here is a brief summary of what’s happened in the 10 weeks since my last update.

The very brief summary; seen tons of Colombia, lost passport, got into argument with British Government, took a river boat down the Amazon into Peru, trekked to the ancient and massive fortress of Kuélap, got wet, got dry, got drunk.

Taganga is a small coastal village just outside Santa Marta on the Caribbean Coast. It’s small, gets packed at the weekends and can be VERY loud. It’s also on the edge of Tyrona National Park which is BEAUTIFUL.

We went for a 2 day hike and mountain bike ride. Day one to hike up the mountain; our guide couldn’t find the right path so we retreated to the road and walked up it for 13k. Not much fun. Day two; our guide promptly got lost going down the mountain resulting in a EIGHT HOUR slog through unbroken mountain forests and ended up back where we started and we had to stay on the mountain for an additional day. Day three we walked back down the road and picked up our bikes half way down for a fun (at last, some FUN!) mountain biking. I got three punctures and alas our guide forgot where we were supposed to be collected and we ended up abandoning the bikes with some locals and getting a taxi back.

We then spent a couple of fantastic nights sleeping in hammocks on the beach in Tyrona National Park (see picture above). The 40 minute boat ride into the park along the coast was beautiful, the 3 hour hike out was soured somewhat by Kate being attacked by the shits. Luckily my body held out till we got back to the hostel but then I too succumbed. Beware locals selling coconut ice lollies. We left the coast heading South still suffering which made the 16 hour bus journey to Medellin ‘interesting’.

Medellin and the West Coast

Luckily neither of us shit ourselves on the journey to Medellin but we were not feeling sprightly when we got there. Medellin is a lovely city with a history of violence surrounding the infamous drugs baron Pablo Escobar, but is now a vibrant modern(ish) city. We got stuck up a mountain in a cable car with a near hysterical Colombian woman and her embarrassed (but very supportive) boyfriend. To be fair to her, we were in the steepest section when we got stuck and for an hour they were reversing us up and down with gut wrenching jerkiness. There was also a thunderstorm approaching. Still, we made it down alive.

We didn’t stay in town long though as we flew to the a West Coast to El Valle to go whale watching and get some more beach time in. 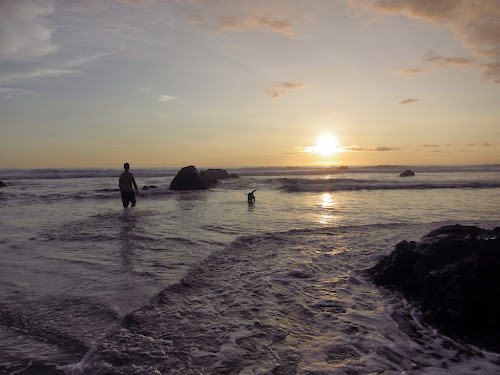 Sunset at the a Humpback Turtle

We stayed at a place called The Humpback Turtle for a week, met some some cool friends, saw a whale, played frisbee, fell in love with a couple of cool Labradors and cured our stomach issues. I also got a rash on my hand that blistered and 10 weeks later is just healing. Bummer. We also drank a fair bit of rum.

Back to Medellin and onto Solento

Returning to Medellin somewhat healthier we skipped straight through and headed south to Solento in the zona caffeteria (central coffee growing region). We arrived (accidentally) in time to see a festival in the nearby city of Amenia which seemed to involve every ‘Willy Jeep’ for miles around which was pretty awesome. We also caught another Colombian football game and celebrated late into the night when they clawed back from being 3-0 down to draw the game and qualify for the 2014 Worldcup. Not that we cared, but it was fun! We toured coffee farms, learnt about making a good coffee and met a Spanish chap (called Jesus) who used to work in London (in I.T) but now runs a cool Italian restaurant that serves AWESOME curries. Go figure.

Upon arriving in Bogota I promptly left my hand luggage in the the taxi from the bus terminal. It was 8pm, dark, wet, I was tired (and in a bad mood) and we’d been travelling all day. A 60 second lapse in concentration meant I lost my passport, debit card, iPad, camera, kindle and about £250 in mixed currency cash.

Excuse me whilst I scream FECK!!!!

What an idiot. Feel free to agree. We had planned to leave Colombia after Bogota but instead decided to stay for another three weeks whilst I tried to get replacement documents. We stayed in Bogota a week, did the bike tour, met a great Welsh chap (yes, Alex, that’s you), and saw some sights. The Botero museum ROCKS.

On Alex’s suggestion our next stop was Villa de Leyva which is a town that was classed as a national monument in the 50’s and has not been developed since. It’s beautiful. We dined on great food, did tons of horse riding (I can now offically canter proficiently without screaming) and I did some hiking. There may have been some wine and rum drinking too. We stayed 10 days which us the longest we’ve stayed anywhere. 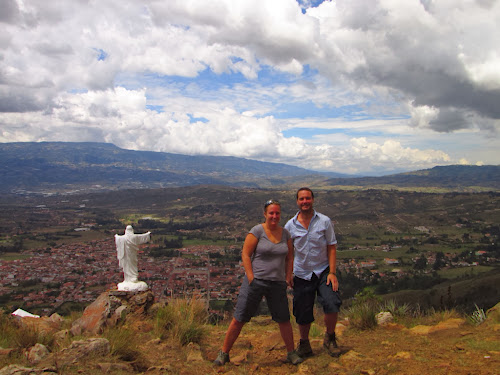 At the mirador above Villa De Leyva

Something like 70% of all of Colombia’s onions are grown here and we saw fields of them. The surrounding country side hosts several adorable little towns which we spent a couple of days visting. Talk about slow paced life – this lot are glacial. There is some good hiking into a national park here but we decided not to do it because we still had places to go and only another week until all my docs arrived back in Bogota. 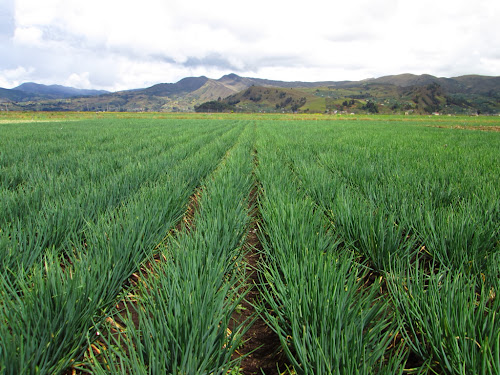 San Gill is the adventure capital of Colombia and next door is the beautiful little village of Barichara which rivals Villa de Leyva for most beautiful village in the country. We did a mountain bike tour out of San Gill into the Chichamocha Canyon with scary downhills and very hard up hills. We stayed in Barichara and did more horse riding along the top of the aforementioned canyon giving absolutely stunning views. Kate had some soup with a chicken foot in. Some girls are just lucky like that. 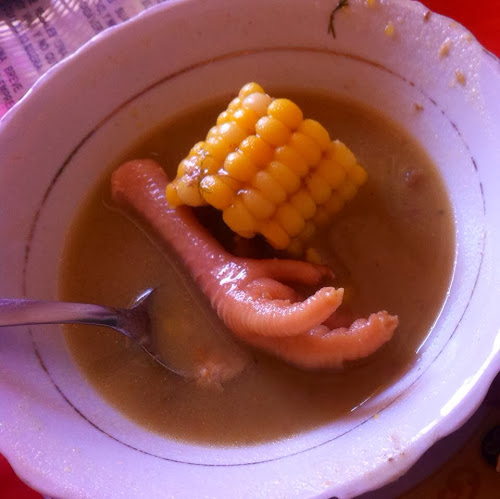 A foot. Not eaten. 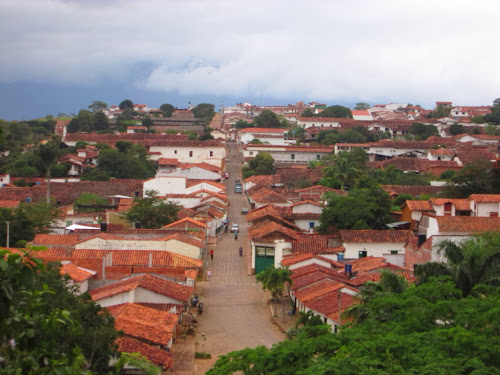 The picturesque town of Barichara

Back to Bogota and onto the Amazon

Having amused ourselves for three weeks we arrive back to Bogota to find out that both HSBC (‘the world’s global bank’) and The British Govement are USELESS WANKERS. My debit card had not arrived (sent normal post instead of courier as requested) and my passport hadn’t even been issued because of some bullshit reason and the need for colour photocopies of various documents I don’t have to be posted to them for them to be able to issue me a passport abroad.

I end up getting all documents sent to my mother who will forward to me. It’s seems my retired mother is more capable of arranging an international courier than either if these HUGE establishments.

Rant over. Thanks mum!

So, to allow us to continue, I get an emergency passport issued by the British Embassy in Bogota (who have no qualms about who I am) and we fly into the Amazon to take a river boat to Peru.

Leticia is a Colombian town deep in the Amazon and sits of the tri-border of Colombia, Peru and Brazil. We amuse ourselves for a couple of days hopping between countries (breakfast in Colombia, lunch in Peru, dinner in Brazil) and then we take a 3 night and 2 day trip down the River Amazon into Peru. Leaving at 19:30 on Friday night we arrive around 03:00 on Monday morning. Before leaving Kate tries to kidnap a week old kitten from our hostel. Bad Kate. 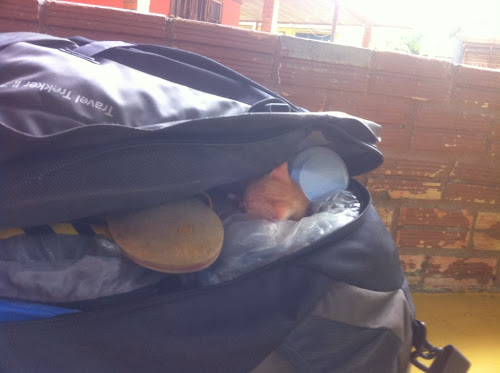 We arrive in Iquitos with aching backs but very relaxed after a peaceful cruise. Apparently there is a limit to how long you can lay in a hammock and for me about 2.5 days is it. 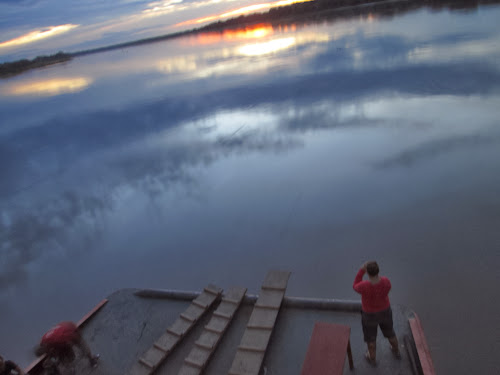 Iquitos is hot. It’s the largest city in the world that isn’t reachable by road. You have to fly in or take a boat. We stayed for a few days and went to Belén market where you can see pretty much anything that once lived in the area cut up and on sale, including (but not limited to); cows, pigs, goats, jungle rats, turtles, caimans, snails, widegy grubs, and billions of fish. Some alive, albeit not for long. Kate has a million gruesome pictures (and I have a few). It’s worth noting they sell other stuff there too, but mainly dead things. We met a really nice local chap called Jorge, who works as a guide in the market and with him explored a little of Belén village, which is made prodominently of floating houses as in the rainy season the whole village area completely floods. Even those houses concrete houses on the edge of the main town are half submerged for a few months of year. It’s crazy! We arrived just before the main rainy season so although water levels were rising most of the houses where resting on the mud. We also went to an animal sanctuary and met some wonderful monkeys – these are not for comsumption. 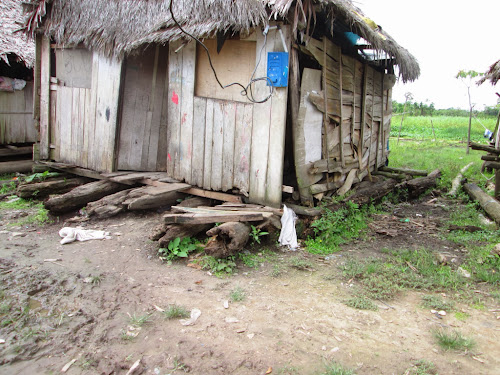 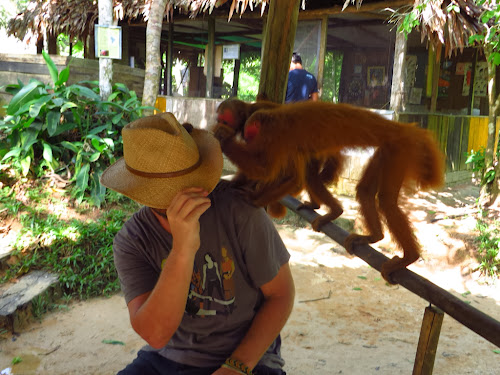 We flew from Iquitos to Tarapoto which is on the edge of the Amazon Jungle in Northern Peru. We only stayed a night but I wish we had stayed more as the town seemed cool and the owner of the hostel we stayed in was a lovely old woman who greeted us very warmly. She also put on possibly the most civilised breakfast any hostel has provided us in all our travels.

The next stop was Chacapoyas which is a town I visited in 2006 when I came to Peru to do the Inca Trail. From there we trekked to the third tallest waterfalls in the world (Gocta) on one day and then did a 4 day trek taking in lots of pre-Inca ruins and visited Kuélap – a massive fortress that is truly spectacular. We got wet, cold and muddy, rode donkeys over mountains and trekked down paths turned to rivers by the rain. We ate more fried food than I care to think about and ended up quite tired and in need of some R&R. But first a 10 hour coach ride to Cajamarca with some stunning views of the mountains and deep valleys of the Northern Andes. 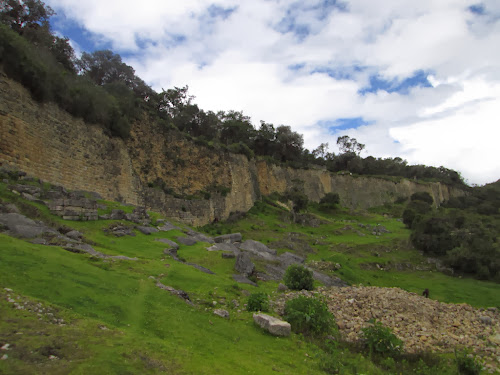 The massive walls of Kuélap. 22 meter high at its tallest point 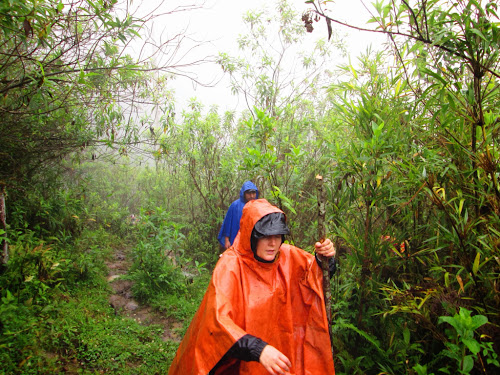 And Cajamarca is where we are now. Admin days; recovering and enjoying warm showers. Most importantly washing some *very* dirty and smelly clothes. Catching up on events; very sad to hear about Mandela.

Next stop? Probably Trujillo and the beach for a day or two then onto Huaraz in the mountains before heading to Lima to pick up my passport – thanks again mum!!

We hoped to be in Cusco for Christmas but we’ne just been invited to join Steve and Charrlotte (friends we met at the Humpback Turtle) in Bolivia, so we are now looking at the logistics of that. That’s on my list of things to do tomorrow but TONIGHT, right now, it’s rum O’clock and time to watch episode 2 of series 3 of LUTHER. 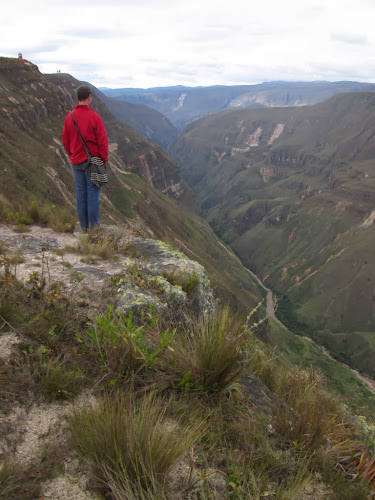 A canyon at Huancas, just outside Chacapoyas. I didn’t jump