Crossing the border from Honduras proved pretty painless apart from the customs charges (about £8 in total) but made more difficult by them only excepting local currency and I had already changed my cash. Lesson learnt there – wait until you are in country before cashing in. Once through we caught a bus to Ocotal where we changed for another bus to Estelí – our initial destination in Nicaragua.

We arrived without reservations. It’s off season, who needs them? Well, something was going on in Estelí as we got turned away from the first two hostels we tried and ended up in our third choice, Hotel Miraflor, which was a little seedy but very central and clean. The only (main) oddness was there was no window or fan in the shower so the room had a constant damp smell.

Estelí is a working city and the work is farming. Be it coffee, maise or tobacco. There were a couple of different co-operative villages in the area we could investigate and initially we chose Tisey (mainly because they produced goats cheese which we were keen to try) but as it turned out there were no buses (at all) to Tisey on the day we wanted to go. Not wanting to waste a day we were easily talked into visiting Miraflor by Janie.

Janie is an English Lady who had settled in the area after starting work here about 15 years ago and now has a Nicaraguan family and runs a not-for-profit eco tourism organisation. As well as running Hostel Lunar (our first choice) they run a cool cafe and also tourism centre (spread out over 3 corners of a cross roads) in the city from which they arranges home stays in local communities and help foreign student get teaching placements. She also recently started a community library bus which travels around lending books to kids who would otherwise not have any access to them at all. After our chat with Janie our planned day/night in the community had turned into three nights!

Our plan was to arrive in the Miraflor community of Sontule around 4pm and stay with Donna Lucia and her Husband Don Rogelio on their working farm called ‘Illusion Farm’. We booked a guide for the next day to take us around the community and to show us the coffee plantations and coffee processing centre (though as not the right season there was nothing going on but the coffee slowly growing). We also got stuck into farm life and fed the chickens (which was surprising good fun), Kate learned to milk a cow and I got to chop some wood with a very big axe (which was actually quite scary!) and we herded cows – easier than I’d imagined. 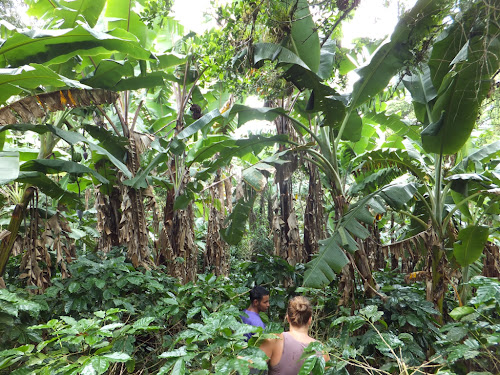 Wandering through the coffee – it grows better in shade so they plant it under banana trees.

A ‘lookout point’ overlooking part of Miraflor – Kate and our guide. 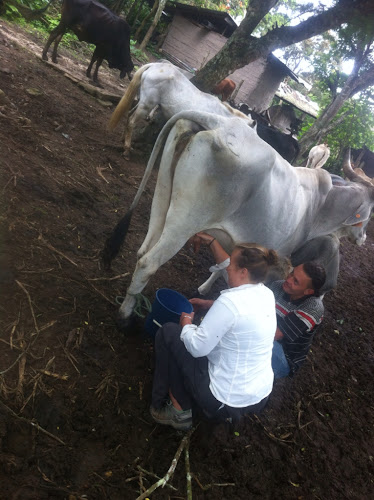 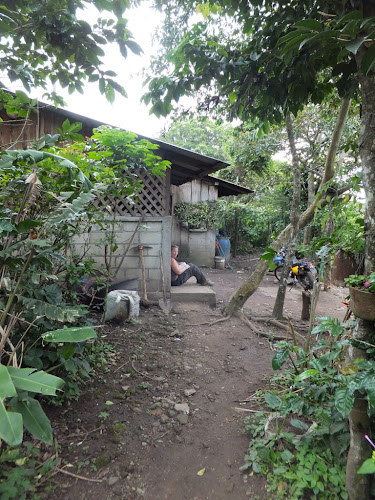 Taking a break outside the farmhouse. 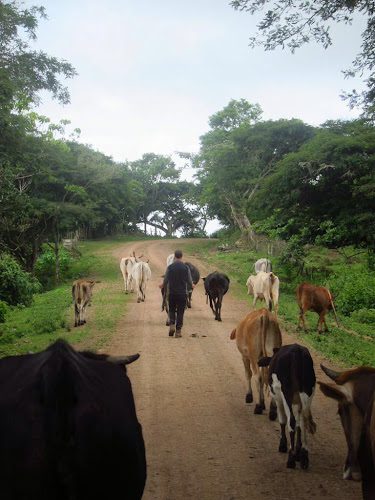 We packed quite a lot into that one day! The next day we said our fond farewells to our hosts and their family (Their sons Jackson and Marlon, and their granddaughter Anna Lucia get special mentions!). We had booked another guide to arrive with horses to take us to the next community we were staying in; La Labranza. This was to be a 4 hour ride. Easy! Oh, how wrong I was. It turns out that two hours is about the bearable limit for me to sit on a horse. Add to that we were wearing our travel bags (our main bags we left in Estelí) which had 4 days of clothes in and seemed to weigh a ton then both shoulders and bum started to ache quite quickly! The ride ended up taking about 5 hours, the last of which I could have (and possibly did) cried through. 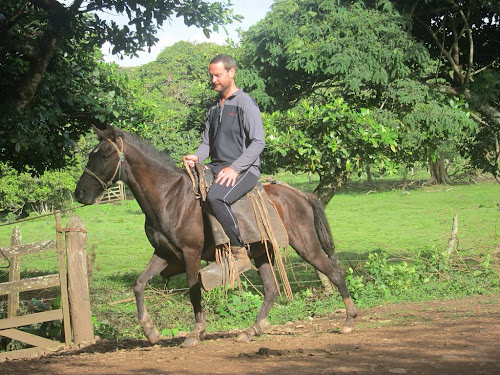 Me at the start of the ride ‘testing things out’. No finish photo available. Note; no hat.

La Labranza was a smaller comminuty than Sontule, but it was more closely packed together giving it a larger feel. Our hosts here were señor Orlando and señora Deyanira, their two daughters and a younger son, Jaun. We arrived at lunch time and decided that in the afternoon we would go for a walk to try and shake loose our legs, bums and shoulders from our morning exertions. We ended up going for quite a long walk towards a local lookout point which, as they are prone to be, was at the top of a hill. Kate decided to stop and relax about two thirds of the way up but I ploughed on and was rewarded with a fantastic view of another part of Miraflor. It’s amazing that a green valley can look quite as lush, as green, as fresh, as this one did. Perhaps I was just feeling sentimental but it was really beautiful – alas I didn’t have my phone or my camera on me! We returned to the farm where a we had a much needed shower (our first in Miraflor) and then prepared for dinner. Dinner was lovely and as is the farming way life we were to bed early after the sun went down.

It’s worth noting here that all electricity in Miraflor is supplied by solar power and not all houses have that. Lights in both farms were only in the main living area/kitchen and the guest rooms. We didn’t have power in our rooms though – just a light. The farm in La Labranza had a small black and white TV which was on for about an hour a day so their young son could get his fix of trashy Latin American soaps but other than that electricity didn’t play a big part of farm life. All cooking was done on wood burning clay ovens and little or no light was on if not required – candles were not everywhere and darkness generally ruled!

The next morning we had breakfast and arranged to go for a walk around the comminuty with Orlando. He had some work to do first and set to work in his field across from the house whilst we lounged in hammocks and let breakfast go down. Still feeling stiff from the ride the day before I decided helping might help loosen up so I went over and offered. Fuck! Ploughing is hard god damn work! 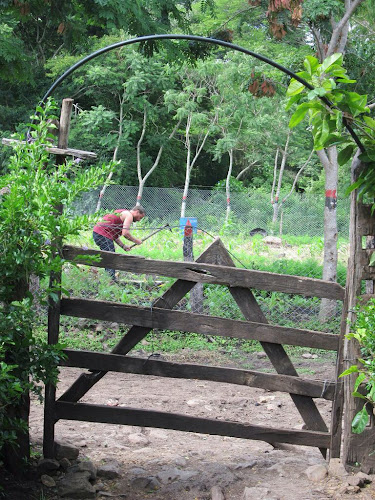 Orlando manually ploughs one lane a day – about 30 meters. I helped do about 10 and was shattered!

The ploughing done, we walked through the surrounding fields and he explained what the community grew; mainly salad vegetables, potatoes, maise and some coffee. We walked out to yet another local look out point which was just as lovely (but not quite as grand) as the one the day before. On our way back to the farm for lunch after which we were due to take the bus back to Estelí Kate and I decided to ask to stay another day – it really was very beautiful out here. “No problemo” was the answer and so we were set. I was coming down with a bit of a headache so asked our hosts if they had any suitable tablets (as both kate and i were out of nurofen) and they did. Awesome! We had lunch and I retired to a hammock to nurse my head. Kate took the opportunity to revise some Spanish. During the afternoon some other tourists arrived (a young Dutch lady and her mother) and that night we all dined together. My headache was still persisting so I asked for a couple more tablets which were duly given and taken. Oh how I regretted this decision later. However, at the time all was groovy. Our hosts fed us and then Orlando got out his guitar and with one of his daughters sang some wonderful Nicaraguan songs. It was a lovely evening – headache and all.

The night I died. So that night after we went to bed I had one of the worse nights of my life. More on that perhaps in another post at another time. Surfice to say after a couple of hours sleep I awoke with a fever which lead to very dark and depressing lucid day dreams (I didn’t sleep again that night) in which I died. Again and again and again. Perhaps a little sun stroke? Perhaps an overdose of the 500mg tablets I had so happily taken in abundance. Perhaps a bit of this. Who knows. All I can say is that it was a dark and long night.

The morning came, as it does, and I had agreed to help Orlando to milk the cows. Seeing as Kate had learnt at the previous farm I was keen to give it a go. Or at least, I had been the day before. Orlando found me sitting at the outdoor table just before 6AM and asked in his very cheery way if I was ready. “Si” I found myself uttering. So we milked! It was actually good fun even if I was feeling sorry for myself and I milked away for a good minute before handing the duty back to Orlando who was mightily quick at the task. Kate had slept through my getting ready for this so no photo evidence is available – but I did do it! honest!

We returned to the farm with around 30 litres of milk from 4 cows which is surprising heavy. I skipped breakfast and retreated to a hammock full of self pity. Kate went out with Orlando for a couple of hours on horses for a trip to the a local waterfall which was apparently very nice. After a few hours of sleep in the hammock lunch time was upon us and I was famished and set to eating everything, after which we had to walk down through the village to the main road where the bus would pass. We went with the Dutch couple who only stayed at the farm the one night and as Kate was running late with packing, I walked with the Dutch couple and Kate caught us up on horse back! Waiting for the bus, still not feeling great, Kate made me a temporary hat to help keep the sun off me. 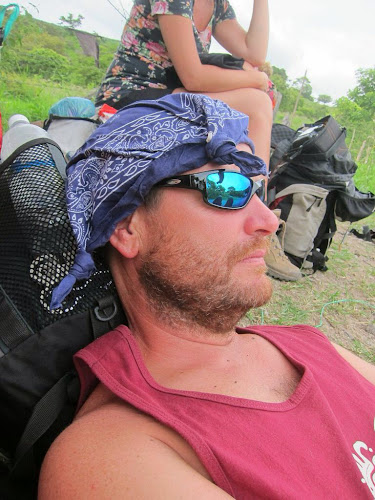 Waiting for the bus – feeling sorry for myself – thankful for the stupid hanky hat.

The bus when it arrived was packed (situation normal for a chicken bus) so Kate and the younger Dutch lady decided to join some of the locals on the roof of the bus for the 90 minute ride. I kept the mother company thinking it would be nicer inside – again I was wrong! 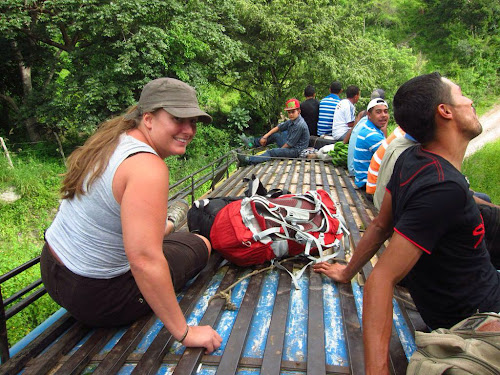 Kate enjoying the ride. I, was not

We arrived back in Estelí where we stayed at Hostel Lunar for two nights whilst I recovered a little more and we washed all our clothes of farm type odours. We also purchased some ibuprofen from a chemist – which here comes in 600 or 800mg tablets. They dont mess with drugs here 😉 I also got a new hat! Almost as important as the drugs.

Our next stop is León, a city near the pacific coast where’re the temperature is always around 30’C and from there we head to the coast for some beach action. More of that soon!