Lake Yajoa and The D&D

We arrived at the north end of Lake Yajoa (though lake not in sight) around 3pm, having left Utila on the 06:20 ferry and then taken a bus from La Cieba to San Pedro Sula and having jumped straight onto another bus (ok, we had a hour break for lunch and some emergency shopping – I needed new headphones have most mine). This second bus was heading for El Mochito and according to our guide book would pass by our destination though due to some confusion with another passenger trying to give helpful advice we had a fearful 20 minutes whilst he claimed we should have got off but the conductor reackoned we were Ok. Turns out the conductor was right and he let us off as promised by the road to the D&D.

We had about a 300 meter walk to the hostel and upon arrival and checking in Kate and I set about immediate objectives. Kate; shower. Me; check out the beers and start sampling.

The D&D is a Eco lodge come Micro brewery and offered a range of fruit beers and long with an amber, pale, golden and porter ales. Not cheap by travelling standards (about a quid for a half) but still reasonable for what turned out to be be, very nice beers. 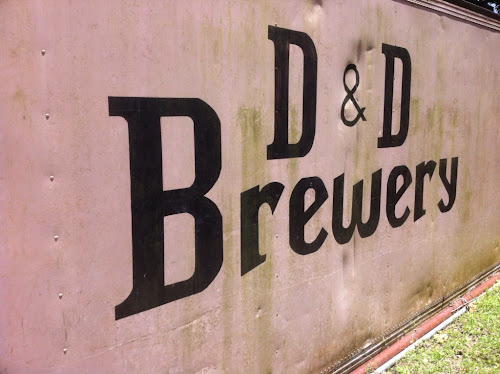 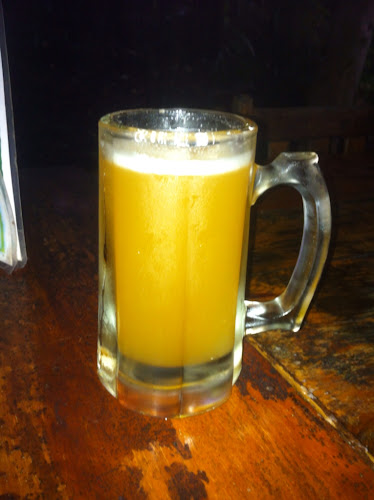 The D&D and my first (or second or third) beer

Not wanting to waste the afternoon I pulled myself away from the bar and went and showered and refreshed. We then decided to just relax for the rest of the day so I then returned to the bar 🙂

The next day, after a leisurely breakfast we went for a wander to find the lake. This turned out to be about a 40 minute stroll along the canal and then the last few hundred meters to the lake shore was clambering along the river bank and over marsh/reed land. It gave us a fantastic view of the top of the lake and was a very tranquil spot where locals come to fish in various ways; from families with lines on the shore, to small boats with nets, or one chap snorkelling with a spear gun. 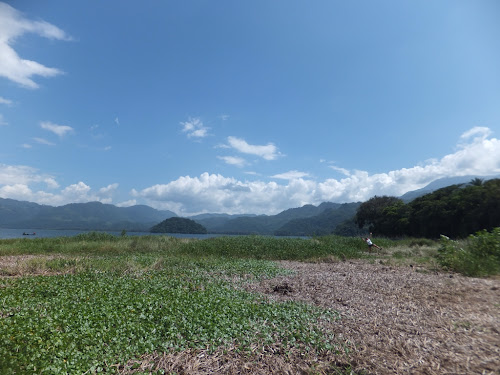 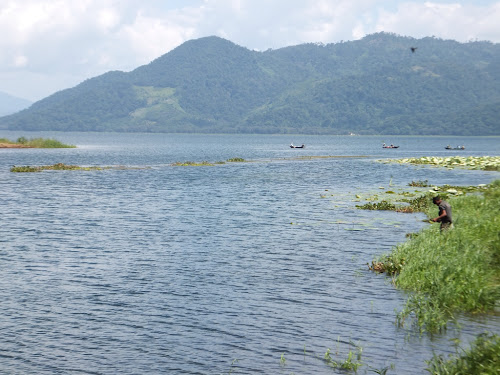 Palhapanzak falls. The next day we set out to explore a local falls. Famed to be 40 meters high and well worth the trip we jumped on a local bus asking for ‘el cascade’ as we couldn’t pronounce the name of the falls. It took us about 30 mins to get there and cost about 50p for the ride. We then had a half hour walk into the park entrance and the falls. All TOTALLY WORTH IT. We had set out with the idea of just looking and perhaps getting our feet wet in the river at the bottom, but the park was more developed than we had thought and they offered tours behind the falls for just H$130 (about £4). We watched a group of Americans emerge, all totally soaked, all hooting and hollering that it was AWESOME and we took the plunge!

There was only us in our group which was cool and it was indeed amazing – even a little scary – as they lead you to the base of the falls, through the curtain of water and into a tiny cave behind. The water of a 40 meter drop is blooming powerful and the spray makes it hard to see, and breathe! I really wish I had a waterproof camera as some cools shots were to be had! From the entrance of walk in I took this shot; you can see how the spray was hitting us from all this way away! 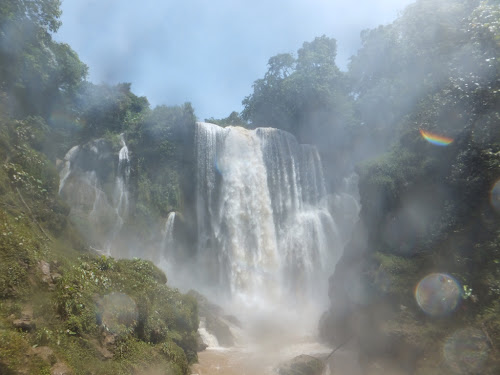 We were enjoying our stay at the D&D so much we extended it for a day and hired the local bird watching expert, Malcom, to take us on a tour of the local ecological/archollogical sanctuary which bordered the lake from the otherside of the canal we had already walked along. We started at 06:00 and got back around 13:00 – and all for H$500 for us both! (About £15). I must admit that by about half way round I had given up showing any interest in the birds he was pointing out but it was a lovely stroll! We also saw some Lenca ruins – the regional accient tribe of Mayan times (but not Mayan). The ruins were protected but not well excavated or explored, indeed due to lack of funding for research apparently not much is known of the Lenca – or so our guide said. All in all a nice day out. 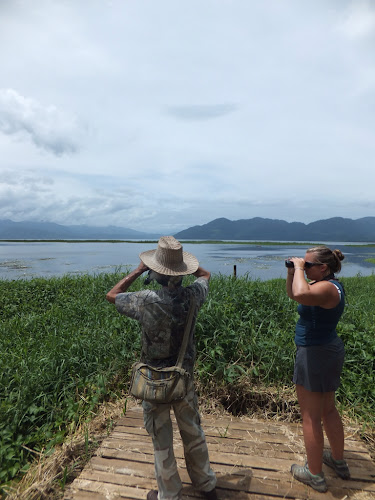 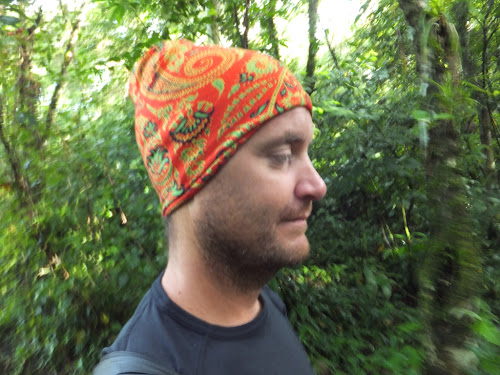 Drastic action required to fend off the mosquito swarms taking an interest in my forehead and ears!

We set off south, heading towards Nicaragua with the intention of doing a night stop over somewhere near Tegucigalpa, Honduras’s capital, to see just a little more of Honduran life before leaving. The guide books slate the Capital so we opted for a small village just in the mountains outside it called Santa Lucia which apparently had a couple of hostels and was close to ‘Valle de Angeles’ which is a slightly more touristic town that Sanata Lucia but is supposed to be equally pretty. It took us about 4 hours to get to Tegucigalpa (2 busses) and then another 90 minutes to get to Sanata Lucia (taxi in town to different ‘terminal’ then another bus to the village).

We arrived about 4pm, all bags in hand with no hostel booked and no map of town – we simply needed to look around. It’s turns out its a very small town and a first glance we couldn’t see any signs of hostels. We knew from the guide book that there was one about 1km out of town so with no other options showing we started walking. . . Her were just on the edge of town we came across a sign for ‘Villa Pine Forrest’ and with nothing to lose we followed the sign off the road to check it out. WHAT AN AWESOME B&B. slightly more expensive than our budget usually runs to (us$50 a night) but run by a really lovely couple (Shabbir and his wife) and its was just a stunning house. And it turned it that Shabbir was a fantastic chief and cooked an awesome breakfast! (Included in price) We ended up staying 3 nights whislt we explored around. 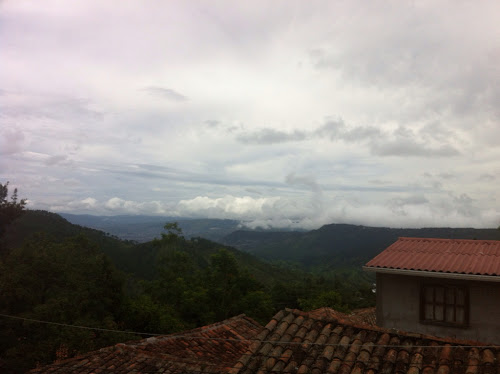 The view out from Santa Lucia
Our first day there we caught a bus to neighbouring Valle de Angeles to look around. It’s a lovely little town but very touristic centred with its Main Street full of tat shops and local craft shops. We explored out a little into the community and was surprised to see a pretty modern standard of living in evidence – with new style brick development. Obviously the town has had some good investment. I also took the opportunity to get my hair cut – which was long overdue. 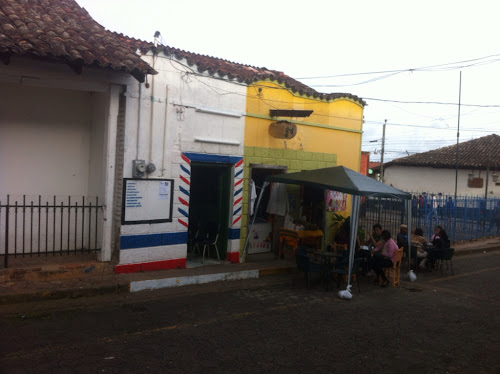 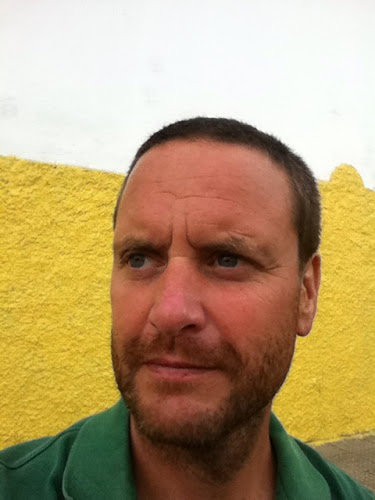 Our second day we went down into the city to explore TEGUCIGALPA. With warnings from our hostel to be sensible and also armed with a map and some directions if where NOT to go we set off. It actually turned out to be quite nice. We wandered around and saw some sights and never saw or felt threatened directly. We did come across a large pool of blood and a blood trail leading away from it (something happened here!) but never actually saw anything untoward. We even stumbled across the national theatre which had a jazz troupe performing for free in the bar area and we stopped to appreciate this for an hour or so. 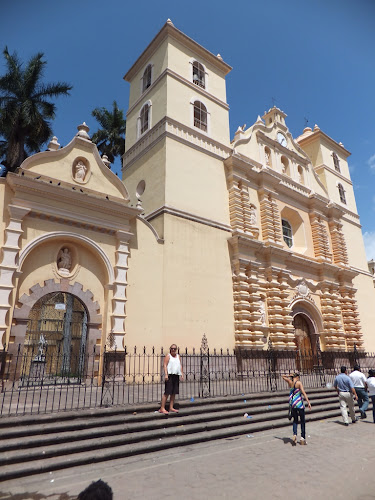 Kate on the Cathederal steps 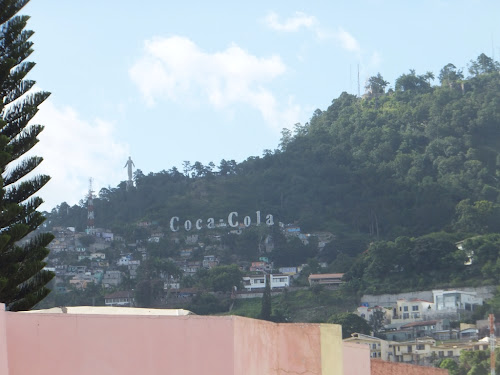 I don’t doubt that the city has its lows, like any city, but we fund Tegucigalpa to be OK. Though somewhat lacking in bars and restaurants.

Having spent three days in Santa Lucia we decided it was time to head on. Time for NICARAGUA! Our wonderful host, Shabbir, gave us a lift to the bus terminal in the city and from there we caught an express bus to Danli, which is about halfway to the border, and from there a chicken bus to Los Manos which is the border town. By about 2pm we had left Honduras and started our next step. 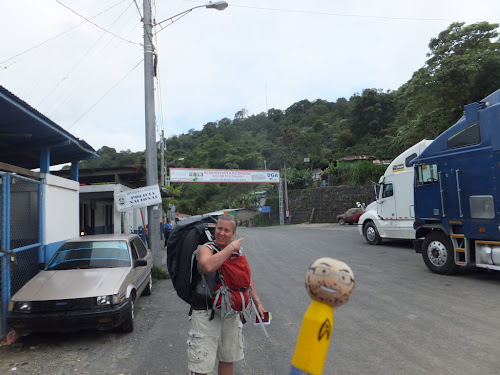 Next up; Esteli and Miraflor – the farming cooperatives