Getting to Utila
Our first stop in Honduras was San Pedro Sulu and it took us around 5 hours to get there. From there we took another bus to La Ceiba way out on the east coast. Neither place gets a good write up in the lonely planet and as neither was on our hit list we didn’t spend any time there. We didnt arrive at La Ceiba until around 22:00 after our second 5 hour trip of the day and so checked into a cheap hostel;Banana Republic.  This place gets slatted in online reviews but as it was only one night, and it was pretty much the only cheap option, we decided to chance it. Let’s just say I’ve stayed at worse.

Our ferry to Utila actually left at 09:30, but our taxi driver in the evening told us 07:30 so we arranged a pick up at 07:00. Imagine our dismay at arriving 2 hours early for no reason at all. Bummer. HOWEVER, A tiny shop-come cafe had a TV outside with some chairs and Andy Murray had just started his Wimbledon finals match. AWESOME! We sat and watch up to 6-5 in the second set before we had to pull ourselves away. This was a good start to the day after all 🙂

The ferry to Utila took just under an hour and we dropped our bags at one of the dive shops (who kindly look after them whilst we checked out their competitors) and we went shopping for dive packages and accommodation. After checking a few out we went with Bay Island College of Diving, mainly because they looked quite professional, had a nice dock, and nice bright and clean rooms. There was also a bar on the dock that was NOT near our room – an added bonus on both counts! 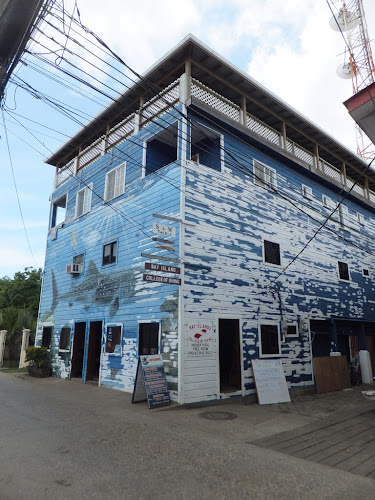 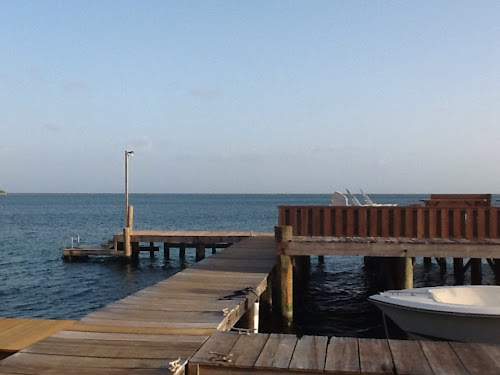 The Diving
We booked ourselves in for a week, with each of us doing 10 dives – the diving cost US$280 and accommodation would be free. That would be 2 dives a day for 5 days and a couple of days off to relax in between. We were supposed to pay for accommodation on the days we didn’t dive but at the end of the week (we stayed 8 nights) they didn’t charge us for it and we didn’t complain!
We didn’t dive the first day – instead we slept in and explored the island a little. Which is to say we went for a stroll, had lunch and then relaxed on the dock.
The next five days were all about diving. The boat left at 08:00 which isn’t too bad but thre was no food onward so if you wanted breakfast you needed to be up earlier. The first couple of days was diving on the south side of the island and whilst it was ‘OK’ they were shallow dives at fairly boring dive sites. It became apparent the boat was catering the the least experienced on board – which meant the learners! We complained after the first day, and asked them about diving the north side (which had a steeper and deeper wall and was supposed to b much better all round) but we only got vague responses about bring Esther dependant blah blah blah. Our concerns became more vocal on day two and so on day three we finally got a decent dive – still on the south side – but a wreck at 30 meters. We liked that 🙂 Then things changed for the better and for the last two days we went to the north side both days. Diving there is indeed much better and we saw a lot more of everything! Lobsters, Coral Shrimp, Moral Eels (Spotted and Green), Lion Fish (which are an invasive specials here so are hunted by the dive schools), an overly friendly Nurse Shark, Baracuda, Eagle Rays, Arrow Crabs to name just some. No turtles, which is always a shame, but apparently we were just unlucky. 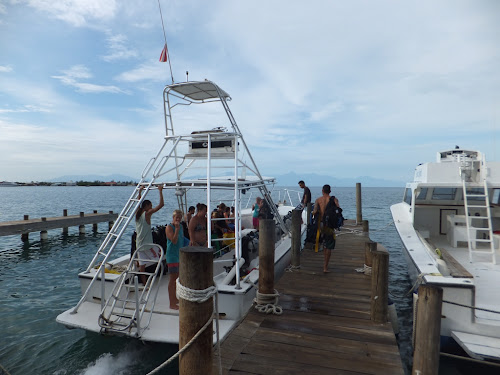 Our dive boat preparing to leave 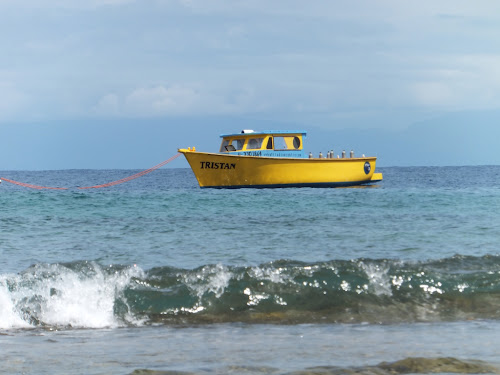 The Island
Utila isn’t particularly big, it has one main road that runs along the southern coast and a couple of smaller of roads off that. By road I mean motorised walkways as although we didn’t see any cars there hundreds of motorbikes and quadbikes tearing around – none of which whom really wanted give way to people on foot! 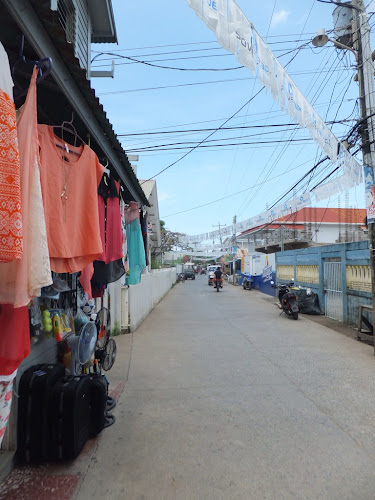 A quiet moment in the street
There are some pretty cool bars along the Main Street and if your thing is getting plastered every night you can certainly accomplish that fairly easily! One of the best bars was Tranquila which had a special offer each night. We enjoyed 2-4-1 rum night but passed on tequila shots for 10 lempira (about 30p)buts whole lotta people didn’t!
The food was a little bit of a disappointment. Lacking fruit and seriously lacking good sea food for an island, it was lots of burgers, fries and plastic cheese. That said there were a couple of decent places but they only opened a couple of times a week, and on the same nights as each other! This caused some pain on the night they weren’t open and some serious decisions on the nights they were! My favourite was R.J’s which was the only seafood specialist and they only did steaks with set side dishes. We found a really cool bar on our last night on the island called Tree Tonic which was really cool. Again only open a couple nights of the week! I guess that’s just the problem of touring in ‘off’ season. If you ever go to Utila I thoroughly recommend you visit this bar!
We spent a day walking around and on the est side of the island we did some beach combing and both played arou death macro photos on our cameras shooting the various stone formstiond snd flotsam that had washed up. This was my favourite; 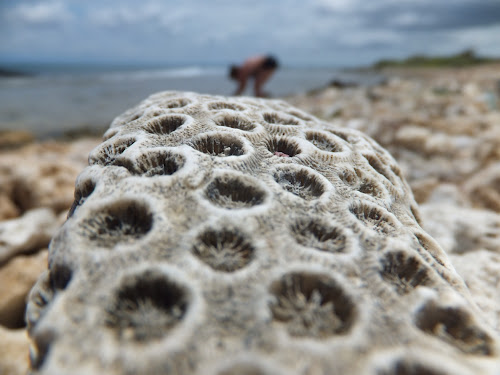 My picture of a stone, with Kate taking her pictures in the background.
Leaving Utila and the loss of hat 4
As some of you may know, I have an issue with losing hats and sun glasses. On our last day on the island I went shopping for a rash vest and after trying one on and buying it, I acciedntly left my hat (no.4, having previous lost hat no.5 and reverting to wearing this one) on the hangers next the rest! I didn’t realise this until we had left the island. Sad times. Oddly enough, at the same time as losing hat 4 and buying the rash vest, I also purchased pair of sun glasses No.5! Odd how things tie together isn’t it.
We left Utila on the morning ferry (06:20) and immediately caught a bus back to San Pedro Sula and from there we headed towards Lake Yojao where our trusty lonely planet informed me there was a brewery! We were set on stopping in a few more places in Honduras before heading towards Nicaragua even though the Lonley Planet seems to do its best to make Everywhere in Hondurus sound glum. I can assure you it is not!
Next blog; Lake Yajoa and the D&D, Tegucigalpa and Santa Lucia.