Having spent a week in San Pedro la Laguna during festival week we were looking for a quite, out-of-the-way place to rest for a few days and we found this at The Earth Lodge, a ‘retreat’ in the mountains over looking Antigua.

We had been recommend the Earth Lodge by a young lady we met in Belize and then had seen signs for it in Zephur Lodge at Sumec Champey so we knew it was going to be nice and it certainly lived up to that. We booked in for three nights, two full days, and arrived on Sunday for their weekly BBQ and a live music set (a local young lay with an acoustic guitar and love for covers) which was a lovey afternoon. 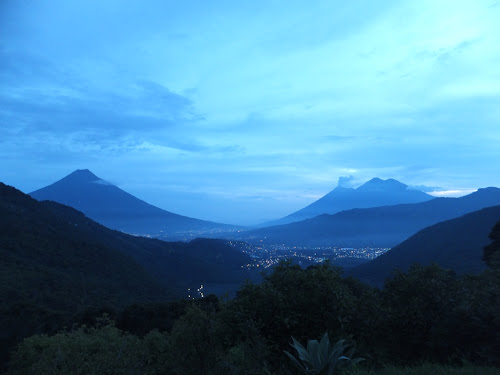 They have a yoga session everyday at 09:00 and Kate and I both went on our first day, and I went the second day to! In fact the only thing stopping me going the third day was our departure time (it was yoga or breakfast!). I like yoga. I’m no good at it, but I do try! And trying is was it’s all about. We had a great instructor from the USA (who also doubled as the evening cook!) who was patient with me whilst challenging anyone who wanted it. I certainly did not.

We didn’t do much else there, that was kind of the point, but it was great to spend the nights in our little cabin listening to the sounds of nature around us and the falling rain (it rains most nights – it’s the season for it) or to just relax in the lounge/bar with the above view. We went for walk in the local hills one afternoon but the clouds came in early and we had to turn back before getting to our destination (a local waterfall) as the storm struck.

The food was mainly vegetarian, but I can live with that, and the drinks were free flowing and delivered to you, which is nice :). We met some lovely people there, one of which is Joe, a young American from California out exploring Central America for a few months. We caught the shuttle from Earth Lodge back into Antigua with Joe as he was heading south to Nicaragua the same day we were setting off to Rio Dulce, but by the time we got to the bus station, he changed his mind and had decided to tag along with us in our chicken bus journey to Rio Dulce in the east of Guatemala.

Or trek to Rio Dulce started with a chicken bus to the Captial City; Guatemala (Guat). (FYI; chicken buses as just local buses where everyone crams on and lots of stuff is piled on the roof. Called chicken buses for the likelyhood there will be chickens on the bus somewhere!). As city’s go, Guat sucks. This was the second time I went through it and I didn’t enjoy either one, however we did stay longer this time than on my first visit and looked around a little. 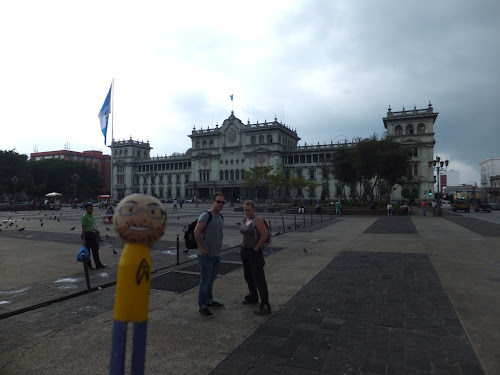 We wanted to get another Chicken bus to Rio Dulce but where told adimently by a couple of sources this was not possible and we needed to take a schedule bus (private bus company’s) which are a little more expensive, can have air con and generally have luggage compartments under the bus (instead of just strapping it to the roof). We found the company going to Rio Dulce, booked in and dropped off our bags and went out to find food and the Internet, with the later bing very hard to find. It would seem wifi, or bars, and especially bars with wifi have not yet made it to Gaut. After grub and minor tour of the city centre we spent about 40 minutes on our search for wifi before hitting a cyber cafe. I mean when was the last time you had to do that??? Cyber cafes, soooo 90’s.

Our bus left on time and amid a storm, but the temperature was still hot and what would you know, the air con didn’t work. As the windows didn’t open, lets just say it was an unpleasant 6 hours.

We arrived at Rio Dulce just after 10pm and had pre booke ourselves into a hostel called ‘Kangaroo’ (set up by an Aussie, obv!). They were out of town and directly on the river which sounded ace. They came and picked us up by boat from the dock and we arrived at the hostel just as the rains started and the power went out. They showed us our rooms, gave us a beer and a candle and left us to it and this was a perfect end to what had turned into a pretty horrid day of travelling.

Around Rio Dulce; We spent the next two days doing some exploring. Day one we went out to a HOT water waterfall, fed by a hot spring and falling into a cold, deep plunge pool. It was very odd to tread water in a cold pool whilst under such a hot current! There was also a jump you could do, I’d say about 4 meters, which Joe did without batting an eyelid (oh to be young, brave, courageous and used to diving/water jumps) and Kate decided to not even try. I, on the over hand, set myself up to jump and then wimped out and climbed back to safety. It was only that a local family was at the top and were looking on that made me give it a other go and after a coupe of minute of angst I managed to throw myself into the pool. Nothing to it really. No photos available. Alas. I may or may not have shat myself.

On the second day we took a boat down the infamously beautiful Rio Dulce River to Livingston, a rough and ready (so we were told) town on the coast of Guatemala that is only reachable by boat. As it happens, it was OK and we spent a few hours wandering around and having some drinks and a bite to eat before catching the boat back. 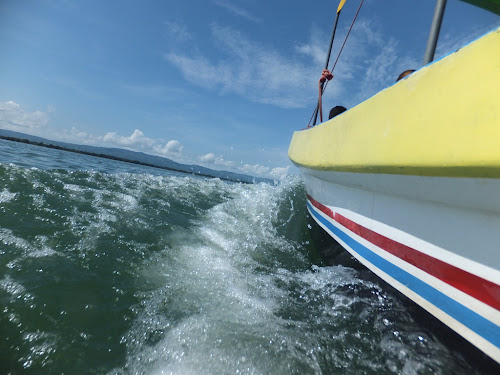 My try at ‘arty’ photo from the boat. 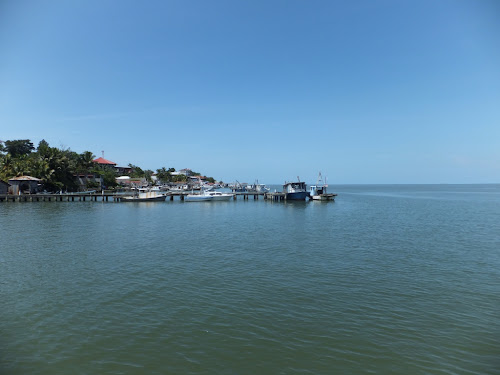 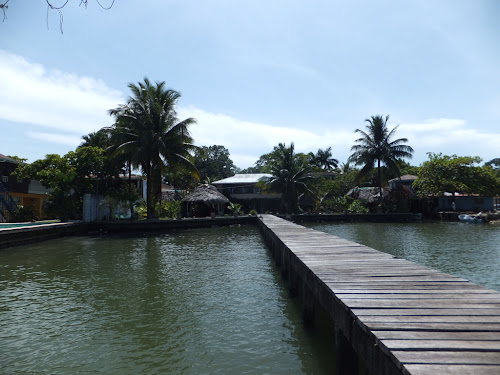 Where Kate and I stopped for a drink (Joe was having some ‘me’ time).

That day turned it to be the 4th July. Possibly the first 4th July where I’ve spent the day in the company of an American. Joe’s day.

The 5th July saw us leave Rio Dulce. Kate and I were heading to The Bay Islands in Honduras and Joe was starting his trek towards Nicaragua, heading first to Copan in Honduras which was not the same direction as us. We caught the boat from the hostel to Rio Dulce town together and said a fond farewell, with promises to reunite in Nicaragua in a couple of weeks. That’s only a week away now – Joe, where are you??? (I know, I know; the Corn islands!)

Kate and I caught a bus to towards San Pedro Sulu in Honduras, and after 3 lovely weeks in Guatemala had an un eventful boarder crossing and said hello to Honduras.

Our next stop was Utila, one of the Bay Islands, famous for its cheap diving. As I write we have just left there and I shall write up our diving adventures separately in another post.