There are few stories from along the way I have missed out (because I either forgot them at the time or be because I didn’t want the blogs to get to long), however as we having a few days at The Earth Lodge just outside Antigua, I thought it would be a good opportunity to go back and revisit them.

The Bag Project
Its stupid, a little old fashioned, but I love it. I have a canvas satchel which I aim to sew (or have sewn) onto it a flag from envy country I visit. On the way north from Arepgentina to Belize I managed to keep up with this until Peru.
But now we are heading south, I have restarted it! I’ll keep you posted with the progress. 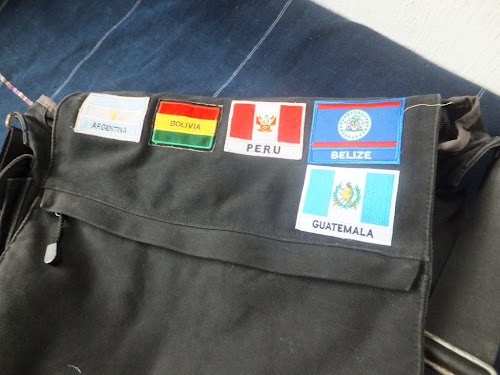 Cusco Parade
Whilst I was in Cusco back in May there was some kind of major festival in which the local schools formed part of the parade. It was great to see the central square shut to traffic and have so many people dressed in their traditional dress performaning dances and playing music. Here are a few pictures; 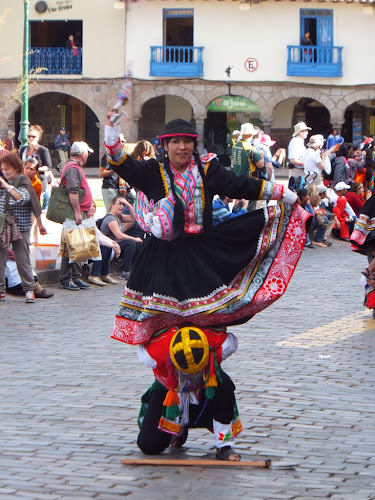 Apparently in Peru, this is how it’s done. 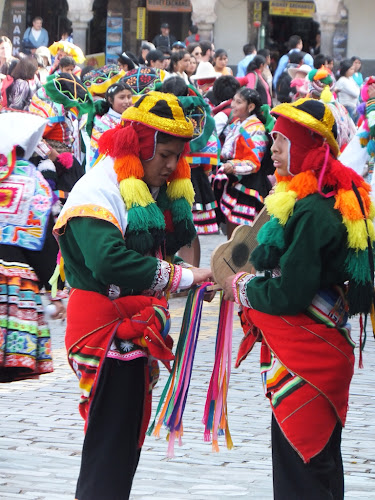 The lads pep talk each other. 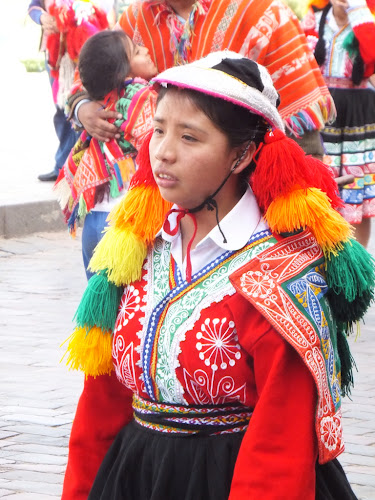 “Which one shall I stand on today” she wonders . . .
There must have been hundreds of kids dressed up for this – alas I didn’t get any decent photos of all of them! It was a great few hours watching them pass by.

Boat Games
On the boat from Colombia to Panamha the general night activity was card games. Specifically; card drinking games. The main game of choice was Presidents and Arseholes where the winner of each round (The President) gets to create a new rule for everyone to follow in subsequent rounds (which generally focus on making the loser (The Arsehole) look stupid or get drunk. As a rule I sat these out – I’m too old for that shite 😉 but I did play along one night. Another game played on our last night was A & B were one persons closes their eyes whilst another choose who in the group A and B are (which can include themselves or the person with their eyes closed) then the person with their eyes closed chooses something that A must do to B or visa versa. This is actually most amusing. 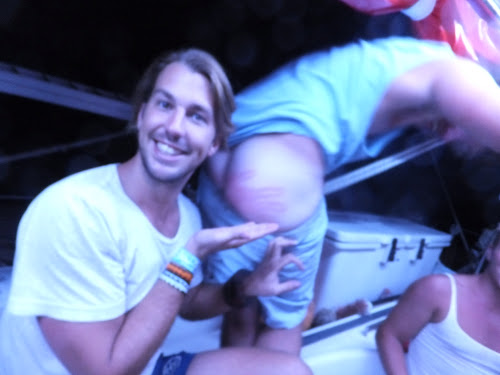 Jeremy had to spank Will 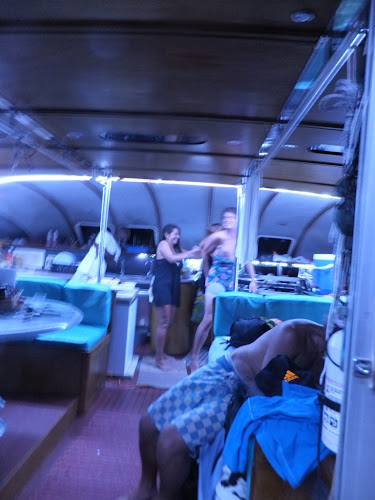 Will had to wear Jaz’s dress.
There is also an amusing video of when Chris an Jeremy had to eat a banana like spaghetti from lady and the tramp, but alas try as I might I can’t get the bugger uploaded. I’ll update this late.

Luckily, I got away fairly free from the worst of it, though some poor girl had to lick my armpit. Sucks to be her!

The Earth Ship
Whilst visiting Lubuataan in southern Belize I was prompted to visit The Earth Ship by Charlie, the local farmer that had given me a lift. Earth Ships are houses designed to be selfsufficient concerned built and use as much recycled material as possible. Apparently the archuteque is American but he has designed houses all ofpver the world. this project was one year in and was a self build by a couple seeking to get away from it all. 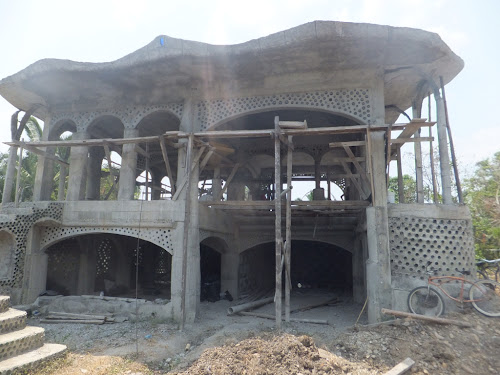 Made from old tyres, cement and many many glass and plastic bottles. 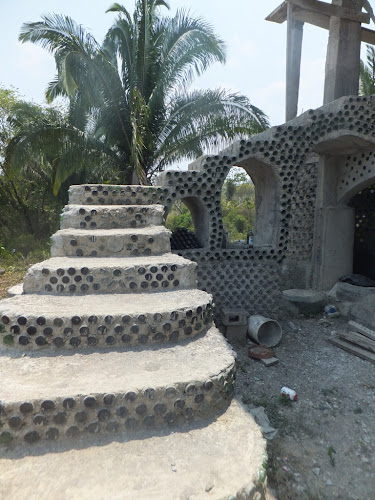 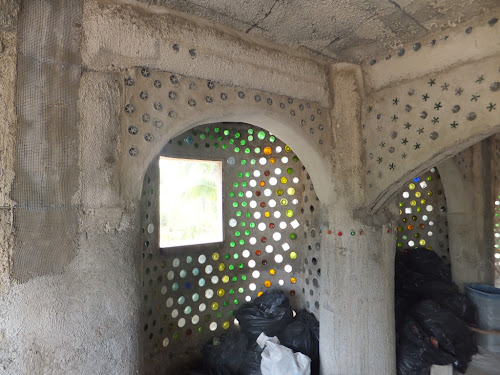 Pretty lights au-natural!
The basic design for this build was modulure so thy could add to it when they liked. It’s already twice as big as originally planned. Good luck to them!
More details on Earth Ships here.

The Jelly Fish
Welcome to Belize! I had been there less than a day and for the first time in my life I got stung by a Jelly Fish. I don’t now what it was but I can tell you it stung like ! I’m not a man that likes to cry in public so I jumped out the sea and into the shower until I regained composure. A lavish smothering of antihistamine latter I needed a large rum to steady my nerves. 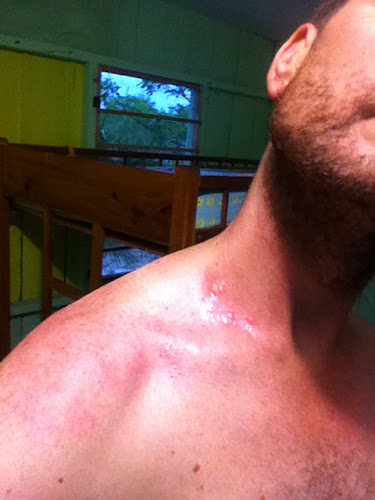 Look! It’s all red. There on my neck. The red bit! Blisters!

Ok, I’ll admit it, I’m a but of a wimp. But it did jolly hurt.
I was back in the water the following day though.
Emergency Services
I’m a big supporter of the Emergency services. I’ve run a foul of the police, but I still respect them. I’ve been rescued by ambulance service more times than I care to admit and I love them for it, although one time I may have been a little rude (after being mugged). However never have I written their praises. I want to change that now by thanking publicly the 9th emergency service. Not quite as important as the AA/RAC (4th) or Dominos delivery drivers (5th) or a couple of others I’ve left room to add in later, the unsung heroes of the 9th Emergency service need praise too.
SEWERS.
My sandals broke. That bit of material that goes awkwardly between your toes snapped leaving me with little more than a flappy sole. In broken Spanish I pleaded for assistance and without even insisting thst I wash or sterilise them a local seamstress jumped to my aid. 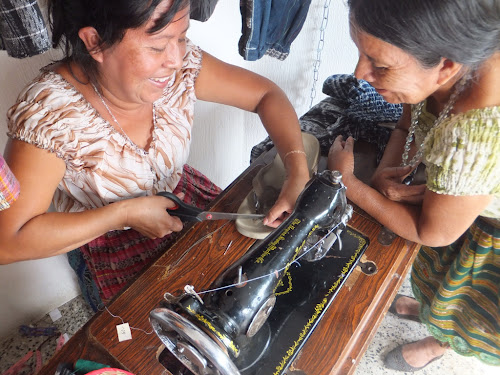 Happy in her work. The Operation was a success!

I love you Mrs Seamstress. You and your mother. And your mothers friend (both of whom where on hand to offer advice on how to perform the surgery).
Those that are about to sew, I SAULTE YOU!