We arrived in Antigua on a beautifully clear day and booked ourselves into The Terrace hostel, so called for its roof terrace bar. This gave us a lovely view of the three volcanoes that overlook the city and seemed an idea place to explore the city. We ventured out to research Spanish schools and to get a feel for the vibe of the city. Antigua is very pretty, with mostly cobbled lined streets with lots of horse drawn carriages transporting goods as well as people, along with cars, buses and vans and bikes. It fairly busy but also still quite laid back – the cobbled roads make it near impossible for the traffic to ‘rush’. 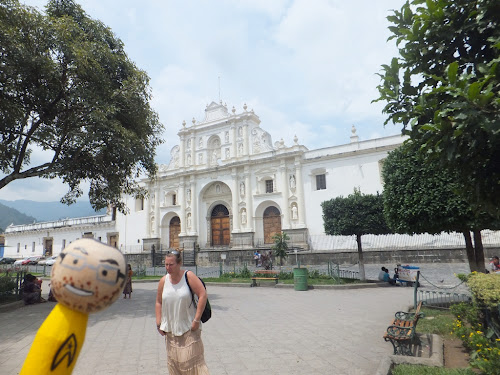 We moved hostel after one night as the Terrace is more bar than hostel and our room was on route from main door to the bar, meaning we got to listen to every drunk person coming and going. Not peaceful at all. We moved to a hostel called The Yellow House which was must more to our liking, first and foremost as it doesn’t have a bar! 🙂

We stayed for two days and then moved on to Lake Atitlan heading for San Pedro.

San Pedro is a small town on the shores of Lake Atitlan in Western Guatemala. The lake is surrounded by mountains and two volcanoes, one of which gives the town it’s name.

We arrived amid a storm. A pretty heavy storm! Our van was full, with about tourist all with bags strapped to the roof under a tarpaulin, it was getting dark with cloud cover and we were travelling on mountainous roads which were being haphazardly repaired (they would close longs strips of half the road with no traffic management in place meaning cars and lorries reversing and often needing to pull onto the stripped road (which had about a foot difference in road surface levels) so drivers had to move rocks to build ramps. It has stupid. Again, I felt like screaming at no one in particular “what the fuck!!!” However I resisted the urge to get out and start directing traffic. Once through the worst of it we then had to pull into garage to have the front break pads replaced. Apparently they were totally shot and it was luck (and excessive use gears and straining the gear box) that we had managed to stop in our decent. 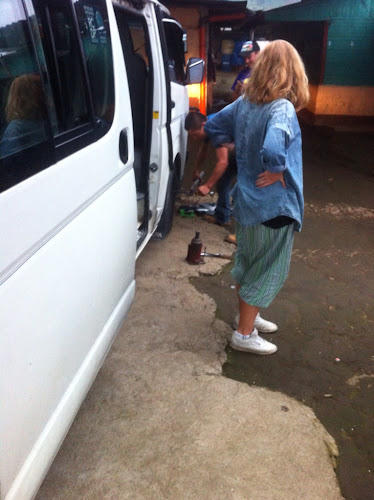 As the repair was made, the rain started. And it poured down.

We proceeded towards San Pedro but were blocked by a flash flood that had swept away part of the road. damn! We ended up going round the lake in the opposite direction to the next village from where we could get a boat to San Pedro. It was still raining. It was getting dark. We found ourselves (everyone from the bus) standing on a jetty waiting for a boat that might or might not be able to fit us in, and that would either be here in 10 minutes or 90, depending on who you talked to.

As luck would have it, it was 10 minutes and there was room. Cool! With only a minor trauma at the other end (an old chap with us slipped on the dock and almost fell in) we finally made it to San Pedro.

We had given ourselves two days to see if we wanted to stay in San Pedro and take a Spanish course or whether we preferred to head back to Antigua and do it there. First impression of San Pedro; Where on earth are we?? why do people come here?? The main town up the hill (we’re the locals live) was fairly normal. The lower town around the lake were the gringos hang out and where all the bars are is a nest of warren type paths, some of which are paved, some of which are lit, none of which have names. Talk about getting completely lost!

Luckily in day light the first day after arriving (and having gotten very lost the night before) we quickly figured out the main paths that we needed to know and my opinion very much changed to; this is pretty cool.

We found a hotel, signed up for a week of classes and decided to go on a little hike.

The Indian nose is a hill/mountain that overlooks the town and in conjunction with the other mountains kinda looks like an face of some laying down looking up, the the nose obviously being the nose on the face. I say kinda as you need to squint and use your imagination. 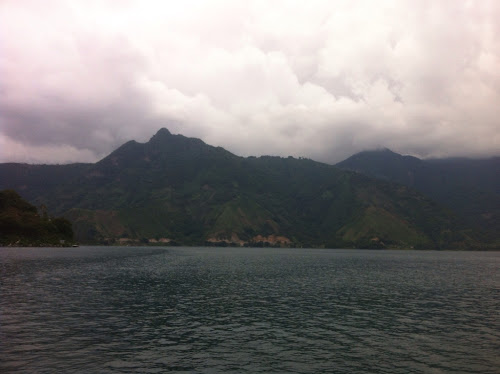 We took a bus to Santa Clara which is near to the nose and from there is was about a 45 minute was up from maize and coffee fields to the top. 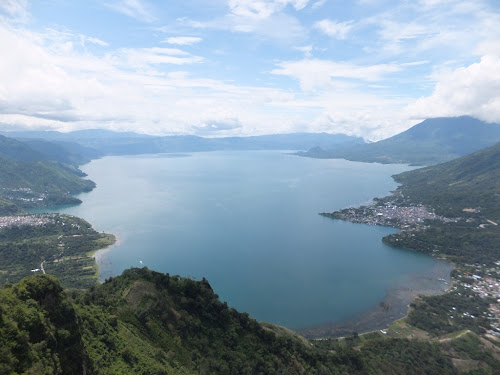 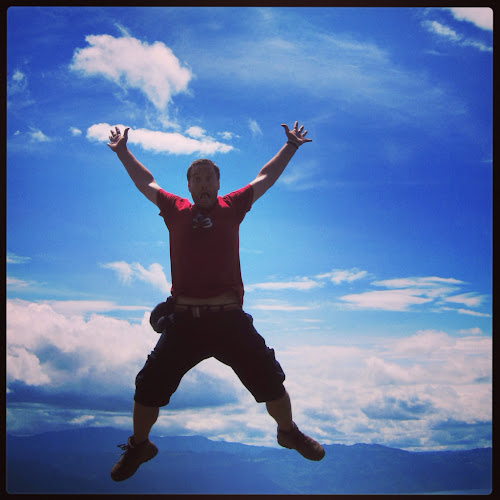 Me jumping flying at the top

I’ve always had a natural flare for languages. A flare to cock them up. Lets face it, I can’t speak English very well and have little to no idea on verbs, nouns, adjactives and conjugation. So having to learn this and the added confusion of word gender (masculine or feminine) it was jolly confusing. And then there is spelling; with accents and squiggly things. Shit. I am in a world of pain.

That said I did enjoy it and after a week of courses my pigeon Español now contains many more verbs, nouns and phrases but I still struggle to use the correct conjugation. More practice required! We are planning to travel and study a little ever day and then look at taking another week long course in a month or so. 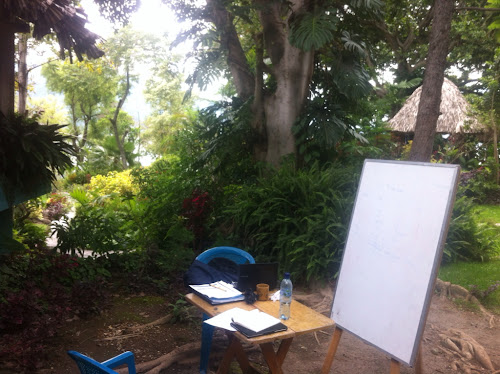 One of my ‘class rooms’ at escuelar San Pedro 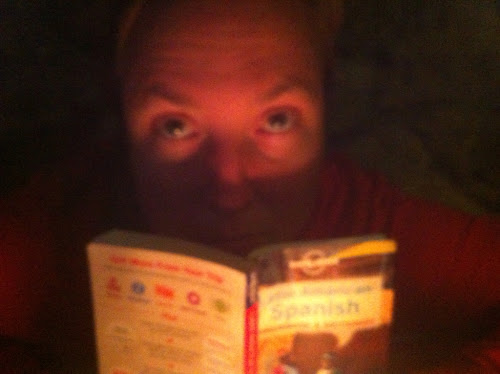 Kate studying Spanish by candle light in a bar

As I mentioned, San Pedro is a little warren like, but once you know the main paths its easy to get around. However, I think you could live there for months without going down or exploring half of the alleys/paths. These are a few of the ‘main’ paths. 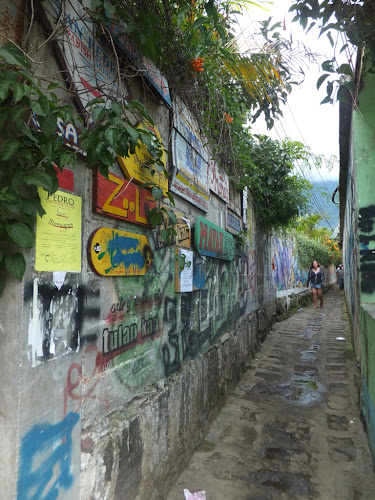 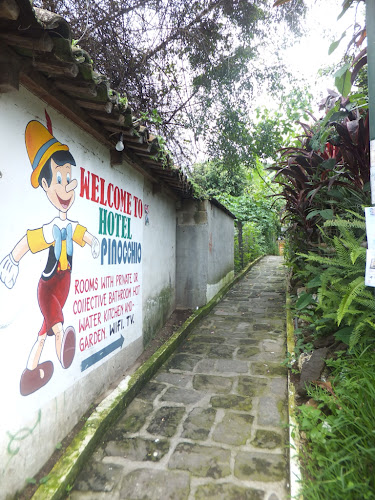 The path to our hotel

The entire week we were in San Pedro there was a festival on which meant lots of cannon firing and fire crackers at all hours of the day and night, parades and a fair. The fair looked like something that was sent to the scrap yard many years ago and had been reclaimed and repaired with mechanno. The locals seemed to love it but my love for life meant you wouldn’t catc me on these things if you paid me handsomely. 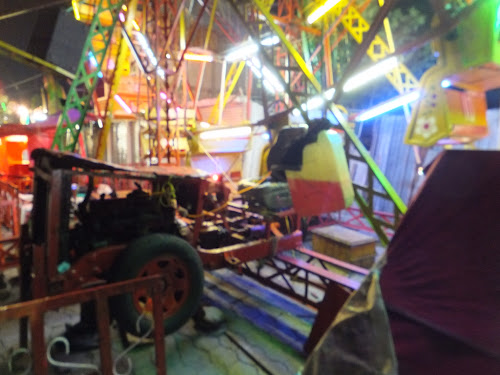 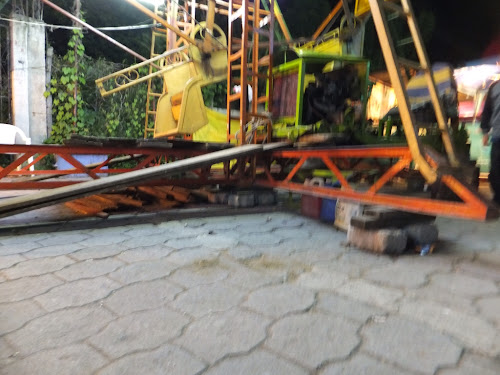 What’s holding this ride up?
We also watched then put theses things together and the crews average age might just have been 12.

That said we had some fun in San Pedro, even if we had a few sleepless nights. Now we are working our way to Honduras! We have stopped in Atingua for a few days but are staying in a hotel/resort just out of town in a cabana amongst an avocado plantation. It’s called Earth Lodge and is pretty remote. We’re going to stay here and re-charge our batteries (yoga, hammocks, good food and rest) and then head on toward the Rio Dulce. 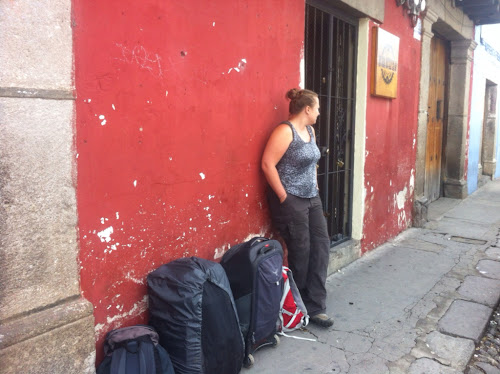 Waiting for our lift to Earth Lodge in Antigua, we hang looking cool and fitting in with the locals