I loved Belize, but I was glad to leave. For one, it was generally expensive. For two, they mainly spoke English which just felt like cheating. Now we are in Guatemala, Spanish speaking and easier on the wallet and I am happier 🙂 though I have to say, 3 weeks of not bothering with Spanish has set back my somewhat basic skills a step or two (if that is possible).

Flores; We got a van from the boarder to Flores (30 conzales each = less than £3) which took around 2 hours and dropped us right at the hostel door. On recommendations from some other travellers we stayed at Los Amigos which is a cool backpacker joint with a long happy hour, hammocks in the bar and a decent breakfast/juice menu. A private double room was g$120 (about £12 ). These are my kinda prices! 🙂

Flores is a tiny island on a lake in north eastern Guatemala. As soon as you cross the bridge onto main land you are in Santa Elena, and it’s not so touristy! We explored here a little during our stay and Kate posted some stuff home and managed to get her iPhone repaired for g$700 (about £70). Being a tight arse I am still unsure if I am willing to pay that kinda money to get mine fixed! (In case I haven’t mentioned it we both managed to break our phones; Kate dropped and smashed her screen and I got mine wet so the screen no longer works). Back on the island there are a few restaurants on the east side of the island, a smattering of tat-tourists shops throughout and some hotels and hostels. That’s Flores! There isn’t much to do on the island itself but its a good jumping off point for Tikal.

Tikal; one of the biggest Mayan sites in Guatemala that has been (and still is) being excavated and restored, Tikal is pretty awesome. It host the highest Mayan temple yet discovered (according to our guide; research required) and was once home to an estimated 200k population in its heyday around 500AD. It was also used in Star Wars! (I believe as the rebel base in episode IV). We got there for sunrise which meant leaving at 3AM and although during the rainy season sunrise is obscured by clouds is was still pretty awesome to be at the top of the main temple as the light came. We sat there for a good 20 minutes simply soaking in the scenery, listening to the dawn chorus and watching the night time butterflies flutter around as they sought a place to rest for the day. 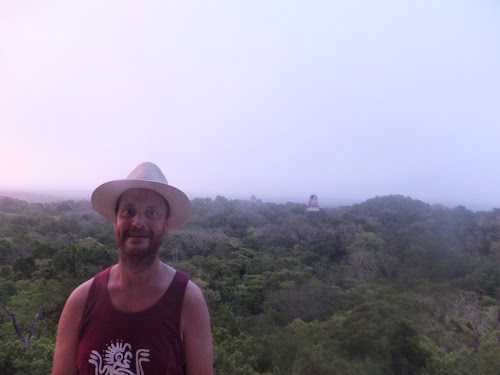 Kate managed to take this wonderfully flattering photo of me. 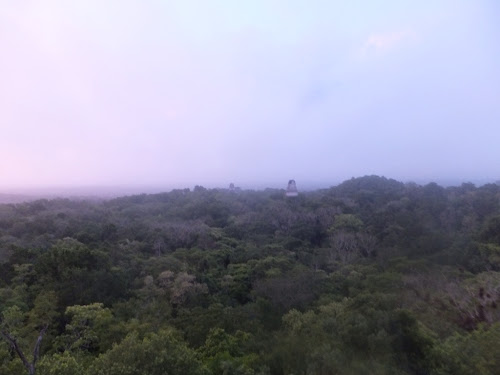 This one is much nicer; without me in it.

Semuc Champey; We only spent three nights in Flores and then booked a transfer to Lanquin, to the Zephyr River Lodge hostel, with the aim of going to Semuc Champey (supposed the most beautiful part of Guatemala). It certainly lived up to that. The transfer was 8 hours in total, costing only g$100 (less than £10) which it is pretty cool for a door to door service! Zephyr Lodge is cool. Overlooking a river (which flows too strong to swim in though) and has a really good vibe, great food and a 4 hour happy hour with Dark and Stormies for g$10 (£1). Day one we lounged and relaxed. Day two booked a tour to see Seumuc Champey and some local caves.

What an awesome day; I’m just back from it as I write. The followed a steam where we had to wade/swim and crawl through openings all by candle light (we each had to carry a candle!) and Semuc Champey certainly lived up to its reputation of bring totally beautiful – with water crystal clear and cool – which we spent a few hours swimming in and exploring. If you ever make it out here I can’t recommend it enough.

Now it’s time for beer and a cocktail or two (most definitely to include the afore mentioned Dark and Stormy!). 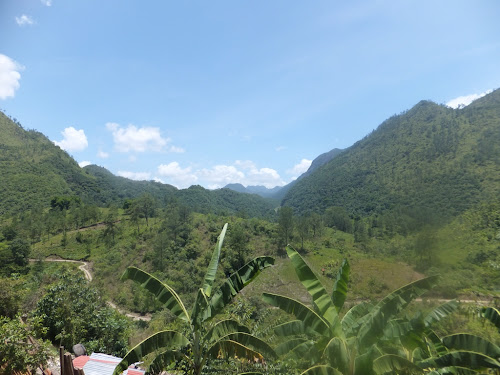 The views outside our room at Zephyr Lodge. 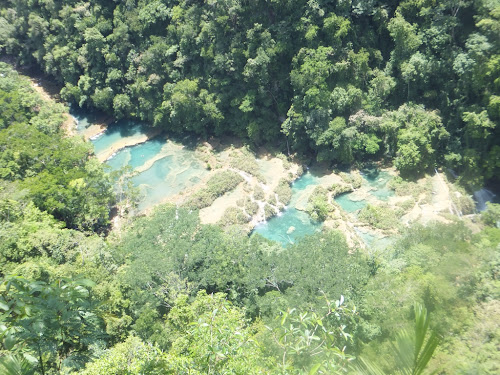 The pools of Semuc Champey 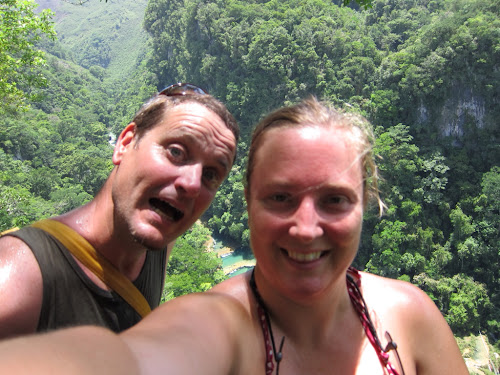 Us at the view point. Check out my new beard style! 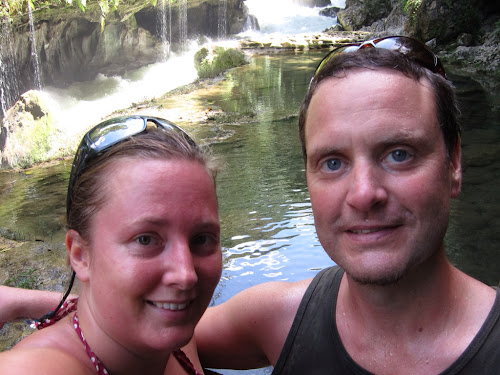 At the top pool where the river actually flows beneath the pools. The pool water is run-off from the mountains.

We’re going to stay here a few more days and relax a bit more, perhaps doing some ‘tubing’ down the river, and then we’re going to head towards Antigua and look into a week intensive Spanish course.

One thought on “Guatemala – Flores, Tikal and Semuc Champey”