AFTER 6 weeks of being away, and 4 weeks of travelling since leaving Buenos Aires, I finally made it to Belize and I was in the small fishing village of Punta Gorda in Southern Belize that is off the main tourist drag.

Kate had been in the country a couple of days and was about 4 hours north of me in Hopkins (a popular beach village but still rustic enough not to be westernised) but she wanted some time to unwind and relax prior to me invading her space, so I agreed to loiter in the south for a few days. Because I am nice like that.

PG is slow paced. REALLY slow paced. I arrived on Sunday so if you can imagine a slow placed place that slows down some more you could possible imagine PG. there were only around 4 bars in the whole village and on Sunday upon my arrival none of them were open. Luckily my hostel was open, so I checked in and set out to see what else the town had for me. As it turns out, the village can be navigated in about 30 minutes and I found signs of a few shops and a couple of restaurants, but again, because it was Sunday only 1 of the shops was open so I picked up some drinks and nibbles and headed back to the hostel and took up residence in the hammock. It turns out that in Southern Belize there is a bit of a Mosquito frenzy whenever an English man arrives and before long I looked like a pin cushion and couldn’t concentrate due to scratching. 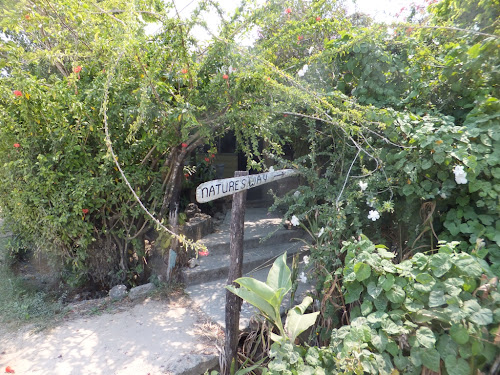 My hostel. Natures way. Home to many Mosquitos, and me.

Luckily I soon learnt they didn’t bother me as much if I wasn’t in the hammock so I moved to a bench in the front and enjoyed some peace. The next day I explored the town again and was rewarded with signs of life! A morning market for produce, more shops than I had found the previous day, this time all open and more restaurants, though alas because it was low season most of these remained shut. But the town had a nice vibe so I settled in to relax and read a few days away.

My guide book told me of several local Mayan ruins so on my second full day in PG I set out to see one of them. Alas there where no busses running to the nearest village that day but I was reliably informed if I took one of the other buses and got off at the needed turning I could easily hitch most of the way. So I did. 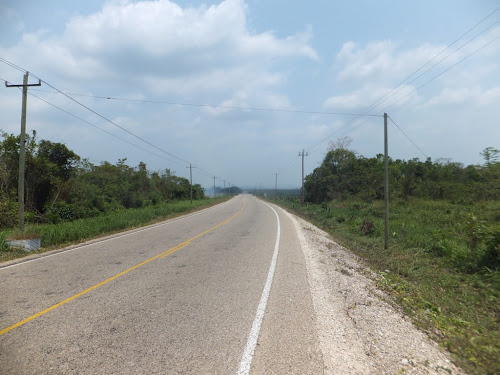 Turns out it was a looooong walk and no hitching possibilities in sight.

I ended up walking for about an hour in very hot weather before a local farmer offered me a lift – Charlie was his name, he was from Jamaica but had settled in Belize and had a wife, 5 grown children and an organic farm. He loved life and was a genuinely warm and friendly chap.

Lubutaan was pretty cool. I was the only person on the site while I was there so could enjoy it in peace and quiet with no one spoiling my views. The site was explored and catalogued in an era when it was acceptable (or common practice) to simply dynamite ruins to gain access to any riches stored within – which is sad. 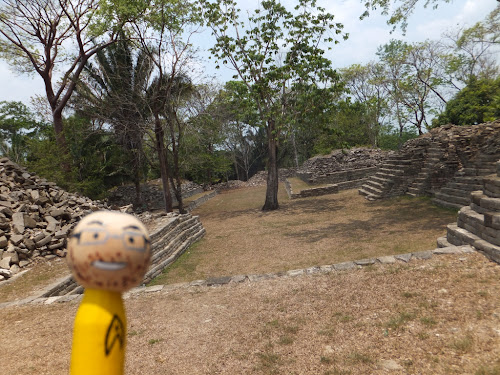 As luck would have it, I met Charlie again on my return journey and once more he saved me from a long walk and gave me a lift back to the nearest bus stop. All in all, a great day out!

The next day I caught the bus north to Hopkins where Kate was staying in a beach shack (Cabana) resort called Jungle Jeanie’s. The bus dropped in in the village and JJ’s was about a mile along the beach. For some reason I decided to walk, carrying both my bags, along the sandy beach, in midday sun. By the time i got there I was drenched in sweat and knackered – not quite the reunion conditions I had been imagining!! Still, it was great 🙂 Now this adventure can truly begin!!

We stayed in Hopkins for a week, relaxing on the beach, some diving around Southwater Caye and a hike out to Antelope Falls to find the plunge pool at the top of the 1000ft waterfalls (which turned out to be a series of falls starting at 1000ft) but the pool was blissful to swim in after trekking/climbing through the rain forest. 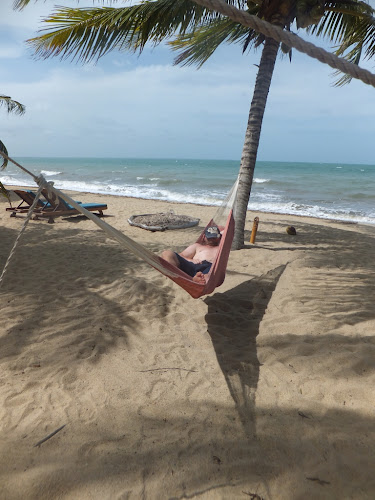 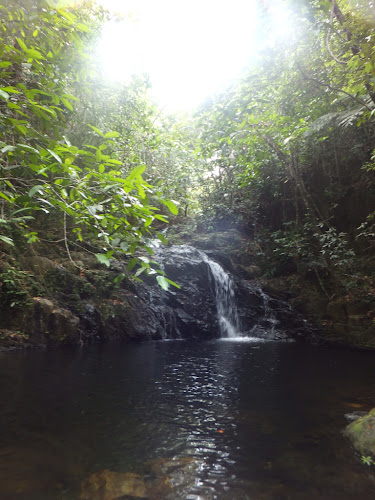 We then headed to the infamous island or Caye Caulker, Belize’s top island for backpackers/tourists. We rented a luxurious apartment/cottage (at £40 a night I was way over my daily budget – even though my half was only £20! – but it was with it for a week!) and planned to do some more diving, snorkelling and chilling – we succeeded in all of these goals including diving at the world famous Blue Hole (which whilst cool, was far from the best dive site we’ve been to). 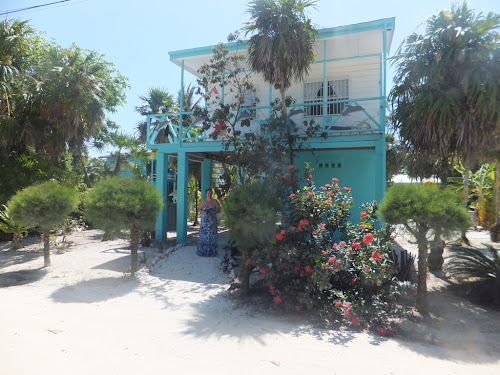 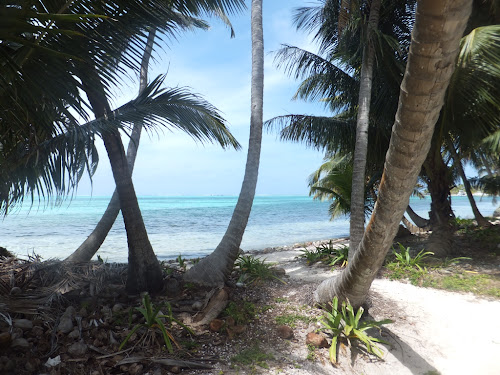 After a week on the island we moved inland with a plan to see some Mayan Ruins, visit the zoo to see animals that we would hear but probably not see whilst in the forests and do some of Belize’s famous caves.

We base ourselves at Bella’s backpackers which got slated on Trip Advisor but after a quick inspection of some of the ‘rated’ places it seemed the best choice, and it turned about to be pretty cool. It was under new management and the only really beef we had with the place is that the new cool managers (and their friends) often crowded out the communal areas to the point there was no room for the guests! A small thing though – overall a cool venue with lovely people.

ATM Caves; the Mayans believed that going into caves was entering the ‘serpent’ and going into the underworld from where they could commune with some of the Gods. As such, lots of caves have rituals and artefacts in them and the ATM Caves were the local spot where the upper class performed their rites. To get to the spot you have to swim into the caves and then follow the river deep inside, walking, climbing and sometimes crawling through the spaces all the while in the river. It’s was pretty cool! Alas no cameras were allowed so you’ll have to google it. At time of writing I don’t have Internet access to provide a link but will add one later.

Xunantunich; this is another really cool Mayan ruin near the boarder of Gautemala and Belize. At its centre is a temple ‘the Castille’ that the palaces at other local sites (within about 10k) point towards. It’s in pretty good condition and has been restored in parts, but again – isn’t over run with tourists. 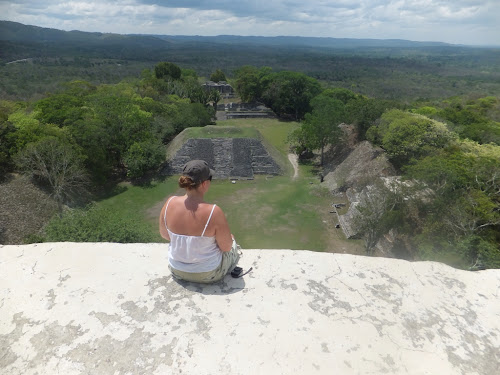 Kate sitting at the top of the Castille with no one else in view.

Cahal Pech; just outside the town of San Ignacio is a small Mayan ruin which we decided to visit because a) we could walk there and b) we (I) were hungover and lost the morning to moping around. Though small it is still impressive and much more compact than the other sites, with the main temple actually attached to the buildings around it. This gave it a much more functional feel and was fun to explore. Most annoyingly as soon as I got to the top of the temple my bowls had a call of nature that couldn’t be refused and I had to rush back to the visitor centre before brown-a-geddon. Luckily I made it. Of the joy of alcohol bowl syndrome.

Belize Zoo; This was back almost to Belize City but was only a £2 bus ride each way, and although I generally dislike zoos because all the animals seem so sad, Belize zoo is largely a care zoo for injured or captured and then rescued animals. IT WAS AWESOME. We saw; Puma, Jaguar, Black Panther, Harpy Eagles (which are HUGE), vultures, Tucans, Storks, Tapirs, Howler Monkeys, Spider Monkeys and Crocodiles amongst others. 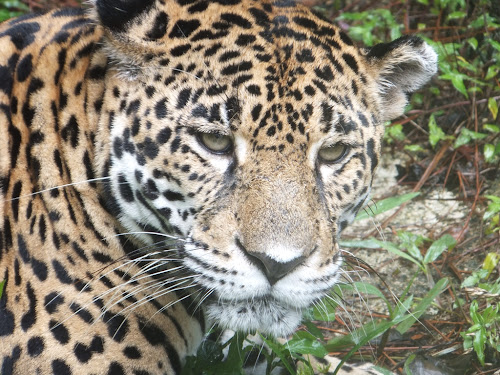 My best shot of the Jaguar!

Heading to Guatemala; after 5 days in San Ignacio we packed up and headed for the border. A painless transfer was achieved apart from the cheeky B$37.50 departure tax!

Next issue; Flores and Tikal and then onto Semuc Champey.