Ok, me been bad. I admit that having dutifully and even eagerly posted regular updates whilst in South America I have been somewhat tardy since reaching Central America. This is for two reasons.

Now it’s time to catch up. So I will write a few updates in quick succession this one will be an abridged travel update, picking up where I left off in Ecuador and taking you through to Central America. The second will be about my dash from Panama to Belize and the third will be the three weeks I was in Belize. So without further ado . . .

Having not meant to spend the night in Guayaquil I am glad I did. At first glance it’s quite a rough city and the guide books don’t help in their warnings of dangers after dark. Luckily by the time it became apparent I was to stay over it was late, and I simply found a hotel and crashed out. To date, the stark hotel I stayed in is the most expensive hotel of my whole trip but I was glad of it at the time. In the morning I ventured out and throughly explored the city river front and the old town – climbing to the top of hill in blistering heat and 80% humidity to see the views and grab a few pictures; 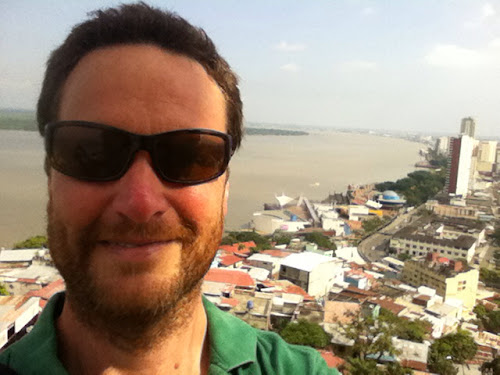 Guayaquil
That evening I got to the bus terminal in plenty of time to retrieve my luggage and finally left Guayaquil 24 hours later than expected heading for Quito on a night bus that was supposed to be ‘semi cama’ (semi sleeper seats). What a load of rubbish. A smaller seat with less leg room I have yet to discover. The problems with booking coaches is that until you actually get on the thing you never know what quality to expect – regardless of promises told by the ticket office! So it was that about 8 hours later that I arrived tired and a little grumpy in Quito.
I had booked myself into the ‘Communal Hostel’ and was so relived they let me check in when i arrived at 7am with no additional charge. This is undoubtedly one of the best hostels I have stayed in. Laid out over two floors with communal areas styled like a cool house and super comfy beds this was heaven. I ended up staying two nights. Quito is another odd place that guide books advise extreme caution after dark – and I decided to shun this and go for a walk in the local (old town) area around 8pm. Now, I’m not a skittish kind of fellow but after about 30 minutes of walking round the semi deserted streets (the entire place closes down around 6pm) even I started letting my anxiety get to me. I sped walked back to the hostel and decided I could do without dinner that night. It has to be said, Ecuador is the only place so far I have felt this.
However, Quito is a cool place during the day and an ideal launching point for Ecuadrian adventures. There is even a Cathederal and I went in it. Here is proof that i didnt burst into flames as I climbed the towers to see the view. 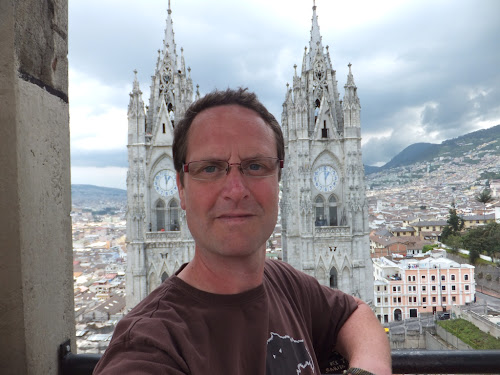 Thats my look of concentration.
Colombia
I caught an early bus to the Ecuador/Colombia border having read/heard advice that the journey in southern Colombia could be bothersome and possibly perilous. It turned out to be the most organised and hassle free boarder crossing in my travels. From the boarder town in Colombia I caught a bus to Medallion (20 hours) and then on arrival at around 4pm I booked myself on a another bus for that night heading to Cartagena (about 12 hours). The plan was to sail from Cartagena to the San Blas islands in Panama and then take a 4X4 to Panama City. I had two nights in Cartagena before the boat sailed however due to being fairly tired from the coaches and not want to get drunk the night before sailing, I spent them quietly. It’s worthy of note though, that if you fancy a party and illegal highs are a pass time you enjoy; Cartagena is the city for you 😉 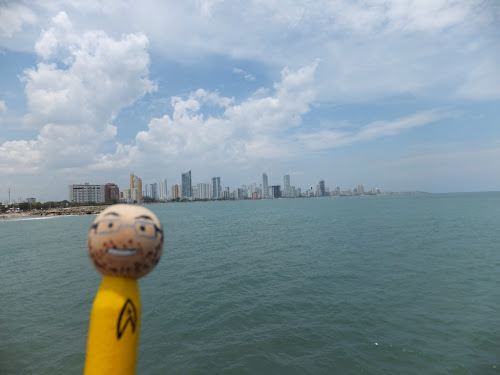 Stevepeg with Cartagena new town in the background (we didn’t go near there though)
Sailing to the San Blas Islands
It’s a two day sail from Colombia to San Blas, and we then had two days and nights there to chill out before heading to Panama City. The first day sailing started gloriously however as evening drew in we were skirting a storm that brought rain, a little wind and slightly choppy waters. A fair few people were sick and i was very glad I had decided not to drink the night before. I love sailing and must do it more. 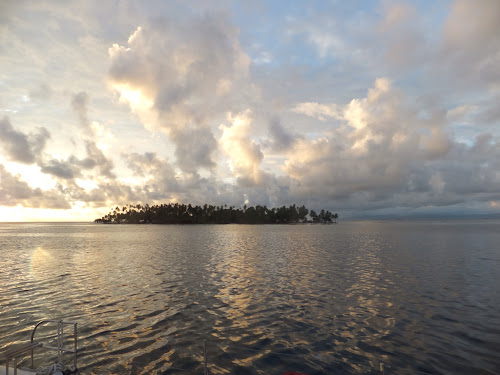 Arriving at the San Blas Islands
Once we reached the San Blas Islands we had a couple of days snorkeling around some beautiful islands followed by nights of eating good food and lots of rum and beer. The boat had a good crowd and a core drinking team that liked card based drinking games. Needless to say that most nights got messy for someone! 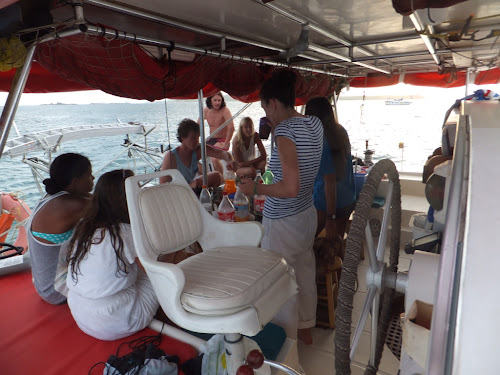 Getting ready for boat drinks
To Panama City!
Once we left the boat a convoy (of three) 4X4 picked us up and drove us to Panama City. The journey itself was pretty boring but most of us ended up staying at the same hostel (me mostly as I had not planned anything else!) but it was cool as I spent the next day exploring with a few of the group. More on that in the next post though!