So I left Hunachaco beach and headed into Trujillo town to get my next bus. I like to leave early to make sure I am on time, which also gives to time to look around. Having not stopped in Trujillo to look around when I arrived I figured I would on the way out. In short; there isn’t much in Trujilllo. I wandered aimlessly for a few hours. I sat in the main town square for an hour. I had dinner and stretched that to an hour and still I had an hour before my coach. I determined that I needed to relax a little more and not out myself in these positions. However, the coach did finally leave and I was heading for Mancora.

Mancora. Somewhere I read that from here I could catch a bus over the boarder directly to Quito. I’ve subsequently not been able to find this piece of literature since and as it turned out, you can’t. So I arrived at 7am and wandered up and down the main road looking for the bus terminal (which i soon realised doesn’t exist). The give away should have been that the bus I was on simpy stopped at the side if the road to let me and about 8 other people off. Mancora seems lovely – very much like Huanchaco; a surfing/beach town with not much else going on. I resolved to move on and catch a combi-bus to Tumbes from where I could get a bus onwards. The combi cost 10sols (£2.80) which isn’t bad for a two hour drive. We set off and all seemed fine until about 90 minutes in we hit stationary traffic. A LOT OF STATIONARY TRAFFIC. Turns out the driver new all about this and simply drove last them to the front of the queue where the was a temporary barrier made by the local village. 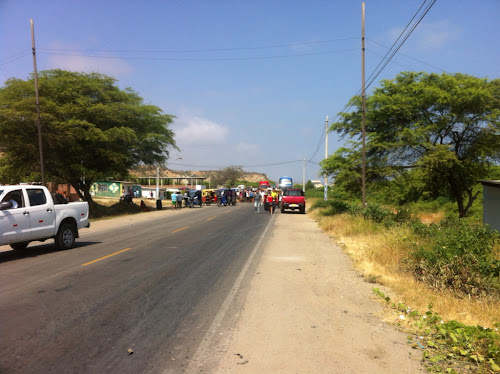 Looking back at the barricade 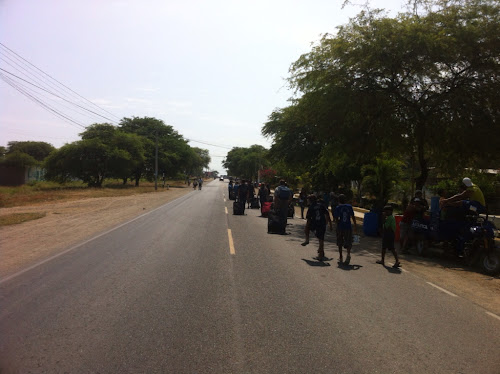 A group from one of the coaches making for the other side.

Protest. It turns out that lots of smaller villages haven’t yet been plumbed into the mains water supply and this is a big thing for them as it means there are still reliant on wells and collecting water. I agree this is bad, but MOVE THE FUCKING BARRICADE, was my main thoughts. Still, it turns out that wasnt going to happen and that no traffic would be going to Tumbes this day. The solution was to walk past this barrier, about half a mile, to the other end of town where there was a barrier blocking the road from the other direction. The we would have to get another combi to take us the other way. Some of the people on the bus where getting some money back, when I asked for some the driver told me not to worry. He had a taxi friend the other side who is was going to swap some passengers with and the taxi would take me to Tumbes for him.

How jolly nice I thought.

What a sucker I am he must have been thinking.

The chap walked with me to the other side and introdcued me to his amigo (I forget his name, lets call him Don). Don has a small estate and is with his wife. After the introduction I waved good by to the combi driver and we continued on. Don seemed nice, chatty in an annoying kind of way (he’s a Chelsea supporter) but nice enough. I tell him I am going to Tumbes and from there I will catch a bus – he tells me I need to get my passport stamped (which I knew) and he would drop me at imigration so I could do it. Nice, I thought.

We sailed through Tumbles and out the other side. “Where are we going” I asked. “To immigration” he replies – on the boarder (which is about 20km from town). “Woah, I said. But I want to bus from Tumbes!”. “Don’t worry” he said “you can get the bus from the boarder. It’s simple”. Hmmm this is all starting to sound wrong. I start preparing myself for either a full on mugging or a fight for cash.

We get to immigration and I get my passport stamped. And all is good. There are police around and I can see the boarder crossing in the distance. This rules out the mugging. Either this chap just is really nice or he wants cash.

I come out of immigration and Don is standing by the car with another fellow. He explains this this chap will walk me across the boarder and show me where t get the bus. But Don himself can’t go. However, he would like some money. HERE WE GO.

“how much?” I ask. “$100sol” (£30). To which I reply. MUCHO MUCHO MUCHO GRANDE!! We then get into an argument – him telling me all the things he’s done for me, me explaining I didn’t ask for any of it and had been been under the impression from his combi amigo that this was all paid for. He threatens to keep my bag. I tell him; like fuck. We go to the police and he starts getting sheepish. The police seemed to think that $100sol was quite a lot. At this point Don asks what I am willing to pay. We agree $20sol and don unloads my bag and storms off in a huff. If his car had been capable of wheel spins I am sure he would have done them, instead he settles for a moderate acceleration and an immediate U-turn.

As he retreats into the distance, I realise my Tilley hat is still on the back seat. This makes me very sad. Sorry Luke and Katie – your present to me was my first casualty of the holiday.

Now Don’s friend walks over and explains his guide skills will only cost me another $20sol. He got a firm NO.

So I set off for the border, which was actual about a mile ahead. Luckily a little tuk-tuk chap offered me a lift for $3sol. Much more like it. Crossing the border was easy and I had to then take a taxi to Ecuadorian immigration which is about 2k out of town – this cost me $5(USD). That’s right – Ecuador uses the US Dollar as their currency. Most odd. Anyway, I take a taxi out of town, get my passport stamped and then take a taxi back to town to the bus station.

If I want to go Quito, I had a long wait, however there are buses leaving now for Guayaquil. Why not I thought, and got on one – $8 for the 6 hour trip. 20 minutes later it turned out that I the 10 dollar note I paid for the ticket with (which I exchanged at the border) was fake so they asked me to pay again which I wasn’t happy with, but what can you do? All this foreign money is toy money anyway, how do you tell? (Quite easily on inspection as it turns out). I also had to change once on route (which they hadn’t told me about) but it all went smoothly and by 16:00 on Tuesday, having set out at 21:00 on Monday from Trujillo, I arrived in Guayaquil.

The troubles I had faced left me in a sour mood, so I thought that rather than stay in Guayaquil I would set out immediately for Quito (original destination) and leave that night. There was an overnight bus at 22:10 and I booked myself a seat. That gave me 5 hours to play with. Why not pop to town for some dinner I thought? Great idea. So I put my luggage into storage with the knowledge that I had to collect it by 21:00 otherwise I couldn’t get it till the next day. That gave me 4 hours, but having read that the city centre was only 20 minutes way I wasn’t worried. In fact, this is exactly what I told myself yesterday that I should be doing. Less waiting around, more turning up at the last minute.

As it happens; I was late. By about 20 minutes.

So I spent to night in Guayaquil without my luggage. More on that in another post when I talk about what turned out to be a nice stop over and where I conquered a hill to look down on the city . . . .