What an awesome place. I was tempted to stop in Trujillo itself for a night before heading to Huanchaco, but decided against it. Possibly because I was still a bit bothered by big town Lima and wanted to get to a small town, partly because I wanted I see to sea. For whatever reason I’m glad I did as Huanchaco is a lovely place.

It’s small for one. I like small. It’s on the beach. I like the beach. It’s cheap. I LOVE CHEAP. And when I got here (a 30 minute bus ride from Trujillo) it just felt good, right.

So here is a good time to explain about my bags. I’ve packed to much. Not WAY to much, but about a 25ltr day bag too much. This means its really quite a pain in the arse to walk anywhere with it all as I have my main bag, the aforementioned 25ltr day bag, and my most favourite shoulder bag/satchel. Thats three bags! My main bag has wheels as well as carrying straps which means as long as there is decent paving I can happily just wheel it along. But even then it’s a bit of a ball ache. Especially to keep having to walk into various hostels to start the simple dialogue of ‘do you have a bed, and how much is it’. I daren’t leave it outside.

I’m slowly in the process of losing stuff. I’ve already lost one pair of shorts and have earmarked a pair of trainers and a jumper to be next on the list. Once I get down to two bags things will be easier.

So I arrived. Without a reservation. At 08:00 in the morning. With all my bags. Without internet. Without a map. Where do I start? Shit. Dumped by the bus conductor who pointed me in the direction of the sea front and then left (as buses tend to do) there was nothing for it but to stroll to the sea. Lets take a look at that I thought, and then find somewhere to stay (whilst trying not to look like a lost little gringo in the process).

Enter stage left; Antonio. When I got to the beach I had Already passed a few hostels all of which were boarded up for the night and showing zero signs of life. There was one chap on the sea front selling hand made bangles, necklaces, and earrings. He didn’t look local; at 6ft, masses of blonde hair (possibly died) and very tanned he looked European. The first thing I said to him was “you look like you’ve been here a long time” To which he promptly replied something (I have no idea what) in very fast Spanish. Cue; awkward silence.

It turns out he did speak some English (I believe much more than he let on) and with my abysmal Spanish got across that I was looking for somewhere to stay, had no reservation and only limited funds. He then have me some pointers and simply his having made me try and converse in Spanish gave me the little boost I needed to get on with it. So I set out. goal; a dorm room for no more than a tenner. I ended up with a room to myself (triple) en suite and for about £7 – I was very happy with that. Later in the the day after a little wander I found one of the places Antonio had suggested and they were offering dorm beds for about £4. So he gave good advice!

I returned to meet up with him later in the day and duly purchased a man bangle from him as a thanks. It was my first bangle of this trip (it won’t be the last) and afterwards we talked some more. Kinda. He and his buddies became a little group I talked to (we all talked, I’m sure they understood more of it than me) every day as they walked around selling their wares and they also showed me where I could buy the cheapest booze, so it became a ritual that I would buy 2 litres of beer just before sunset (1 for me, 1 for Antonio to share with whoever he happened to be with at the time) and they would promptly take the piss out my pour Spanish. Cheapest Spanish lessons EVER (About £1 for a litre of larger) though I will admit I’m still crap. 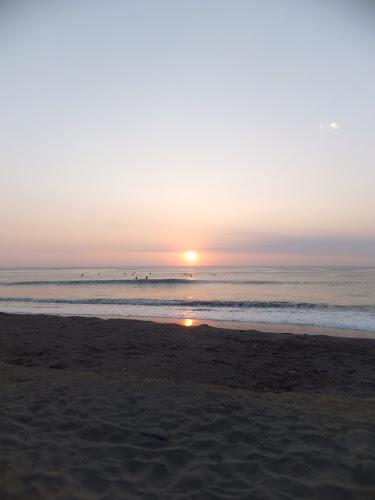 Sunset day one over Huanchaco beach

The town itself is tiny. It takes around 20 minutes to walk around and other than the beach and the bars there isn’t really much to do in town. There are some ruins nearby of inca/pre-inca origins but for the most part people come here for the beach and to surf. 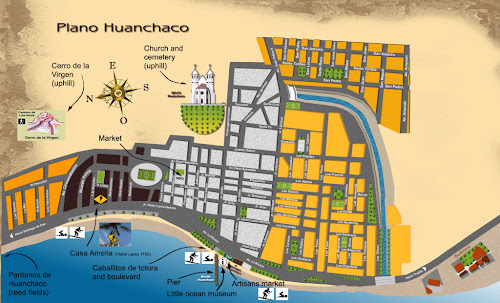 This is a handy map of the town

I came here to relax and though I did paddle in the sea (it was fecking cold) I thought better of going any further. You can hire a wet suit and board for about £5 (20sol) for two hours and if I was going to be here’s longer (or if we come back) then I would certainly do it. Alas the day after I arrived, I came down with a stinking snotty cold which put a little dampener on things. I managed to get one 5k run along the coast in before succumbing completely to it and the run was lovely.

And now it’s time to move on. I’ve booked an overnight coach travel to Mancora (further north up the Peruvian coast) and from there I will get a coach to Quito in Ecuador and from there onwards to Bogota in Colombia.

Kate’s flat sale has now gone through so it’s only a matter of time before she joins me and this adventure can truly start! So far it’s all just been leading up to this point . . .

My next big challenge is getting from South to Central America on a budget to meet with Kate in Belize. After some initial research it would appear this could be harder to achieve than I thought. The only good thing is I may have found a very luxurious way to do it for no more than a flight (sailing!) but it just takes a little longer – but it’s got to be worth it!

More on that later.