For those not in the know, or who can’t be arsed to google it, Lima is the capital city of Peru and sits on the coast (west coast of South America).

I’ve been to Lima before, back in 2006 when I came to Peru with the British Heart Foundation to do the Inca Trail. It was an awesome time, but we only spent 1 night in Lima and I didn’t get to see it at all. I wasn’t particularly keen to see it this time either, but as my bus trip had to go there and there was a 12 hour stop over I figured I’d use it to get out and see the sites.

The guide books tells me there are two main parts of Lima. ‘Central Lima’ is where the Plaza de Armas is and where all the colonial style buildings are and then there is ‘Miraflores’ which is down by the coast and is gringo central and more modern. As always, I gave the map a cursory glance, decided that they weren’t far away and it should be fairly easy to navigate between them by the central road which seemed to connect them so I would walk it all. Peasy. MISTAKE NUMBER ONE.

My coach into Lima left me midtown, kinda between the two, so I left my main luggage in storage and took off with just my day bag. It took me about 2 hours to get to central Lima, but I’d (semi) purposefully done a rambling walk to take in some on ‘rural’ Lima. All seems fine at this point…

Central Lima was actually quite nice. I easily found what I wanted (Plaza de Armas) and had a good look round at the sites. 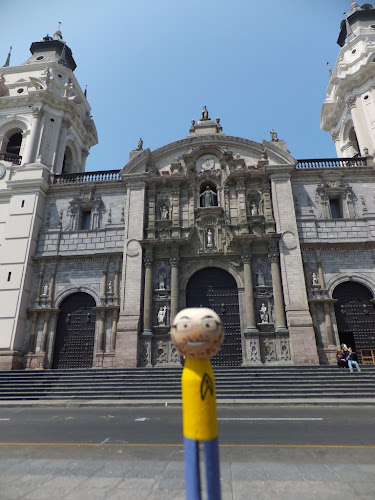 We also went in search if the river that is shown in all the maps that lies just behind the Palace, which is just behind the Plaza. River, bars, cafes; I was expecting a delightful place to stop. OH how disappointed I was. 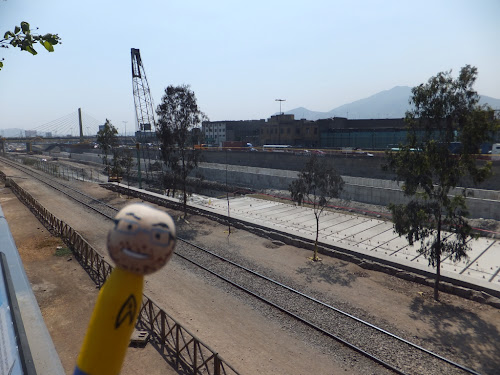 Not to be perturbed I found a Starbucks nearby and had a coffee. I was going to I ‘local’ but I really needed wifi to try and arrange some accomadation for the next night so I bite the bullet and went commercial. But by god the cinammon bun was nice. Coffee wasnt bad either.

After a short break, I set back off. It wasnt long after this that I started to feel a little tired. I hadn’t slept that well on the coach – probably around 5 inturupted hours – but it occurred me to that the bun I just ate was pretty much the only thing I’d had since lunch time the previous day. Silly Stevie.

Resolute that I would get something nice to eat in gringo town I set off to walk the other end of Lima.

By fuck is that a long way. I took my around 3.5 hours of stubborn walking (refusing to stop for something to eat and refusing to get on one of the MANY buses) – MISTAKE NUMBER TWO – for me to get there. On route I was also targeted by a couple of young lads who thought my bag looked too heavy and they wold help me out. Luckily I have my bag tied up pretty tight so when they tried to open it was they walked by me all they ended up doing was pulling me off balance. Iinitially I thought I had knocked into the so I turned round and in my best Spanish said “I’m terribly sorry” (ok, i actually said “I’m terribly sorry” – Spanish still doesn’t come naturally to me) at which point they started running. It was then that it dawned on me what had truly occurred. I’m not sure the locals who saw this where nodding they heads at the youth of today or at the stupid gringo. I didn’t stop to ask, I stomped on.

Having finally reached Miraflores I was most unimpressed with all the western chains; food and retail outlets were everywhere. It was all high ruse flats, malls and shops. Now; what did I expect? The guide books clearly state this is what it is – why did I come!!? New resolution kicked in; I will not eat here! MISTAKE THREE. I marched to the coast determined that at least I would get a good look at the sea for my troubles. 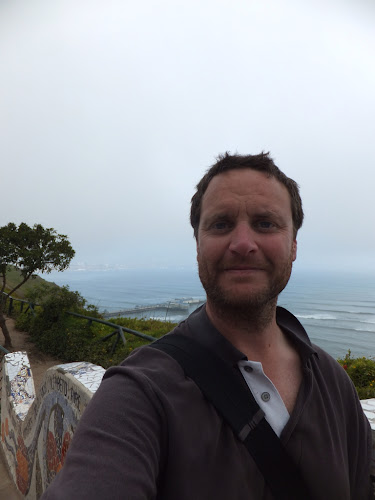 Mist! In Peru?? I am too tired, sweaty and hungry to even bother getting Stevepeg out.

Feel free to offer captions for this photo!

The camera actually makes it look better than it was. It’s a magic camera. The mist at the coast was pretty bad and the view was not much to behold.

Nothing for it then, I started back. It was getting late in the day and I need to reclaim my luggage and then move it to a different bus depot. I decided to catch a bus back. Great idea.. But which bus? Coming down they had all been heading here; Miraflores. Going the other way they seems to be going in lots of different directions – none of which sounded familiar. I decided to loiter at a bus stop to see if I could figure this out. Thats when attempt two was made for my bag! Bold as brass about it too. They moved on fairly quickly as I made it obvious that A) I saw them and knew what they where doing and B) I was twice their height and fucked off.

I decided to walk back to let off seem steam. MISTAKE FOUR.

Lost? Me? No. I just took a longer route back than was needed is all. I was using a very poor map I should point out so I feel this is partly to blame for the longer route back. Not my skills. Honest.

Anyhow, I got my luggage, ended up catching a cab to the new depot and then had a couple of hours to grab something to eat before leaving. The new depot was just as ‘middle of town’ as the original with nothing particularly interesting around it so I slogged back into central Lima to grab a bite and the slogged back again..

All in all I was hot, sweaty, hungry and bloody tired at the end of the day. You can bet your ass I slept well on this bus when I finally boarded. I think I was asleep before we left the depot.

That bus was another overnight journey that brought me to Trujillo in Northern Peru and from there a local bus (20 minutes for about 30p) brought me to where I am now, Huanchaco. I’ll give you the details all about that later.

in short; Lima – this time, you werent my kinda town.