So 2016 starts with both Highs and Lows – and I am not talking about the deaths of celebrities*.

This year started for me in Cambodia on a high**.  We flew out just after Christmas and for New Years eve we were in Phnom Penh (Cambodia’s capital) with thousands of other people crowded in front of the Royal Palace on river banks of the Tolne Sap river (just where is joins the Mekong River which, many miles to the north, flows out of Laos) and whilst the fireworks were not quite up to Sydney or London standards, it was very cool in a much more ‘real’ sense.

The main display was short but full of big explosions, but by far the more fireworks were held in hand of the many thousands of spectators, who held sticks that would fire tiny fireworks every ten seconds or so for a couple of minutes after being lit.  Whilst this may sound incredible dangerous (and it must be) we didn’t see any casualties and even though many children were holding them, everyone seemed to be being reasonably sensible with them.  With people lining both banks of the river letting these fireworks off was really a fantastic sight to behold and the atmosphere was fun and calm.   It was also lovely to be out at midnight in shorts and t-shirts and nice and warm 🙂 and also not to be pissed, or surrounded by totally pissed people! 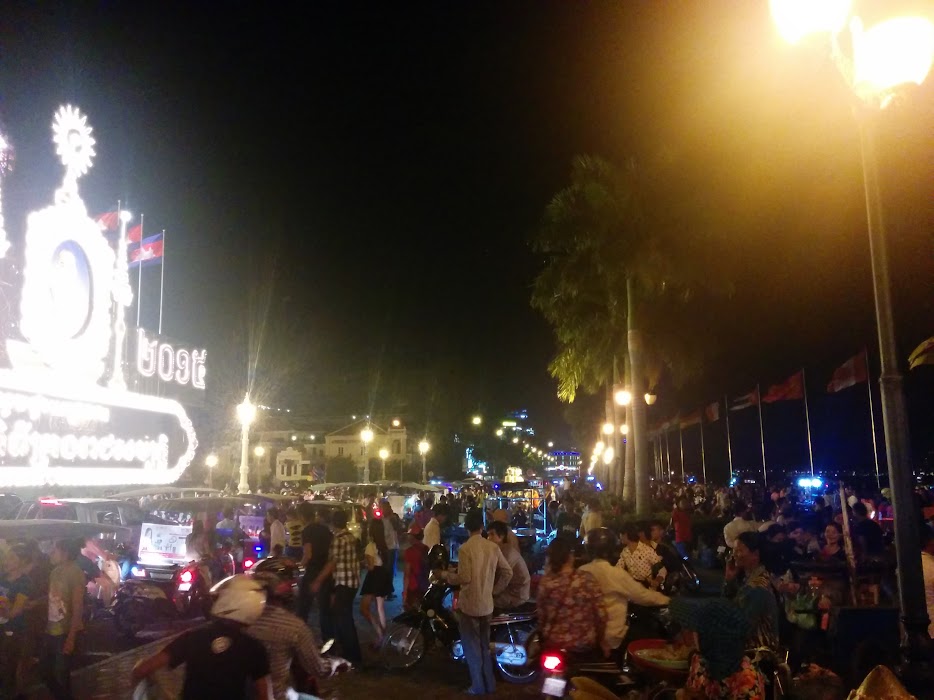 New Years Ever, Phnom Penh, Cambodia: The masses on the river front – almost as many scooters as people!

After New Year we then spent a couple of weeks exploring Cambodia – from its ancient Khmer temples around Siem Reap (and the famous Angkor Wat) to the idilic coast and beaches around Sihanoukville, then onto the coastal towns of Kampot (home of the Kampot Pepper) and Kep (famous for its peppered crab) before returning to the capital Phnom where we learned more of the recent tragedies of the 1975 Khmer Rogue genocides (we decided not to do this at the start of the trip).  I’ll write a more detailed post of our journeys later, but in short:

Which wasn’t the coming home which some of you might think (I actually always love coming home after being away).

It was an unexpected rejection.

I had been interviewing for a job which I really wanted, a job which appeared was made/written for me, and things had been going really well – if somewhat slowly.  I’d had three interviews through November and December, and in each things went really well and they gave me great feedback – so much so that I thought it was pretty much a done deal. Role forward to January and on coming home and I get the call to say that I had made it to the final two, but in the end they had gone with the other candidate.  Bummer.

Now whilst this isn’t the end of the world, it was a little bit of a surprise, and is a little inconvenient as I’ve been out of work for too long and had trusted that I would win through on this role so hadn’t put myself forward for any other roles – more fool me some would say.  This is the first time I can recall interviewing for a role and *not* getting an offer after applying for a job.  I don’t mean that in an arrogant or conceited way, its just I have haven’t had that many changes in job in my career (I’m a long term kinda guy) and I have been very lucky to be able to pick the roles I have gone for quite carefully.  So getting a ‘no’ was a new thing for me and whilst I would consciously fret over such a small thing I woke up in the middle of the night after receiving the call with a ‘what the hell am I going to do now’ coupled with a ‘what did I do wrong’ gut wrenching knot in my stomach.  Obviously my subconscious is a little more apt to worry than I would care to admit.

However, upon waking up and pondering my fretful night whilst walking the dogs in the morning I concluded the answers to my midnight woes are: ‘start again’ and ‘nothing’.

In the grand scheme of things this is just a little obstacle in the game of life, and on the whole isn’t serious as my subconscious would like to make out.  I didn’t do anything wrong,  you simply cant win all the time!  I am still solvent, and will be for a few months yet, and there are plenty of other opportunities out there – I just need to go find them! More importantly, I am still healthy, happy and have plenty of friends I can beg meal off should times get desperate*** 🙂

Onwards and Upwards! To infinity, and beyond!

* Bowie, Rickman, Frey; all great artists who will be missed, but in truth, their passing isn’t really going to effect my day-to-day.

** not drugs or booze – just joy and happiness

*** Things are a loooong way from desperate but if anyone fancies cooking a meal for me, or taking me out I will not object 🙂