So, I am once again a little behind! As I write this it is the 3rd October and I have lots to tell as we have crossed three borders, found some fantastic beaches, drank rum, explored castles, got lost up a mountain, got stuck on a cable car and had my fortieth birthday! However, I can’t tell it all at once so I will break it into bits for you. First I must take you back 6 weeks to the last week of August to pick up where I left of; leaving Ometepe, in Nicaragua.

San Carlos and the batshit hotel

We left Ometepe by the ferry from Altagracia to San Carlos, a journey of 10 hours which went overnight. Most of the night a storm raged across the lake but we sailed away from it so it only dampened our boarding and first hour on the water. San Carlos is a small town at the mouth of the Rio San Juan on Lago Nicaragua (the river runs all the way to the Carribean coast). We arrived at 5AM where we had arranged with our hotel for someone to pick us up as they were sightly out of town on the opposite side of the river mouth. It’s a great location with lovely views out onto the lake and as there are no neighbours it’s very peaceful. We checked in and hard a hearty breakfast (the food was lovely here) and listened to some other guests who were also having breakfast and checking out. They were complaining about the bats, quite vocally, and we thought “bloody yanks, expecting no wildlife out here in jungle land! Idiots!”. Oh how we were wrong.

As we explored the hotel (it would be a few hours until our rooms were ready) its struck us that there was a strong smell of batshit. We know this smell well from all the bat caves we have explored both on this trip and others. It’s one of those smells that once it’s in your nostrils it stays there for quite some time, and because of this you don’t notice that it’s not that the smell stuck your nostrils, it’s that everything (chairs, hammocks, beds, pillows, sheets, etc etc) do indeed smell of batshit. Still, even with this revelation (that came too late for us to be able to change hotels/hostels) it’s still not the worse place we have stayed (though perhaps it remains the most infamous to us). Luckily we were only here for a night. I tried not to unpack anything that wasn’t essential and kept my bags sealed as tightly as possible for the duration of our stay.

San Carlos is a small town with two main purposes. 1; Gateway for exploring The river San Jaun and its forests and villages, and 2; a river border crossing with Costa Rica. We were to use it for both these purposes. After showering at the hotel they kindly gave us a ride back arcoss the river so we could explore San Carlos. Try as we might, there was little of interest to find which confirmed our resolve to move straight on the next day and head for the village of El Castillio. 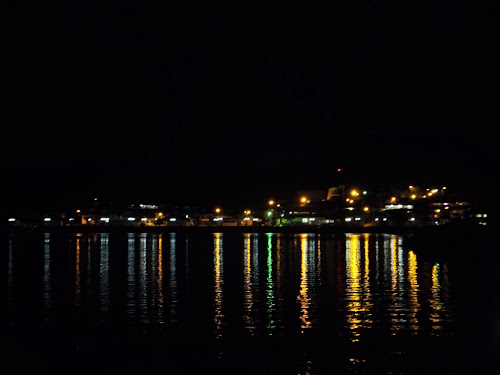 The view across the river from Batshit Hotel to San Carlos. 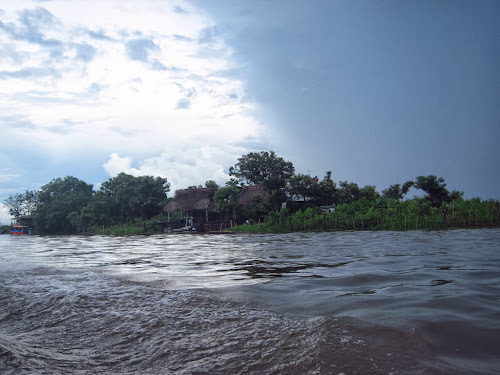 Now this is a beautiful village. The river here turns to rapids which are called ‘Devils Rapids’ and the village is the site of a Spanish fort built to stop pirates from the Caribbean making there way further upriver and plundering Granada (which they seemed to do fairly frequently). It’s has a great history which includes being taken by a very young Captain Nelson (a young and ambitious British Naval officer who would go onto to greater things) and also for a young Spanish officer’s daughter, who as a teenager took command of the defence of the fort during a night time raid which her father was killed and whilst still dressed in her nightgown (so the story goes) lead them to victory and repelled the attackers. The river was also were they first attempted to build a Pacific/Caribbean canal and though it was abandoned when the Panama Canal was completed it has left scars (graves of people and abandoned steam boats) along the length of the river. You can read a bit more about the history of this little town here

The view of the river from the fort 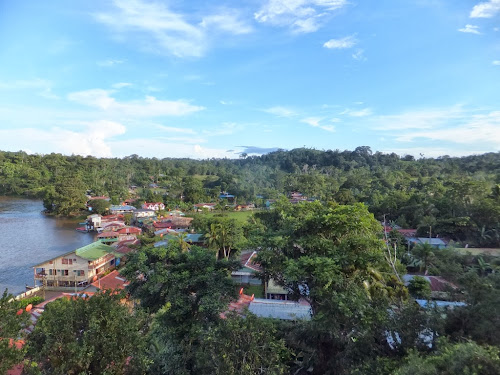 The town from the fort

The village is small, consisting of one main ‘road’ along the river and a few tracks off it. There are no roads to the town from anywhere and thus no cars in the town, or motor cycles, just horses and a few carts. Shops are small local affairs which generally sell everything you don’t need (as a tourist) and there were a few restaurants but with generally no one in. Off season El Castillio is pretty much a haven of tranquility. We spent a lot of time at a coffee shop called ‘Borders Coffee’ which has a pretty cool back story (local gay man sets up coffee shop and is taken to court by other locals as ‘gays can’t run businesses’ but he wins!) and does indeed serve the best (only) coffee in town.

We stayed in El Castillio for three days during which time we went on a rain forest trek which took us further down the river and a canoe safari which took us down a tributary of the river and saw us using planks of wood as paddles (ok, they were paddles but made of solid wood and were really heavy!). 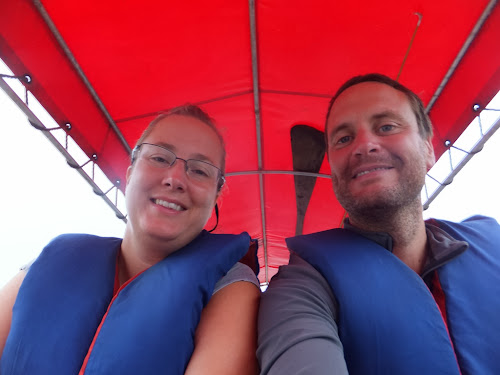 Before the trek on the boat (Kate is wearing glasses to aid bird and monkey spotting). 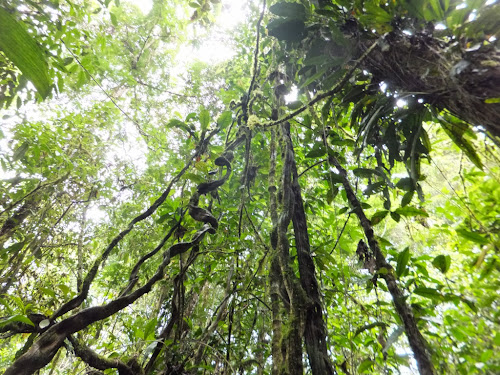 The trek! Lots of green stuff. Howler monkeys growling in the back ground but not to be seen anywhere 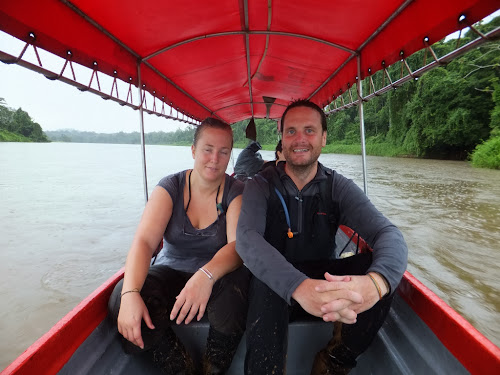 After the trek. Dirtier, wetter, but still smiling 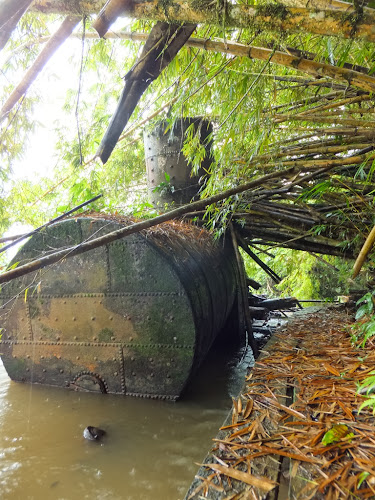 An abandoned steam boat. Abandoned after being damaged by the dynamite they were using to build the canal and left in the middle of the river. Since then an island has formed around it. 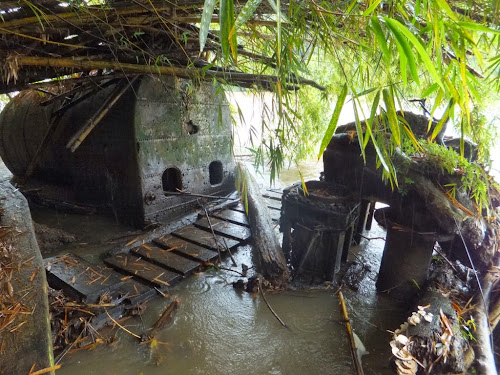 Back view of the steam boat – stoker holes and some engine parts.

Alas no pictures of the canoe ride as I left my memory card out of the camera!! Doh. Needless to say it was a river bordered by trees and plants with some monkeys, birds and lizards and we were in a canoe using the afore mentioned large bits of wood to paddle. Luckily our guide did most of the hard work.

Our third and last night in town was Friday the 30th of August, the eve of my birthday. And not just any birthday; my Fortieth! We decided to celebrate on UK time so that was 5pm our time. Lets do a pub crawl! Yay! We set out to do every bar/restaurant in town and have a rum and coke in each. We started at the dock and planned to work our way back to the hotel. The first restaurant turned out to be someone’s house. The next didn’t do alcoholic drinks. The next only had beers, the next had no tables, customers or staff (but did have music). It wasn’t long before we gave up and just bought a bottle of rum from our hotel to have with dinner, and then another (with which they also gave us a free 50ml bottle as a present), and then went back to our balcony and finished off a bottle we had bought earlier in the week. Pub crawl FAIL! but we still had a good night of it. 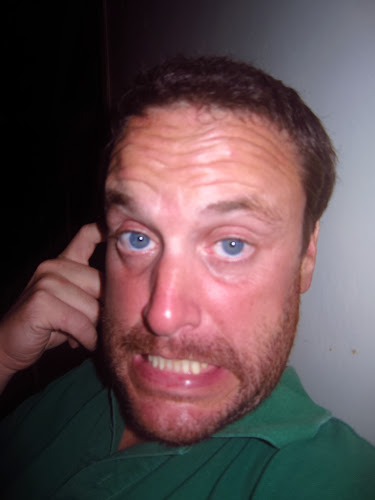 At the end of the night – I can’t remember what the question was, or my answer. 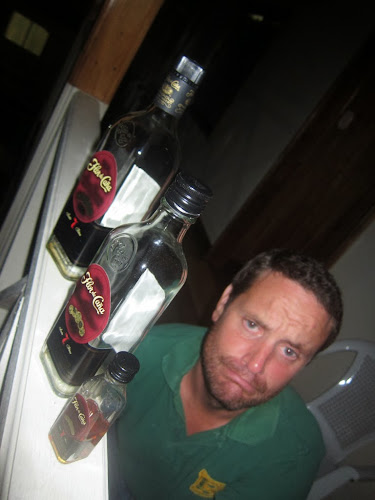 The rum is almost gone and I’ve just remembered tomorrow we’ll be travelling for about 12 hours. I’d still prefer to have more rum though 😉

Heading south to CostaRica on my Birthday.

August 31st 2013; 40 years old. No longer a 30-something but still a darn good looking chap and feeling surprisingly only-mildly-hungover, so all in all a good day. As we are travelling today we agree to put further celebrations on hold until we reach Panama City and rest for a couple of days before flying to Colombia.

We pack our bags wave good bye to El Castillio. The plan is to boat back to San Carlos (2 hours), then boat to El Chili in Costa Rica (90 minutes) crossing the border in possibly the most relaxed fashion of any international border crossing to date! The crossing can’t see more than 100 people all day (there are only a few ferries each day) and there were only about 10 people on ours – from entering the hut (once we found it) to leaving couldn’t have taken more than 5 minutes. From El Chili we get a coach to San Jose (5 hours) from where we’ll either stay the night or jump straight onto another coach for Panama City (16/17 hours). All goes according to plan up to San Jose where we decide to go straight on (figuring to get the pain of the long coach ride out of the way whilst we are still tired from travelling) but they only have 1 seat left on the bus!! Argh! So we are forced to stay in San Jose for the night (it really isn’t a fun city and especially not when it’s raining, which is was) so we went out for a damp and unglamorous meal on my birthday and got early to bed. We left on the midday bus the next day which arrived into Panama at 04:00.

In comparison to our entry into Costa Rica, getting into Panama took about 2 hours! It’s a much busier crossing with coach loads of tourists and locals crossing in both directions at once along with lorries full or cargo. The lines for immigration were immense and slow moving because of the detailed questioning everyone was getting. This is one of the only borders were we have had to prove our intent to leave the country within the tourist visa limit (called proof of onward travel) and the only time that ours has been refused as our flights were leaving from a different country so were not valid. It’s odd that for a country that must see so many tourists passing through without booked onward travel that they honestly seemed to not grasp the concept that we are travelling without a set itinerary between flights. Eventually though we persuaded them to let us in though we had to prove we could pay for ourselves whilst in the country and simply flashing our Visa cards seemed enough. All very odd. What was more laughable (though more common across all border crossings) was the utterly pathetic search of our luggage. You go to all of the bother to open your case for them to stick me hand down one side your bag and then say “OK”. Waste. Of. Time.

And that is where I will finish this one! Next blog will be a short one about Panama City (which I really like) and then another about our adventures on the Caribbean coast of Colombia!