So I boarded a flight at London Heathrow and a mere 14 hours (and 3 crap movies, 3 mini bottles of wine and one shit meal) later I arrived in Buenos Aires…. And it was raining. Raining to biblical proportions. Raining harder than it had for decades. This wasn’t the beginning I was expecting. On the up side; it was still warm and not snowing – so better than England.

A note to anyone flying into Buenos Aires; there is a bus to the city centre which takes around 90 minutes and costs only 15 pesos (ar$15 = £2) however you cant catch it unless you have a ‘subte’ card (local travel card) and these aren’t available from the airport. So your choice is a taxi (ar$200) or a private bus (ar$75). After much faffing around I took the latter.

I met up with Jay and Sara early afternoon (by the time I got to town, walked with my bags to their area and then proceeded to get lost) when they collected me from a Starbucks where I had been using their wifi to call for help. They explained to me how bad the rains where and that the road on which we were staying had actually turned into a river. Luckily we had an alternative so that is where we stayed and I have to thank them both for giving up half their bed to me (they were on two joint singles) whilst they crammed themselves onto the remaining single bed (note; we moved my bed to a different room – nothing dodgy going on here). We talked into the evening and they prepared a (vegan) meal for us which went down a treat and by 22:00 (having been awake since 8 the previous morning) I was dead to the world.

Day two saw us journey to our original flat to assess the damage and found there was none. The water had retreated and the building was perfectly useable. I spent the rest of the day wandering the city whilst JJ and Sara did some work. Below is a picture of me enjoying one of Buenos Aires lovely parks.

I met up with JJ and Sara that evening and went for a run with one of their neighbours, Pablo, around the Puerto Madero area of down town BA which was pretty awesome. BA is certainly a city that looks prettier and is more lively at night. Here is the route;

And here are the four off us after the run (the picture doesn’t do justice to just HOW red I was!) 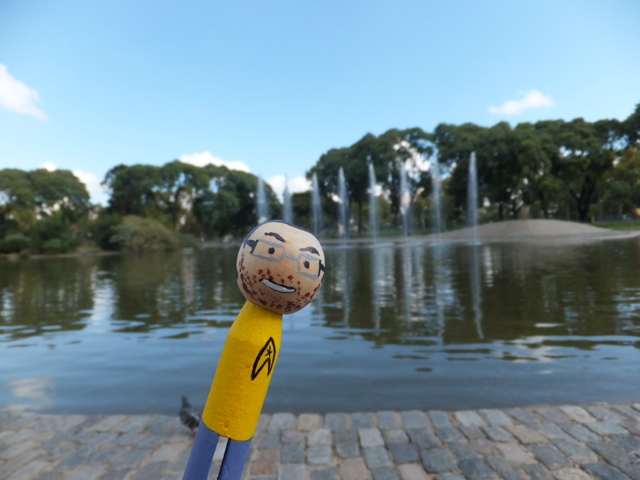 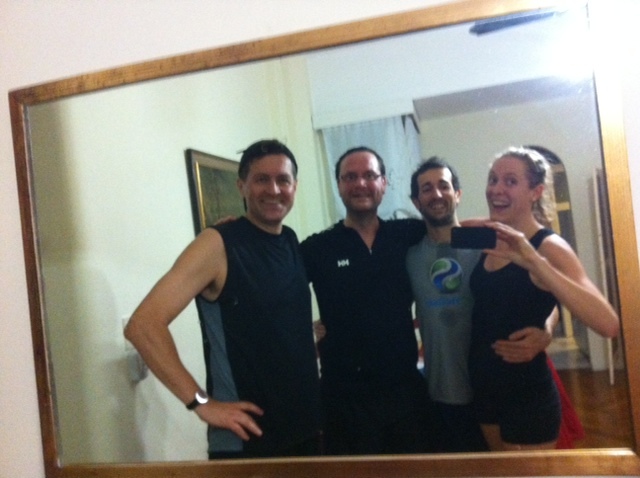