wouldnt it be nice if the banks did all collapse. lets face it, I dont have any money in them, I just owe them, so if they did suddenly cease to be I’d be off the hook! yay!

Of course. life as we know would have ended and I’d have to start foraging for mushrooms to stay alive. So perhaps I should just carry on paying the mortgage for now.

In other breaking news…

So – scoot has had his appendix out! In a very sudden move, he decided that the pain in his abdomen wasnt hunger (though of course he tried to eat something first to check) but there was infact something wrong. One quick visit to the Dr. and hey presto – marching orders to the hospital. that was Monday and here we are at the end of play tuesday and he is now appendixless. Oh the trauma.

I stopped short of taking his teddy bear to the hospital for him, but I did go along to see him to make sure he wasnt just skiving. Whilst there I took this photo: which I know he’ll appreciate me sharing with you. 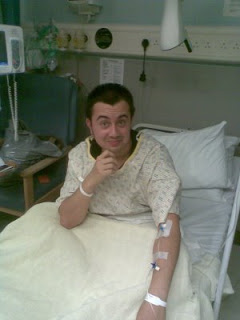 One thought on “I wonder if I should bother to pay the mortgage?”