Apologies for the lack of updates folks – alas this means this one is going to be a long one! Feel free to skip down to the photo for the synopsis. 🙂

So, let me set the seen. . . its Sunday 28th March – having just been on a stag night involving two curries (though still no drinking – what resolve!) I find myself preparing for my THIRD, yes THIRD, half marathon.

It was a lovely sunny morning, however 20 minutes before the start of the event the clouds rolled in and the wind picked up – it look like it might just rain on me, again!

I was once more a little apprehensive about doing the run. After my previous success at Tunbrdige Wells I hadn’t pushed or trained as hard as I thought i should have.

For a week after Tunbridge I struggled in the gym to do much more than 10k. Then, I was away in Austria for a week during which time I did no training at all! I came back from holiday determined to throw myself back into training and aimed for a 20k straight away – two laps of Richmond Park. Needless to say, this was slightly optimistic having been struggling with 10k’s over a week ago but that is the task I set myself!

And failed. I did a 10k (1 lap) and I was exhausted and started feeling a little frustrated and upset that I was struggling with such low distances when I should be achieving so much more. I should be running 10/15 miles not 10k!

I set to work at the gym and continued to struggle with long distance, so to take my mind of it I started working on fast short distances. Many moons ago I used to race Dave Anthony to 2 miles on the running machine and I could never break the 16 minute barrier so I thought I would work on this – which I did, and it felt great! Then came the weekend and I tasked myself another run – 15 miles from SW2 to Kingston Park, finishing with a lap of the park.

Another fail! I didn’t even make it out the door. I was suffering with a major lack of focus and enthusiasm. This was getting serious! I voiced my concerns to Kate and was looking for some inspiration, some drive; some reason to start running again! And ‘Team Steve’ was born on Facebook and she set to work inviting all my friends to join and show support.

If you haven’t already joined – why the F not? 😉

Oddly – this is the exact push I need. A reminder why I was doing it, who I was doing it for, and that there were people out there following my progress!

I went back to the gym and pushed myself to a couple of really fast 5k’s – plus started working out my core strengths too – something I hadn’t done for Months! I went into the weekend of my third half marathon having not run any distance for a month, but fully enthused again and raring to go!

So back to Windsor – its cold, I have a dodgy tummy from suspect curry no.2 and it looks like its going to rain – but to hell with that! I have run in the rain before and this is a flat course, I can do it!

And do it I bloody well did! 4 laps of the lake later I came in with a Personal Best time of 2 hours and 9 minutes 36 seconds. Bloody Marvellous. 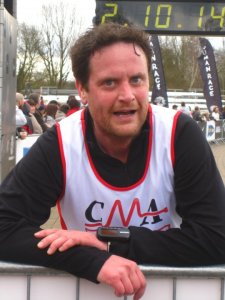 This is me at the finsih looking like it was a walk in the park. right?

I’m back on track! and Now have only two more long runs to go before the BIG day. Next weekend I take on a solo 20 miler from Streatham to Kingston going along the river Thames from Battersea park to Richmond. Then the weekend after I have a 16 organised run (with Human Race) around sunny Kingston.

AND I AM READY FOR IT!